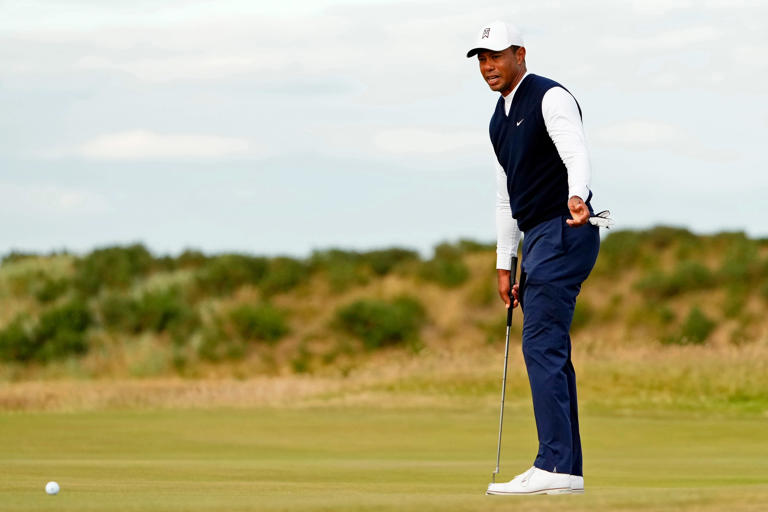 Tiger Woods was betrayed by his putter on day one at the Old Course.

If you want to sum one totally traumatic day for Tiger Woods at the 150th Open Championship, all you need is a look at his first and last hole on Thursday.

First, the draw didn’t do Tiger any favors — he went out in the afternoon when the winds picked up and the course was baking out.

Then there was the first hole.  His tee shot looked just fine, about like everyone else’s.  The world’s widest fairway is impossible to miss.  Tiger whipped his tee shot on line but when he arrived at his ball, it was sitting in a sand-filled divot and the sand had settled, leaving Tiger one ugly lie to start his day.

Tiger’s wedge sounded good enough and the dust and sand from the divot flew back at him, causing Tiger to turn away quickly.  When he looked back, he saw the horror.  Hit shot fell just short of the Swilcan Burn and one-hopped into the water.  Tiger dropped, hit his third.  His bogey putt came up three feet short and he missed the shortie — double-bogey.

“Hit a good tee shot down one, ended up right in the middle of a fresh divot,” Tiger explained after his round.  “And I hit a good shot. Wind gusts hit it and ended up in the burn.

Tiger had already broken one of his two playing rules right off the bat– no double-bogeys, no three-putts.

At the 18th, Tiger was in good position for a two-putt birdie from the more forgiving part of the Valley of Sin.  He putted to seven feet then promptly missed the birdie putt.

It was one of many three-putts.

“So I think I had maybe four or five three-putts today. I just wasn’t very good on the greens. And every putt I left short. I struggled with hitting the putts hard enough. They looked faster than what they were putting, and I struggled with it.”

Then there was the pace of play — Tiger finished past the six hour mark.

“A long, slow day,” Woods said.  “I had chances to turn it around and I just didn’t get it done. Probably highest score as I could have shot.”

His putting woes began during the practice rounds.  “I compounded problems with my bad speed on the greens,” he said. “I hit the ball in the correct spots a couple times, left myself some good lag putts, the correct angles and I messed those up.

“And so when I had opportunities to make a few putts, I missed them, and as I said I compounded with some bad lag putts. And just never got anything going. It feels like I didn’t really hit it that bad. Yes, I did have bad speed on the greens, yes. But I didn’t really feel like I hit it that bad but I ended up in bad spots. Or just had some weird things happen. And that’s just the way it goes. Links is like that.  And this golf course is like that.”

Tiger’s final tally read 78 blows, leaving him tied for 146th and in eminent danger of missing the 36-hole cut on Friday.

“I’ll have to shoot 66 to have a chance,” he said. “So obviously it has been done. Guys did it today. And that’s my responsibility tomorrow is to go ahead and do it.

Fan Support For Tiger Was Strong:

The crowds got behind Woods, they tried to urge him on, but he just couldn’t find enough birdies.

“They (the crowds) were fantastic, absolutely fantastic. So supportive,” he said. “Obviously they’re not going to be quite as loud because you don’t hear them in the middle of the golf course. They’re only on the perimeter.  But just the support coming off each tee and each green, when they were in proximity. Most of the tees they were, yes; but some of the greens they weren’t.

“But when the greens that they were, they were very respectful and very appreciative of all of us out there today, which was great.”

Phil Mickelson:  I Couldn’t Be Happier:

LIV-Defector-In-Chief Phil Mickelson didn’t participate in the champions parade nor did he attend the Champions Dinner.

After shooting 72 on Thursday, Mickelson got into it with a media member.

The reporter asked Phil whether he found it “very sad” that he was now in this position at the historic major – encouraged to skip a dinner he’d earned the right to attend and alienated from some of his peers.

“No, not at all,” Mickelson said. “I couldn’t be more excited and ecstatic with where I’m at. I love the (LIV) events. I get to have competitive golf in my life on a scale that is fun, exciting, different, and lets me play and compete but still do the things outside that I want to do. So, no, I couldn’t be happier.”

When the same reporter followed up about missing the dinner, Mickelson snapped back: “Let it go, dude. Let it go. That’s three times you’ve asked the same question. I don’t know what to tell you. I couldn’t be happier.”

Something you never see was seen and heard on Thursday at the first tee.  When Ian Poulter was introduced, he was booed by the crowd.  Poulter went on to shoot an opening 69.  Highlight of his round was making a 169-foot birdie putt at the ninth hole — longest putt ever recorded on television.

Ernie Els looked like he was heading for the top of the leader-board early.  The Big Easy was an impressive five-under par as he headed for the tee box at the famous Road Hole.

It was there that Big Ernie parked his drive into the green grass outside the Jigger Inn — out of bounds.