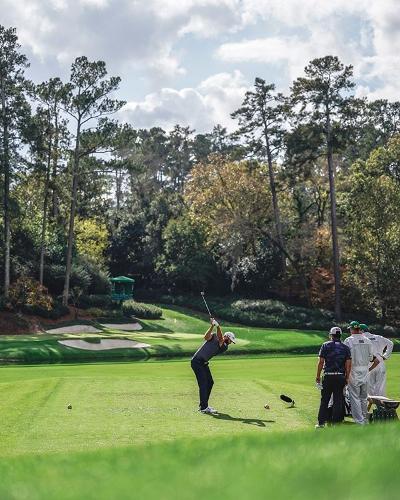 Once Dustin Johnson got past the par three 12th, he turned it on -- three under over the final six holes.

Now that Dustin Johnson has realized his boyhood dream and won The Masters, it’s pretty apparent that his grit and talent level should deliver more major championships to the world’s No. 1 player.

Twenty wins is a milestone — the PGA Tour gives you “lifetime” membership at that point.  D.J. now has 24 with the U.S. Open and now The Masters on his Hall Of Fame resume.

Johnson is 36.  He’ll turn 37 in June and he’s right smack dab in the prime of his career.  He’s in superior physical condition and at the least, he has five to seven really solid, potentially good seasons in front of him.  After his record-setting win this past Sunday at Augusta National, he said he’s hardly ready to kick back and tone things down.  No, he’s planning on getting after it for at least 10 more years.

Which begs the question — how many more majors will Johnson snare?

He’s already the betting favorite for the 2021 Masters.  There really isn’t a major championship venue that isn’t suited to his game.  He put on a driving clinic for four days on his way to that mind-boggling 20-under winning total, five better than the young guys who were trying unsuccessfully to run him down.

The birdie at the par three sixth turned his round from gloomy to glorious as he played five-under par for his final 13 holes.

When Tiger slipped that 42-long Green Jacket on Dustin, it may just be the catalyst for a half-dozen more majors, maybe.

Johnson has become an excellent strategist.  His demeanor is deceiving — has the best stride in professional golf and doesn’t let anything bother him.  He’s pure Teflon — stuff just rolls off of him.

The major season is now over and basically the 2020 season is over except that the PGA Tour has put together one of those super-seasons.  The cash-grab for the 2021 FedEx Cup is already in progress and with a $2 million payout last Sunday, D.J.’s not about the money any more.  He joins the rarified ranks of “Trophy Hunters.”

Here are some parting observations as we leave Augusta National and let them start prepping for the 2021 Masters, which is now less than five months away.

The Course:  It was cool to see Augusta National in the fall, really interesting to see the views minus 40,000 or so “patrons” on site.  The soft course conditions led to the record score, no doubt about that.  D.J. laid up on 13 — he had a “mud ball” and there’s hardly a mud ball to be seen in April.  The greens never got to “firm” status which just shows that those multi-million dollar Sub-Air systems can do only so much.  Sungjae Im was getting it up-and-down from places you cannot get it up-and-down from in April.  Same for Cameron Smith.  The lack of spectators and soft greens really helped those guys.  But overall, Augusta National was still Augusta National — just check the bite-marks on Tiger’s butt from the 12th hole on Sunday.

Sungjae Im:  An incredible display of short-game prowess and putting ability.  This guy hits a ball about as straight as anyone.  He has adequate length but is not a super-bomber.  Bryson DeChambeau should take note.  Sungjae plays virtually every week.  Why not?  He’s only 22 and has nothing else to do.  As a side note, he’s no longer homeless. He’s closing on a house at the TPC Sugarloaf — just north of downtown Atlanta in Duluth.  As we indicated earlier, the soft greens helped this guy get up-and-down from places he won’t get up-and-down from come next April.

Cameron Smith:  This kid was impressive.  Not a newcomer to The Masters.  He tied for fifth back in 2018, wasn’t a factor last year, tied or 51st.  Yet there he was — the main challenger to Johnson who refused to go away.  He hurt himself with a bogey at 11 and didn’t birdie 13.  He made an incredible birdie at 15.  Snap-hooked his second, missed the water and ended up on the other side of the Sarazen Bridge.  We’ve never seen anyone in contention on Sunday hit it over there.  He was remarkable with the putter, led in strokes gained putting through the first 54 holes.  Both he and Sungjae picked up a cool million each in their tie for second, that’s more than some PGA Tour events pay the winner.

Justin Thomas:  J.T. was darn good for the first two days but he’ll figure out that you can’t shoot 71-70 on the weekend and expect to win a Green Jacket.  There’s one on his horizon, sometime.

Rory McIlroy:  Even if you trimmed Rory’s opening 75 and changed it to a 70, it still wasn’t good enough for him to win.  Once again, he remains Masters-less.

Dylan Fritelli, C.T. Pan:  Along with Im and Smith, the surprise guys of the top 10.

Bryson DeChambeau:  Totally wrong approach.  You don’t arrive at The Masters trying to figure out which driver you are going to use.  Better get than done long before you get there.  Hopefully Bryson got a dose of strategic reality when he watched 63-year-old Bernhard Langer whip his butt on Sunday when they played together and beat him for the tournament as well.  Bryson’s “The Big Poop” of the 2020 Masters.  He’s swinging so hard at the tee ball that he probably rattled his brain, causing his “dizziness.”

Lee Elder:  Great announcement that he’ll join Jack and Gary next April as an honorary starter.  Watched him as he needed help getting out of a golf cart and he’s walking with a cane — hope he’s physically able to swing a club come April.

Abraham Ancer:  Was cool to see him contend.  Had a bad Sunday but he’s a cool cat — has his own Tequila brand (Flecha Azul) and drives a classic Porsche.  Not a long hitter by any means and another guy Bryson should pay attention to.

Tiger Woods:  And finally the defending champion ran into a nasty predicament at the 12th on Sunday.  Ironic as that was the hole that brought down his challengers last year and paved the way for his victory.  Tiger turns 44 next month and it’s obvious that he can’t play much of a schedule.  It’s also obvious that the talent pool is getting deeper and deeper on the PGA Tour and it will be very, very difficult for Woods to win again, we think.  We like this new version of Tiger Woods, he’s a much more relaxed, cordial human being.  He was a prince to amateur Andy Ogletree, who was nervous about his pairing with Woods the first two rounds.  But Andy related that Tiger came up to him, laughing and smiling and said:  “Let’s go do this thing.”  Great gesture that helped Ogletree go on to make the cut and win low amateur.  Not sure there are any more majors in store for Woods.  We believe that his “Jack Nicklaus in ’86” moment came last year.  It will be interesting to see how much or how little he plays in 2021.

And with that, we say “See you in April” to Augusta National.  Unlike in past years, we only have to wait five short months to see the Azaleas in full bloom and hopefully a crowd of patrons everywhere.