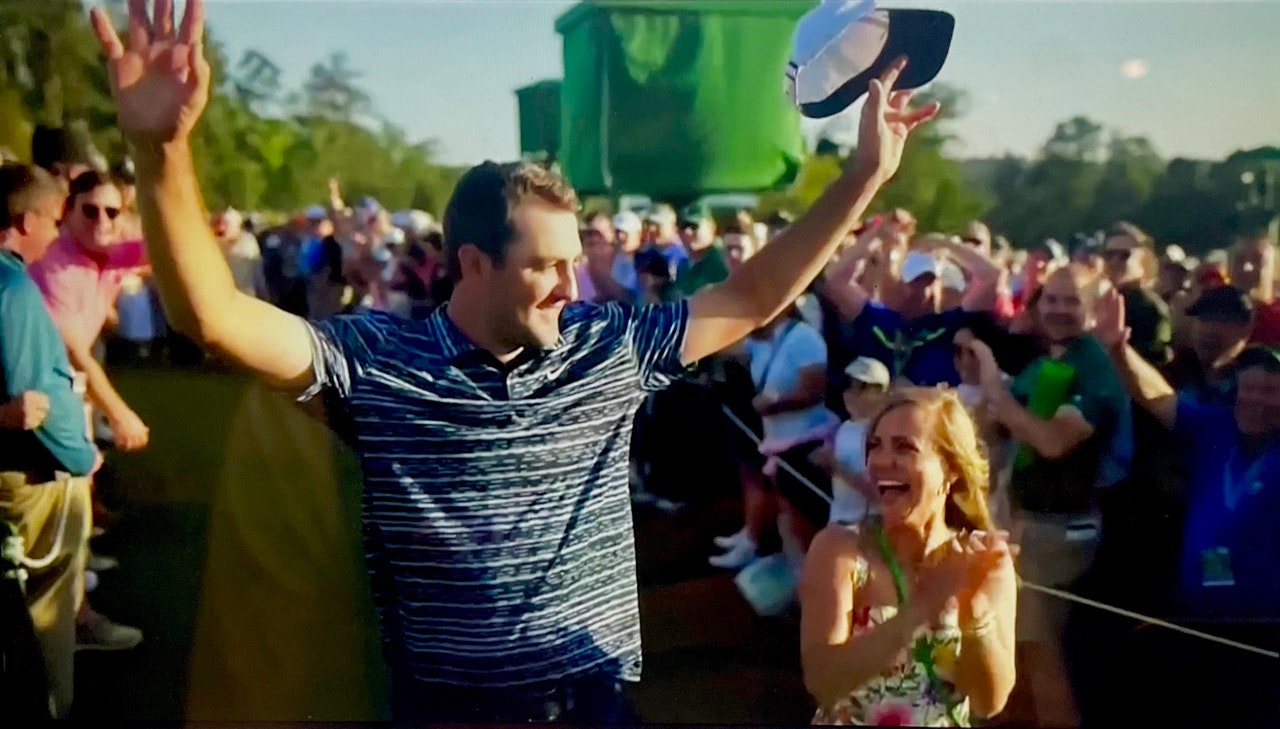 Scottie's wife Meredith reminded him of what matters most in life.

Scottie Scheffler looked simply unbeatable down the stretch late Sunday at Augusta National Golf Club as he made his way to his first major championship.

You know the shots, you know the scores but we got to know the young man a bit more in the aftermath as he confessed to his Sunday morning moment of self-doubt.

Scottie admitted to the world that he “cried like a baby” that morning before the final round.  “I just felt overwhelmed.”  He had a heart-to-heart with wife Meredith and whispered that he had his doubts about his ability to perform on the huge stage that awaited him.

Meredith had the perfect response in that moment:  “Who are you to say that you’re not ready?  Who am I to say that I know what’s best for my life?”

Scottie thought and about it and responded:  “If I shot 82 today — somehow I was going to use it for God’s glory.”

His faith and belief took over and he simply said to himself and Meredith:  “God is in control, and the Lord is leading me.  And if today is my time, then it’s my time.”

Sometimes talk about faith and belief in The Almighty can make journalists uncomfortable.  The world is changing in so many ways and fewer people are leaning on faith these days.

Scottie Scheffler has no issue when it comes to his faith, his beliefs.

There was a calmness about him all week, even when he began the final round — he basically couldn’t find the club face and hit wild drives on his first three holes.  He lost two shots of his three shot lead to menacing Cam Smith, who started birdie-birdie — the heat was turned up to “High.”  Then another wild drive at the third left Scottie looking for relief from the big scoreboard left of the green.

His second was ugly — short of the green.  Surely Smith was about to plant his second within 10 feet and make birdie.  It looked like par would be a struggle and bogey was a possibility.

Then like a bolt of lightning, Scheffler’s short game showed its class and he pitched in for birdie.  Obviously rattled, Smith’s pitch went 20 feet past the hole and he’d make bogey — Mongolian Reversal — Scheffler’s lead was back to three shots.  The big fella was ready to roll.

He was tested again at the 10th, where he saved par.  At the 11th Smith made birdie and Scottie faced a tough eight-footer for par.  He made it then everyone knows what transpired at 12.

Smith forgot to consult the Nicklaus-Woods manual for proper play at the 12th — HIT IT OVER THE CENTER BUNKER!  Alas Smith went Koepka-Molinari-Finau-Spieth and swiped a nine-iron that didn’t come close to dry land.  He walked off with a six and once again, Green Jacket hopes drowned in Rae’s Creek.

Scheffler’s short game is superb and he does what champion golfers know how to do — put a number in a box.  That’s how Butch Harmon talks about success in tournament golf.  Forget swing technique, multiple thoughts and so forth — you simply have to learn how to put a number in a box and Scottie Scheffler has proven he can do that so well that he’s now the top dog — A-Number One.

Unknown to many, there was a major tweak to Scheffler’s putter on the eve of the tournament.  Just to be sure, his guys check out the lie and loft of his Scottie Cameron and something was off but it wasn’t quite obvious.  A close examination revealed a slight dent in the shaft.  With Scheffler’s nod, a new shaft and grip were installed.  He putted magnificently if you don’t count the 72nd green.

We all wonder what’s next for the big Texan?  We’ve seen runs before.  Spieth had a big one.  So did Koepka.  Rory McIlroy won four majors in no time.  All have faded.  We believe Scheffler won’t.  He won’t try to change his swing.  He won’t switch instructors.  He won’t chase more distance — he has plenty.  He has won with new TaylorMade woods and irons but kept his Vokey wedges and the prototype Cameron.

Most of all — he has Teddy Scott.  When Teddy Scott took over as his guy on the bag, suddenly the wins came pouring — four wins in his last six events and one his first major.

At the end of the day — his upside is unlimited.

He has direction and he has the proper perspective.

For Scottie, it’s all about faith and family first.

Golf is just something he’s become really good at — even at the tender age of 25.