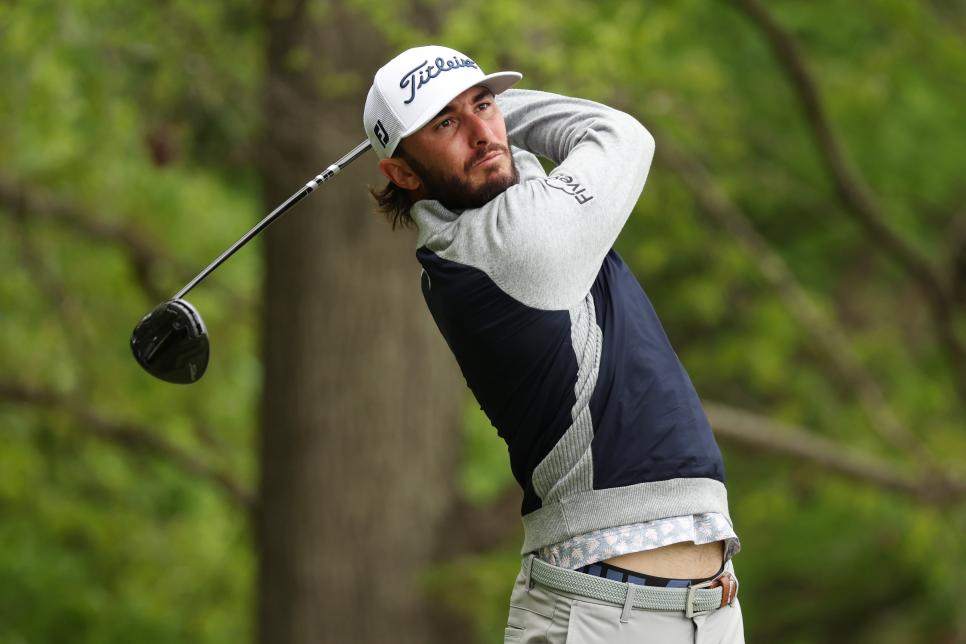 Max Homa benefitted from too many errors by Keegan Bradley.

This away-game version of the Wells Fargo came down to your basic two-man match on Sunday at TPC Potomac and it was steady Max Homa against club-spinning, foot-fidgeting, double-bogey-making Keegan Bradley.

In the chilly air and soaked grounds after a rainy Saturday it would be a contest of mistake-avoidance and by time they final pairing reached the 72nd hole — it was Homa with a one-shot lead and that’s all he needed as he finished with a par, Bradley put yet another bogey on his card.  Homa’s final round 68 was a grinding effort that took him to eight-under par — two better than Bradley, who fell back into a three-way tie for second with Cameron Young (66) and Matt Fitzgerald (67).

Homa won for the fourth time while Bradley’s comeback will have to wait.  Suffice to say Keegan is zero-for-four with 54-hole leads and he led by two this time — he’s also one-for-11 when playing in the final group.

Bradley’s mistake total was ugly — two double-bogeys, three bogeys offset by five birdies but it was still a two-over (72) day.

Homa birdied the first to cut the lead to one then at the par five second, Bradley made double without any penalty shots — Homa’s par made it a two-shot swing, he took the lead and never gave it up.

Both players birdied the ninth and stood eight-under heading to the back nine where Bradley took another nose-dive.  After losing his drive right at the tough par four 11th, his second found the stream right of the green.  He made a second double and Homa would stay ahead of him the rest of the way.

This was Homa’s second win at the Wells Fargo with this one being an “away” victory as Quail Hollow outside Charlotte preps for the President’s Cup in the fall.  He won twice in 2021 and is a rising star on the PGA Tour.  “Feels good,” Homa said.  “A special day (Mother’s Day) — I just feel like life’s good and I’m playing good golf.  I feel like I’m coming into my own.

“Keegan is a good golfer,” Homa continued.  “I just tried to play my game and see what happens.”

What happened was that Homa out-steadied Bradley, who found out you can’t make double-bogeys, especially a pair of them, on Sundays on the PGA Tour and expect to win.