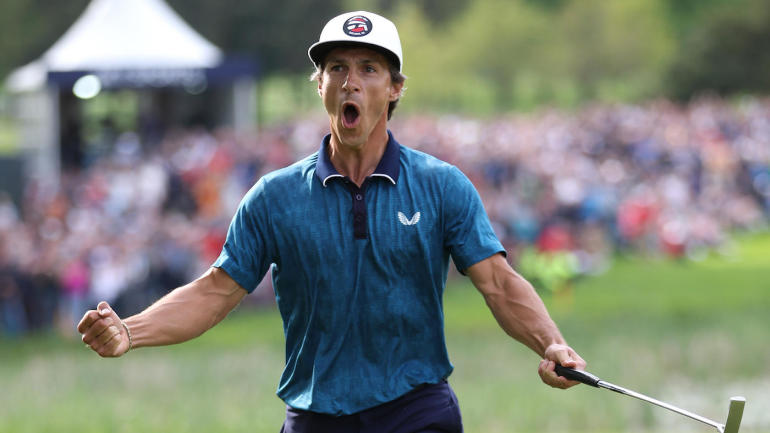 Thorbjorn Olesen whoops it up after holing the winning birdie putt at the 72nd hole.

Things were looking pretty glum for Thorbjorn Olesen with just three holes to play Sunday at the British Masters.

He had just bogeyed the 14th and 15th holes at the famous Belfry, stood four-over par for the day and was two shots behind clubhouse leader Sebastian Soderberg.  The tall Swede posted 68 to finish at nine-under par.

Soderberg saw Richie Ramsey implode with a double-bogey at the 72nd hole that dropped the Englishman from 10-under par back to eight.  And Olesen, the overnight leader, was leaking oil, badly.

Olesen made a great par save at the 16th, nearly holing his bunker shot — he lipped it out for birdie.  At the par five 17th he hit a perfect drive then his second found the green and left him with 28 feet for eagle.  He hit a perfect putt — dead in the hole — he was suddenly back to nine-under and evoking memories of his Saturday afternoon finish when he eagled 17 then birdied the 18th.

Another great drive at 18 left him 191 yards to the hole but his shot was too far right and left him with a 36-foot putt with at least four feet of right-to-left break.  He lined it up, read it perfectly then hit a putt that looked good all the way.  It took the big break then started tracking toward the hole and found the bottom of the cup.  Olesen let loose with a celebration to remember and a finish to remember as he signed for 73 and a 10-under total, a shot better than Soderberg.

“Incredible — what a finish,” was how Olesen described his first DP World Tour win since the 2018 Italian Open.  “It was obviously a pretty tough day and I hit a lot of shots to the left.  I was really struggling.  I somehow just kept going, and yeah, what a finish!”

Olesen kept his composure after the two bogeys at 14 (a three-putt from 68-feet) and 15, a par five where he hit a drive too far left.  “Standing on 17, I’m thinking I can made birdie-birdie and maybe get into a playoff.  But obviously when I go the chance on 17, I prefer to take that.  Eighteen is a tough hole so par is a good score, obviously.  I just gave it everything.”

Olesen, a former Ryder Cupper and rising star, hit rock-bottom when he was arrested after a trans-Atlantic flight back in July of 2019 when he was so intoxicated, he had no recollection of bad behavior on the flight.  He was suspended by the then European Tour but has worked his way back through a combination of practice and good behavior.

“It’s a massive tournament won by so many great names,” he said.  “It’s a privilege to have my name on the trophy.”

Steve Flesch Has Perfect Round, Wins At Mitsubishi:

Steve Flesch played pretty much perfect golf Sunday at TPC Sugarloaf and rallied from four shots back of overnight leader David Toms to win the Mitsubishi Electric for a second time.

Toms had a two-shot lead on the back nine but missed a birdie from six-feet at the 13th and missed another six-footer for par at 14.  Toms needed birdie at the par five 18th to force a playoff with Flesch.  Toms had a chance to go for the green in two but chose to lay-up and his third from 108 yards out left him 18 feet from the hole.  He missed and Flesch had the championship.

Flesch finished the second round badly and figured he had nothing to lose and decided to switch irons for the final 18 — he went back to his old set and it paid off.