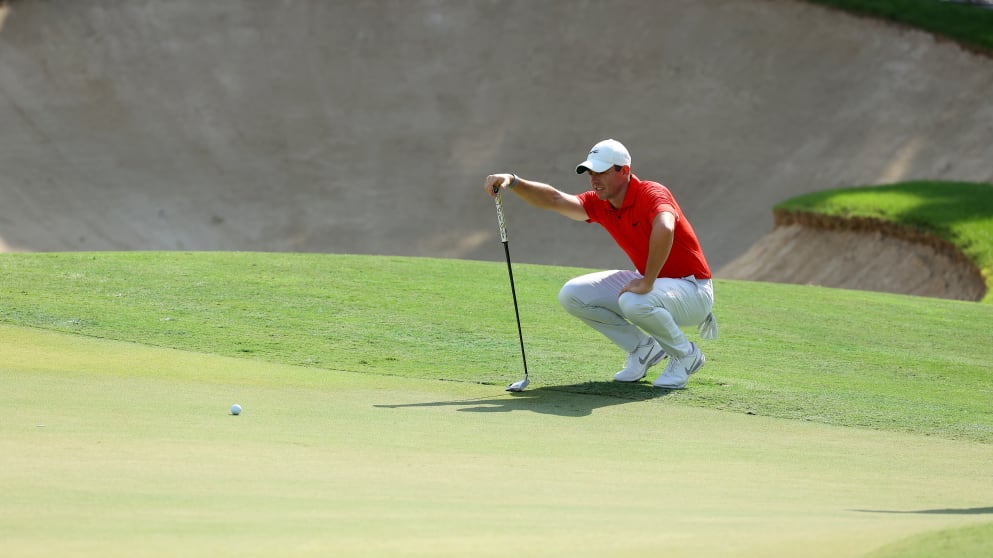 Rory McIlroy's putting has been very solid through 54 holes in Dubai.

If form and favorites prevail during Sunday’s final round at the DP World Tour Championship — Rory McIlroy will take the individual title for a record third time and Collin Morikawa will become the first-ever American to win the European Tour’s Race To Dubai.

McIlroy first.  Rory stumbled on the first hole at the start of Saturday’s third round but bounced back and birdied six of the next 12.  McIlroy trailed England’s Sam Horsfield heading to the 18th hole.  Horsfeld was behind McIlroy, who played with Morikawa, and the Englishman was 14-under with the 18th to play.  McIlroy had just bogeyed the 17th, and it was a great bogey (more on that later) and he was 13-under with the par five facing him.

No problem for McIlroy.  Two nice shots and he was on the green and two putts got him to 14-under, tied with Horsfield.  Horsfield’s stray tee shot at the final hole cost him and he’d made a bogey at the par five, a mortal sin when you’re in contention.  It was a two-shot swing.  McIlroy closed with 67, a round that included seven birdies and Rory only birdied two of the four par fives.

“Thought I did well, considering the start (bogey at one),” Rory said after his round.  “Bogey at one — I responded well with birdies at two and three.  I needed birdie at 18 to get into the last group.  I feel like I’m back to playing the way I should.”

That didn’t include his tee ball at the par three 17th, an island hole.  Rory pulled his tee shot, it was headed down the shaved bank and went it reached the flat stones, it hit a hole in one of the stones, bounced out and stopped about a foot away — dry.  After taking a long look, McIlroy played it off the stone slab, got his ball on the green albeit 30 feet from the hole.  He nearly made the putt but the bogey was good considering what might have happened without the great break that kept the ball out of the water.  “Bogey on 17 was a good bogey,” McIlroy acknowledged.

When you compare McIlroy’s resume with Horsfield’s –it’s a mismatch on paper but the individual title will be decided on grass.

It should be a no-brainer for Morikawa to walk away with the Race To Dubai title.  He’s had three straight rounds in the 60s and his 69 on Saturday left him at 11-under, tied for fifth.  He’s way ahead of any of the other top five points leaders.  Morikawa didn’t have anything near his best on day three.  He failed to birdie any of the par five holes.  Three front-nine birdies and nine straight pars on the back added up to 69.

Scotland’s Robert MacIntyre and Swede Alexander Bjork will play in the next-to-last pairing on Sunday.  Both sit at 12-under par.