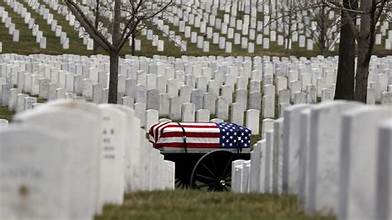 Arlington National shows what The Last Full Measure Of Devotion looks like.

Memorial Day — A Time To Thank Our Greatest Patriots

“For the love of country, they accepted death, and thus resolved all doubts, and made immortal their patriotism and their virtue.”

Those are the words of President James Garfield and they ring just as loud today as they did in another generation.

Today is Memorial Day and it is a day when we need to stop for a moment, forget golf for a second and think about the 1.2 million Americans who have made the ultimate sacrifice so that we can enjoy the freedoms that the world’s greatest country — The United States Of America — provides its citizens.

Those freedoms, as we’ve been told for generations, are not free.  The price has been heavy.  Yet generation after generation has heeded the call, donned the uniforms of the armed forces and written a check that can include one’s life.  Put simply, so very many men and women gave up their todays so that we can have our tomorrows.

My parents were members of our Greatest Generation.  Both served in the U.S. Navy.  My father saw the worst of both — the North Atlantic and South Pacific.  My mother was among the first Navy nurses sent into Pearl Harbor after the December 7 attack.  She tended to our wounded from battles all over the Pacific theatre.

They won that won for us.  There hasn’t been a victory since although there has been war after war, casualty after casualty.

My generation saw too many of our friends and classmates give the ultimate sacrifice in Vietnam.  The American dead totaled 58,200, 40,000 of those were killed between 1967 and 1969.

Today, a new generation will paying the price in the Middle East and Afghanistan where it looks like there may never be a solution to conflicts.

It is all just an ongoing reminder as to the price of freedom.

Soldiers, Sailors and Marines killed in action touch so many lives.  They are sons, daughters, aunts, uncles, children, husbands, wives, best friends and integral parts of their American towns and cities.

It is important to teach the history of war and the price of war.

Sadly, history doesn’t seem that important in our society today.  It’s all about technology and science.

The problem with not learning from history is that with that knowledge, we are condemned to repeat it.

For the record, there’s never been victory in Afghanistan for anyone — not Alexander the Great, Ghengis Khan, the Soviet Union.  Yet there we are.

So between picnics, beach parties, celebrations, rounds of golf, baseball games and what have you, the important thing is that we do not forgot those who have made that ultimate sacrifice.

It is important that we honor them and give thanks for their bravery, courage and determination in battle.

There is no greater love than to lay one’s life down for one’s friends.

Those who have perished fighting for our country, died for people they didn’t know and would never know.  But they knew better than anyone that we as Americans need to stand together.

And today, we should stand together and honor those who gave us — Their Last Full Measure Of Devotion.

Our Loving Father,
God of comfort and unfailing grace,
we pray for those who mourn loved ones today.
Surround them with your peace, strength, and provision.
Lord, protect those who continue to serve our country.
May your faithful promises be their shield.