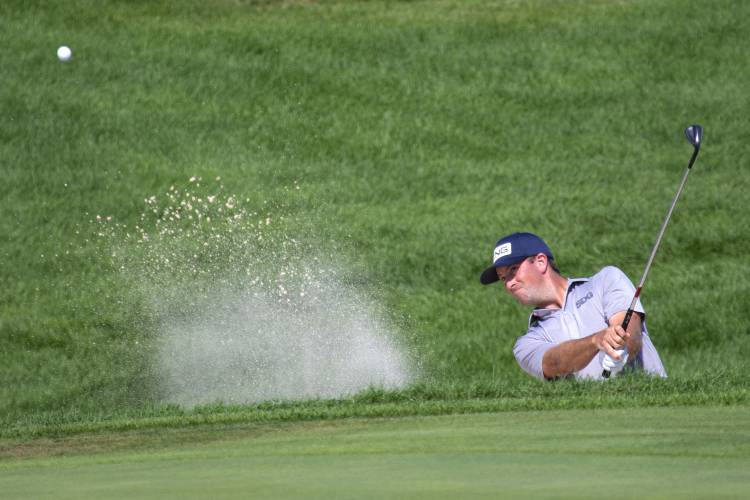 Posted By: Tom Edringtonon: July 29, 2020In: The Lesson TeeNo Comments

But that’s what Michael Thompson faced at the 16th hole during last Sunday’s final round at the 3M Championship.

Take too much sand and birdie is out of the question and Thompson was totally in need of a birdie.  At the time, Adam Long had posted 17-under and that’s where Thompson stood as he lined up that crucial shot.

Thompson pulled it off and it was perhaps the key shot of the final round.  He had 110 feet to the hole, he carried it about 20-25 feet short of the cup, it took one big bounce and checked, leaving him just outside two-feet for the birdie.  He made it went to 18-under and cruised to his second tour win.

Today we’ll take a look at the long bunker shot and we’ll bring in a player with one of the best-ever swings on the PGA Tour — Steve Elkington.

The Elk will show us how to execute the long bunker shot properly.

First, he tells us to imagine that you’re on grass rather than sand.

Second, scoot your body back about a half-inch.

Third, use a wider, more shallow swing and a full follow-through, not the V-shape that is normally used for short bunker shots.

Click on this link to get a primer from Steve.

Also, when you think club selection, leave your sand wedge in the back.  Go to either your pitching wedge or gap wedge.  The late, great Seve Ballesteros would use eight and nine-irons for this shot.  So experiment with it on the range if there’s a practice bunker available.

Gary McCord: Can He Save The Turkey Leftovers Of “The Match III”

Dunhill Championship: Golf With A Side-Order Of Safari

Bradley Hughes Saved Brendon Todd — He Can Help You