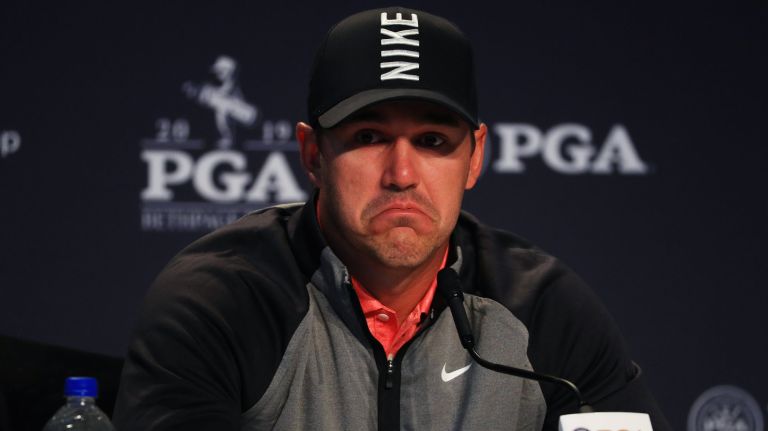 Brooks Koepka has had little to smile about when it comes to his play this season.

Good news is that Brooks Koepka will get to play the weekend in Memphis.

That’s because there’s no 36-hole cut at the WGC-St. Jude.

Wayward drives?  No problem.  Balky putter.  No worries.  Missing greens?  No issue.  No matter how bad it gets, Brooks will get in 72-holes at TPC Southwind.

A year ago Koepka was No. 1 in the world, on his way to a PGA Championship and Player Of The Year.  Today, it looks like that Brooks Koepka was abducted by aliens, and said aliens left a poor substitute.

Want some gruesome stats?  How about 21st in driving distance, 186th in accuracy, 173rd in Greens In Regulation, a lowly 140th in Strokes Gained Putting and a hard-to-fathom 101st in scoring average.

He says his knee isn’t the cause but when you look at the overall picture, well, you wonder.

His restart play has produced one top 10 — a seventh at the RBC Heritage.  Other than that you have a T32 at Colonial, an uninspiring T62 at The Memorial and missed cuts at both the Workday and 3M.

So there are far more questions regarding Brooks as he defends this week at TPC Southwind then again next week in the season’s first major — the PGA at Harding Park.

How bad is that knee, really?  Are we looking at surgery?  He tried that unproven stem-cell therapy.  Nothing.  And his game reflects it.

Brooks still contends the knee is not the problem?  That’s getting harder and harder to believe.

A year ago it was not imaginable that Koepka would fall to these levels of overall poor play.  A slump?  Hard to imagine Brooks Koepka in a slump but these next two weeks will tell us a lot about what’s going on with the world’s No. 6.

The knock on him for the past few years is that he doesn’t get enthused about regular events.  Majors?  Now that’s been a different animal with this guy — he can gobble down a major the way Joey Chestnut attacks hot dogs on the Fourth Of July.

Brooks has tried to tell us he’s “close.”  But missing two cuts in your last three events doesn’t resemble “close” in anyone’s dictionary.  Even his short-game coach, Pete Cowen, who likes to tell-it-like-it is, had this observation:

‘If I was a racehorse trainer, I’d say he had absolutely no chance!  We all know Brooks is the man for raising his game at the big events – and this is going to be his biggest test yet, because he knows he’s not swinging the club well and he’s not happy with his game. But we all know golf, so let’s see if we can help put him back together again.”

Cowen also talked about Koepka’s bum knee.  “When you get an injury as bad as that you’re never 100 per cent right again,” Cowen added.  “But I don’t think it’s a problem. That’s finding excuses for the fact he’s swinging it badly. We don’t need excuses, we need to sort it out.”

Cowen also believes it is more a question of attitude. “When he’s at his best,  he’s bulletproof.  He doesn’t care what other people are doing,  he just puts results on the board,” he said. “he U.S. Open at Shinnecock Hills in 2018 was a classic case in point.  With his caddie Ricky Elliott, I was talking it through with him, how he played every hole in the final round, he was all over the place at times. But he had belief he would win. He had body language that said, “I’m going to get the job done”. That’s what we need to get back.’”

Koepka will play on Thursday and Friday with Patrick Reed and Viktor Hovland.  Reed is 145 spots better than Brooks on the FedEx points list, Hovland (23) is 128 ahead of Koepka, who has just three weeks to try and avoid the total embarrassment of missing the playoffs.

Hard to imagine last year’s Player Of The Year finds himself in dire straits.  But that’s what it is looking like coming into this week’s sweat-fest in Memphis, a place where the humidity is typically the same as the temperature in July and August.

One might think the guy sweating the most this week would be Koepka.

As drastic as it sounds, he’s at an important crossroads for this season and perhaps his career.

Time is running out and Brooks needs to find that game of his which is apparently on vacation somewhere far away.