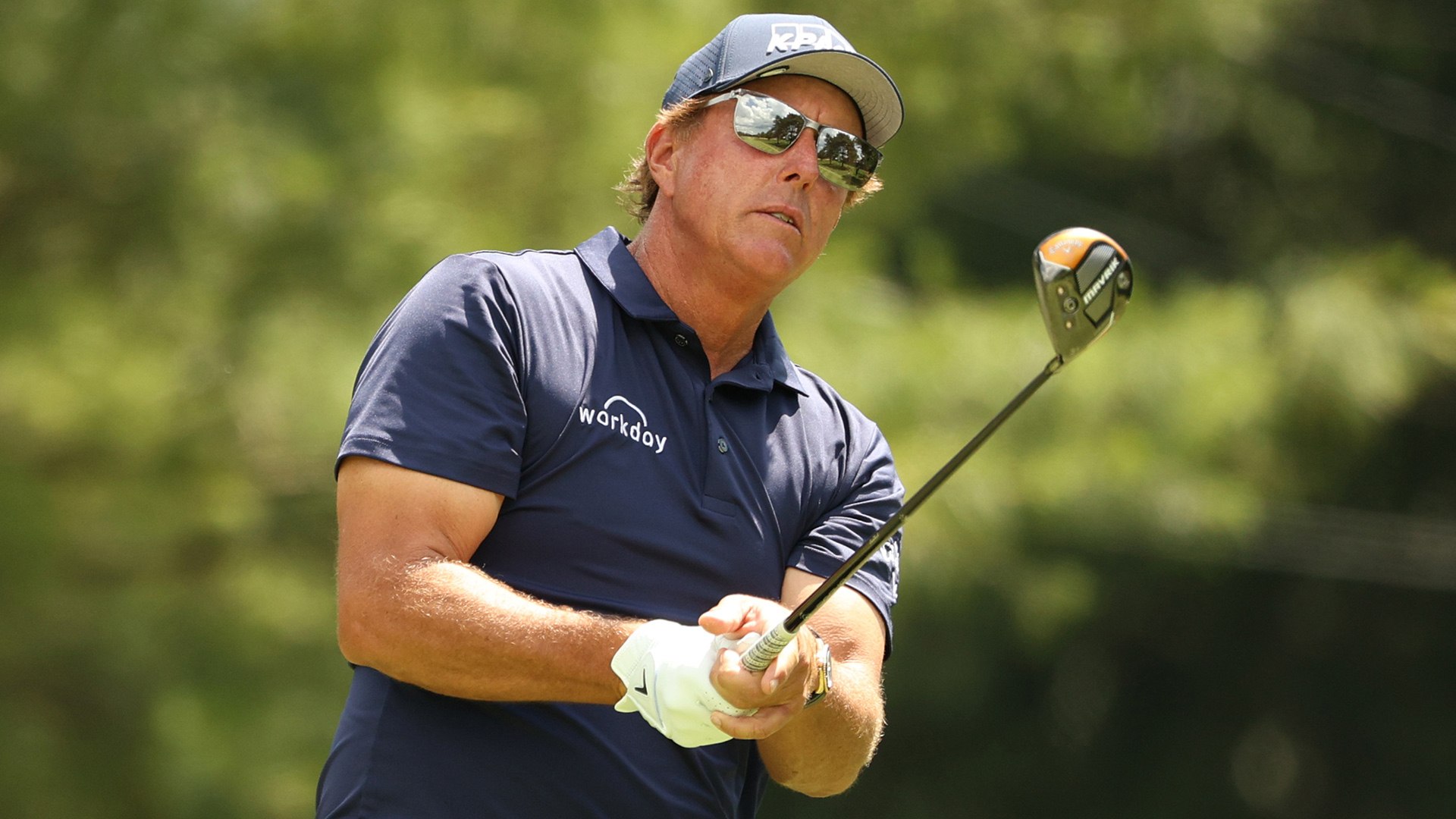 Phil Mickelson kept it in the short grass on his way to a sizzling 64.

It’s been quite a week already for everyone’s favorite 50-year-old lefty and that would be Phil “The Thrill” Mickelson.

Lefty got everyone’s attention earlier this week in Charlotte as he was prepping for this week’s Wells Fargo Championship at Quail Hollow.  Seems Lefty let everyone know that he was “intrigued” by yet another start-up professional golf league — this time it’s something called the Super Golf League.

Rumors were flying that this Super Golf League has money to burn and that it might be willing to throw $100 million at Mickelson to make him the face of said league.

This one is being underwritten by Saudi Golf, which is the cover code for one Crown Prince Mohammad bin Salman, who has enough money at his disposal to get a guy like Lefty “Intrigued.”

We’ve walked this path before.  This league is a separate entity from the Premier Golf League, which has been trying to evolve for a number of years now without much success.  Saudi Golf was supposed to be the money partner there but seems The Crown Prince pulled a little slight of hand, stole the idea and is now passing it off as his own under the Super Golf League moniker.

The Saudi deal wants 10-12 tournaments a year, based in the Middle East and Saudi Arabia in particular while the PGL was supposed to be some sort of team competition.

While Lefty was intrigued, Europe’s biggest name, Rory McIlroy says he’s having none of it.

“Look, they first contacted me back in 2014, so this is seven years down the line and nothing has really changed. Maybe the source of the money’s changed or the people that are in charge have changed, but nothing has happened. No sponsorship deals, no media deals, no players have signed up, no manufacturers have signed up,” Rory said emphatically.  “People can see it for what it is, which is a money grab, which is fine if that’s what you’re playing golf for is to make as much money as possible. Totally fine, then go and do that if that’s what makes you happy,” Rory added.

The Sheriff Of Nottingham (aka Tour commish Jay Monahan) has made it very clear where he and the Tour stand on these upstart leagues, telling his charges:  “It’s them or us.”

So you can figure that Phil’s “intrigue” was basically just a fleeting moment of imagining a $100 million wire transfer into his already obese bank accounts.

So with that “intrigue” behind him, Lefty had more surprises on Thursday during the first round of the Wells Fargo.  Lefty left his “bombs” off the tee somewhere else because he played an incredibly strategic round at Quail Hollow, hitting fairways and greens and making enough birdies to shoot a seven-under par 64 that vaulted him to the first round lead.

Now keep in mind that Lefty hasn’t led a Tour event since the 2019 American Express but that drought ended late Thursday as Lefty handled The Green Mile early, playing the back nine first and made birdies on four of the five tough closing holes to turn in four-under.  A birdie at the first got him to five then two more at seven and eight gave him his best round in a long time on the regular tour.

After all, Lefty couldn’t handle a putt inside nine feet at the 18th last Friday and missed The Valspar cut.

But he painted a different picture on Thursday.

“Obviously it was a lot of fun,” he said after a fun afternoon.  “Big thing for me was stay in the present and focus on every shot,” said Mickelson, who admitted last week he was having trouble with that focus stuff.  Senior moments, you know.  “I really like the golf course, it’s one of the best tee-to-green,” Lefty added.  “You have some really good birdie holes and some tough pars.”

While some might be inclined toward excitement over Lefty’s round, he’s playing it cool.

“I don’t wanna jump ahead — I want to play another fun round tomorrow.”

Editor’s Friday Update:  Phil’s Thursday glory turned into Friday Frustration.  After shooting even par 35 on the front, Phil found himself four-over on the back nine and his 75 was a full 11 shots worse than his opening round.  He made the cut but Bryson DeChambeau was in danger of going home early after rounds of 70-74 left him on the wrong side of the projected even par or one-over cut line.  Jon Rahm had ground to make up after his opening 76, he teed off in the afternoon wave on Friday.