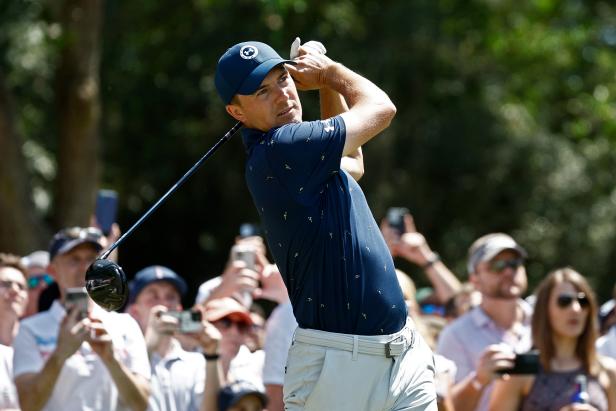 Jordan Spieth came to the idyllic island of Hilton Head more than a bit miffed.

By his own admission Spieth was upset by the missed the cut last week at his favorite tournament — The Masters.  “Last week was a killer for me — not playing the weekend,” Spieth said.

The stats for his putting this season tell a grim tale — 180th on the PGA Tour in Strokes Gained Putting.  Hard to fathom and the immediate reason for his lack of success at Augusta National.

“I came over (to Harbour Town) early and got in extra work,” Spieth explained.

Still, Spieth didn’t look like Jordan Spieth during any of the first three rounds at Harbour Town.  He even missed an 18-inch tap-in on the 18th late Saturday that left him three shots behind 54-hole leader Harold Varner III.

“I was about as upset after the round yesterday as I’ve ever been in a golf tournament,” said Spieth. “There’s just no excuse for those kind of brain-farts as a professional – to myself, but also to Michael (Greller), who is working his butt off – to go out there and do that (when it) could have potentially affected the outcome of a tournament.”

The final 18 was a tale of two nines.  Erik van Rooyen, with his Louie L’ Amour cowboy mustache dominated the early going with five front nine birdies and a single bogey that had him in control going to the back nine.  Sadly, he’d suffer four bogeys coming home.

Spieth got himself in the hunt with a couple of magical Spieth eagles on Harbour Town’s two front nine par fives.

Overnight leader Varner’s playing partner, Lowry, looked more than solid and by time he birdied the 11th, he replaced van Rooyen as the man at 14-under and he was at that number standing on the tee of the tough par three 14th — a hole that caused big problems all week with sand to the left, water right and a nasty pot bunker to the rear.  Lowry kept his tee ball dry but was in that left sandy area.  His pitch came out too hot, rolled past the pin, onto the fringe then over the railroad ties and into the water.  A double-bogey five opened the door for Spieth, Patrick Cantlay, Sepp Straka, Varner, et al.  Shane was still in it, tied for the lead.

Then there was Jordy.

He got to 12 with birdie at 13 then couldn’t find another.  Not until he got to the final hole, where he suffered that Saturday embarrassment.  From 172 yards out, he hit a gem of a second to 10-feet.  Considering he was 60th in Strokes Gained Putting in the field, it was hit-and-miss as to whether he’d make it.  He did and signed for 66 and 13-under.  The 18th took-away then it gave back to Spieth.

A large group of children were begging for his autograph as he headed in.  “I’m going inside to chill now and see what happens — I PROMISE, I’ll be back,” Spieth told them.

Spieth had three guys to watch — Cantlay, Lowry and Varner.  All three were at 12-under.  Cantlay had three holes left, Varner and Lowry had four to play.  Odds were good at least one of them would find another birdie.

Cantlay found his at the par three 17th where he hit a beauty just inside nine feet.  He made it, parred 18 and joined Spieth at 13.  As for Lowry and Varner — they parred in and finished as two frustrated guys.  Varner because he made nine pars without a birdie coming home and Lowry, with that disastrous double at 14.

It was a marquee playoff — Cantlay vs. Spieth — Ryder Cup teammates.

It only took one extra trip up 18 to settle it.  Spieth approach from 204 came up short and found the front bunker.  Cantlay was in control, he had just 179 with nine-iron in hand.  He too came up short but his ball buried.  Bad news for Cantlay, good for Spieth.  Spieth then did what Spieth so often does — he nearly holed his bunker shot, leaving a four-inch tap-in that he gave his full attention.

“No way I could get it close,” Cantlay sighed when recalling what he faced.  His bunker blast left him with 40 feet to tie Spieth and it didn’t happen.

Spieth, who won last year on Easter Sunday at the Texas Open, made it an Easter quinella.

“It felt amazing — I’m a little at a loss for words,” he said after wife Annie gave him the winner’s hug with baby Sammi Spieth in tow.

“Patrick got a bad break,” Spieth said, acknowledging that lady luck did the old reversal at 18 from what transpired on Saturday.

Then someone reminded Spieth that Easter Sunday next year falls on the final round at The Masters.

Top Ten Update:  With his Heritage win, Jordan Spieth has jumped back into the world’s Top 10 — he checks in this week at No. 10.