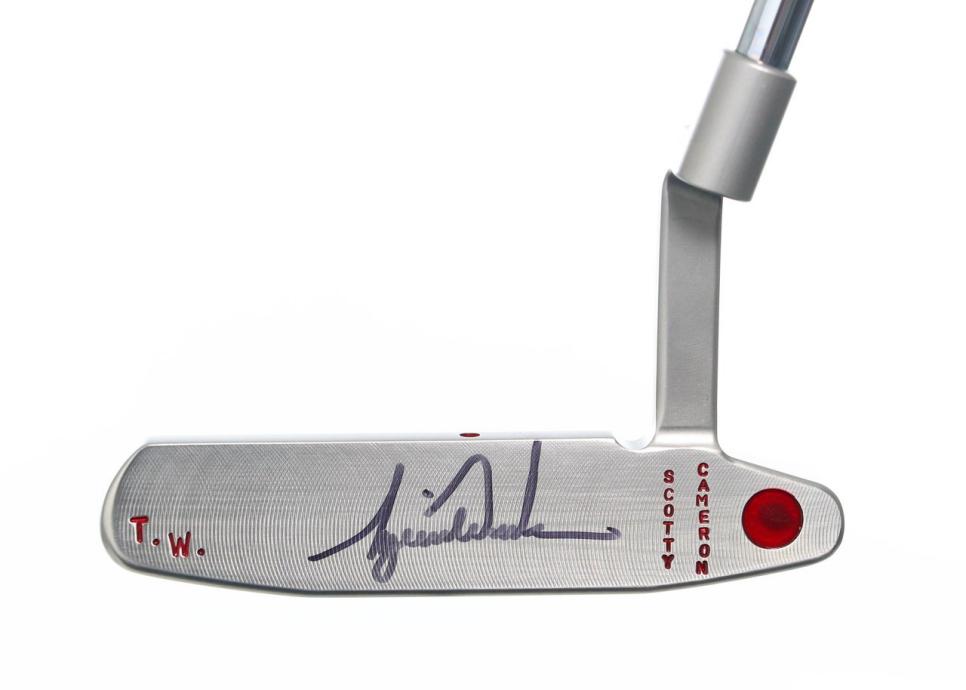 A Tiger Woods-signed putter from Tiger's "back-ups" is up for auction.

Posted By: Tom Edringtonon: September 08, 2022In: In Other News...No Comments

For about the fourth time, another Woods “back-up” Cameron is on the auction block at Golden Age Auctions.

This one may go higher.  The auction closes on September 18th and bidding has already reached $248,922.

This latest Woods back-up was purchased by the owner back in 2005 at a fundraiser for Tiger’s TGR Learning Center in California.  The lucky bidders back then have held on to it ever since — but now have offered it for sale.

Back-up putters owned by Woods aren’t all that rare, Scotty Cameron typically produces at least two for Woods every year.  Tiger does test them and work with them at home to be sure they have the same specs and feel as his tried and true gamer.

So what would Tiger’s “real” putter go for if he ever decided to part ways with it?  That would probably be a silly number.  Given the number of major championships it helped him win, well, the number could be as high as $10 million.

And that will make this one look like a bargain no matter what it goes for.

Can it reach $1 million?

China’s Xiyu Lin grabbed her first-ever lead in an LPGA Tour event Thursday with an eight-under par 64 at the Queen City Championship in Cincinnati.

Lin was tied with Nasa Hataoka at seven-under par when she holed a 15-foot putt from the fringe at the par three eighth hole, her 17th of the day then finished with a par at the ninth for an eight-under par 64 at the Kenwood Country Club.

Hataoka, the ninth-ranked player in the world, was alone in second with a 65.

Craziest scorecard of the day belonged to Paula Creamer, who is making a return to the LPGA Tour.  Creamer shot an even par 72 but it was comprised of seven pars, five bogeys, one double-bogey, a hole-in-one at the par three eighth and an eagle two at the par four fifth.

It looks like a short week for Lexi Thompson.  The American star went without a birdie and finished with a four-over par 76, tied for 132nd.

The course itself was soaked from seven inches of rain that hit the Cincinnati area earlier in the week.

Seems The Lamest Commissioner In All The Land (aka Greg Norman, aka The Great White Fish-Stick) has once again inserted his foot into his mouth.

Seems TLCIATL had his underlings issue this wonderful press release to show how proud they are of the fact that The Defectors can now wear shorts during their exhibition series:

“It’s believed to be the first time an elite professional golf league has allowed shorts to be worn during a round.”

Hmmm, the DLN reaction to more of this LIV “propaganda is:   So they don’t consider the LPGA Tour to be an elite professional golf league??

Bad News For Patrick Reed And His Lawsuit?:

Pretty much everyone has heard by now about sand-swiping Patrick Reed suing Brandel Chamblee and The Golf Channel for “defamation of character.”

A judge was recently chosen to hear Reed’s complaint and the selection may not be good news for Reed.

Judge Alfred H. Bennett will preside and it turns out The Judge is a golfer and is extraordinarily reverent when it comes to ye olde Rules Of Golf.  So much so that it has been reported that that judge carries a copy of the Rules Of Golf in his bag.

Here’s hoping the defense enters the video of Reed moving sand in the bunker during Tiger’s Hero World Challenge and the judge asking Reed for his version of playing the ball as it lies.

This one sounds almost too good to be true!