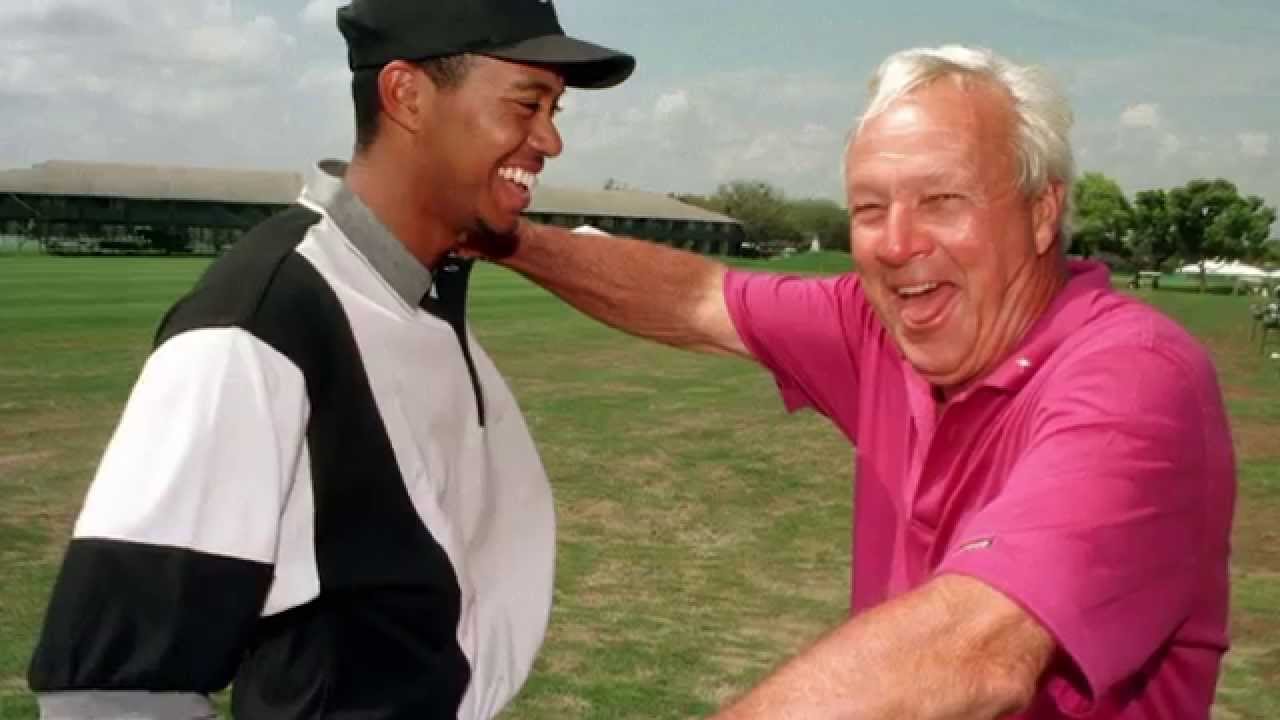 Arnie was still strong and Tiger had a good back -- those were the days.

No Arnie, No Tiger But Bay Hill Still Has What It Takes

Not sure what Arnold Palmer would think about today’s PGA Tour.

If we could share a Rolling Rock, like we did back in 1979 when the PGA Tour first came to Bay Hill, Arnie might mention something about so much money and too many players with too little time to play in many events.

As Arnold grew older, he grew to like a concoction called The Bay Hill Hummer.  It was a mixture of:  mint liquor, brandy, Ketel One vodka (his favorite) and some vanilla haagen-dazs ice cream.

I liked it best when Arnie was a Rolling Rock guy — long time ago.

Arnie’s gone now but his impact on the game remains.  Bay Hill remains, stately and ready for this week.  Should be a good one, the field is well, as Gary Koch once said — Better Than Most.

These days Tiger’s on a pitch-count.  Like an aging baseball hurler, we’re not sure how much is left in the arm, or in Tiger’s case — his back.

There’s still enough quality to get your attention.

Stunning.  But there was still an air of disappointment when he didn’t win two weeks ago in Mexico City.

Rory’s the odds-on favorite this week.  He should be.  Is anyone in the world more consistent right now?

Sure, you’ve Bryson DeChambeau, Tommy Fleetwood, Xander Schauffele and Brooks Koepka.  Anyone remember the last time Brooks Koepka was an after-thought on the PGA Tour?

After 74-74 last week, Brooksie’s got something to prove.  Says his knee is fine.  His scorecard might cast some doubt on that.

Rickie Fowler’s playing — proof that he must be shooting a commercial somewhere in Orlando.

Sungjae Im picked up his first win last week.  No one bothered to ask him the most important question of all:

“Hey Sungjae, have you heard from the South Korean Army yet?”  You see, all men in his country must serve in the military.  Even those BTS boy-group kids couldn’t land an exemption.  Just a matter of time before the tour’s 2019 Rookie Of The Year is in uniform.

Patrick Reed’s in the house.  Would love to have a one-on-one with Arnie, away from the mass media, over a Rolling Rock and ask him about that sand-sweeping down in the Bahamas.  Can tell you it wouldn’t have sat well with Arnold.

More good news is that NBC is doing the television this week.

Paul Azinger’s back and yes, there are European players in the field, including Tommy Fleetwood.

Yeah, there are a lot of questions to answer this week at Bay Hill.

Good field with No. 1 on hand.

Rory needs to win this one.