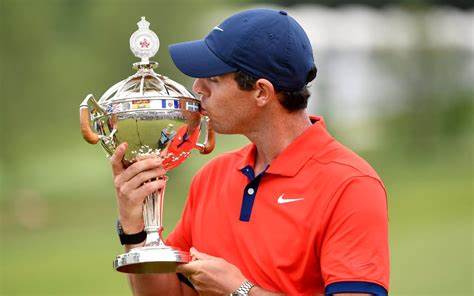 Rory McIlroy won the Canadian Open in 2019 -- the event is finally back!

Canada — the most COVID-fearing country in North America is finally back and so is the Canadian Open — a tournament won by Rory McIlroy three years ago.

Rory finally gets his chance to defend that title this week at St. George’s Country Club outside Toronto.  Yes, finally.  There hasn’t been a Canadian Open for the past two years as the country was shut down longer than most due to the pandemic.

Finally things are starting to get back to normal in the Great North and McIlroy heads a pretty decent field this week considering that next week is the U.S. Open.

PGA champion Justin Thomas is in the field.  So is world’s No. 1 Scottie Scheffler, who lost the playoff at Colonial two weeks ago to Sam Burns.

Cam Smith, Shane Lowry are there.  So is Patrick Reed and Tony Finau.

What they’ll see at St. George’s is a different course from the one that last hosted this event in 2010.  The bunkers and greens complexes have been rebuilt.  This will be the sixth time that St. George’s has hosted the Canadian Open.

Brooks Koepka hasn’t been a factor on the PGA Tour this year but he was the star last weekend in the Turks and Caicos along with the new Mrs. Koepka — Jena Sims.

The two were hitched in an elaborate weekend of partying and celebration.

Maybe, at some point, Brooks will get back into golf again.

Phil Mickelson is a lifetime member of the PGA Tour, as is anyone with 20 or more victories (Dustin Johnson).  Mickelson has not resigned his membership nor has D.J.

Mickelson says he still plans on playing in the majors.  His PGA win in 2020 earned him a five-year exemption into the U.S. Open, the Open Championship and the PGA.  As a Masters champion, he can play until he no longer wants to play.

You can also add Dustin Johnson’s name to the list of those who have resigned their PGA Tour membership.  Like Lefty, he WAS a lifetime member of the PGA Tour.  Now he’s not as D.J. mumbled and stumbled his way through an LIV press conference on Tuesday in his usual monotone.

That being said, the other governing bodies — the USGA and the R&A along with the PGA of America, which runs the PGA and the Ryder Cup, may have to react if Mickelson and others are declared to not be in good standing with the PGA Tour.  But that’s a story for if and when that occurs.

The LIV Series has proven that you can buy Phil Mickelson, Dustin Johnson, Sergio Garcia and a few others who are on the downside of their careers.

Reports have it that something in the “high nine figures” was thrown at Woods to join the LIV Series.  Could it have been $700 million?  Maybe $800 million?  Only The Great Stiney (aka Tiger’s manager Mark Steinberg) knows for sure.