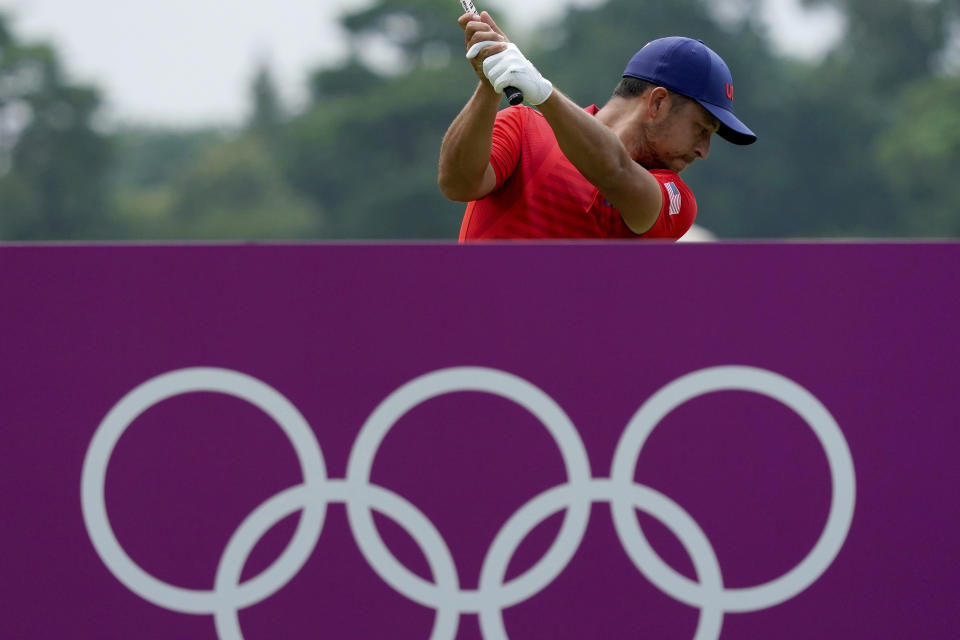 Sepp Straka shot 63 on Thurday, on Friday it was Xander Schauffele's turn and he's in the lead at 11-under par.

Brace yourselves Olympic Golf fans, this week’s Gold Rush at the ultra-lush Kasumigaseki Country Club looks like it’s going to be like one of those PGA Tour events where birdies rule and bogeys, well, they’re best avoided at all costs.

Things got off and running late Wednesday night into early Thursday morning here in the good old US of A with a first-round that featured players making putts from  as far away as the Olympic swimming venue in downtown Tokyo — or so it seemed.

Before we get into the birdie-fest, it’s important to know that the host nation went to great lengths to make sure not a blade of grass was bending in the wrong direction at Kasumigaseki — there’s been no play for the club’s members since May.  In turn, those greens make pool table surfaces look bumpy.

Right from the outset, putts were falling like rain in Seattle.  “I don’t know if I’ve seen anything like it,” declared former Ryder Cup captain Paul Azinger who is NBC’s lead analyst for this competition.

The first group out was set a high bar: Sepp Straka, who lives in Valdosta, Ga., is playing for Austria, homeland of his father.  He had a perfect, bogey-free card and signed for 63, tying the low rounds from the Rio Olympics in 2016.  We’ve seen 63s from him three times on the PGA Tour but he’s never sustained it long enough to win.  No doubt the Austrians are excited at the prospect of Sepp somehow keeping this up and winning gold — they’ve only got three medals in the latest count — one of each (gold, silver, bronze).

He called it “a dream” just to be there.  He didn’t realize he tied the record (63):  “I didn’t know that, it’s special.  The greens are so good if you can give yourself some putts (at birdie).”

Playing partner Thomas Pieters from Belgium was ho-humming his way along until he holed out his approach at the par four 11th for eagle (two) then went on to shoot 30 coming home and 65.

Adding to the “small name” leaderboard was “Jazz” Janewattanand from the European Tour, son of a judge in Thailand who loves jazz music and so nicknamed his son.  Jazz made a bunch of putts (surprise) and was a shot behind Sepp with a seven-under par 64.  Carlos Ortiz joined Pieters with 65.

Perhaps a harbinger of weather to come happened during day one when lightning pulled the players off the course for two hours.  By time they went back, it was even more gettable.  Jhonnie Vegas, Joachim Hansen and Juvic Pagunsan shot 66s.

The only thing missing at the top were our high-profile Americans.  Best of the bunch were Patrick Reed and Xander Schauffele.  Reed got in late, didn’t even have the benefit of a practice round yet he managed to shoot 68 along with Schauffele.  Gold medal favorite Collin Morikawa was an underachiever with 69 and poor Justin Thomas found himself without a single birdie.  J.T.’s crappy putting is still haunting him and the result was 18 straight pars.  All 71 got you in this putting contest was a tie for 41st in a 60-man field.

Hideki Matsuyama is the apple of Japan’s golfing eye but Hideki-san was showing some of the rust that developed over the past few weeks.  This was his first competitive round since the first round of the Rocket Mortgage.  He tested positive for COVID in Detroit and was a scratch from the Open Championship and the 3M.  “It was very difficult,” he said after shooting 69.  “Probably toward the end a little bit of a mental slide and focus kind of faded away from me.”  Hideki hopes he can “embrace the pressure” of his homeland’s expectations for nothing short of gold.

Truth be known, par on the first day was probably 68.  Don’t be surprised if someone shoots 62 or lower during this competition.

For the faction trying to equate the Olympics with a major championship, that simply a stretch at best.

Second Round:  Xander’s Turn To Shoot 63:

Friday’s conditions were a carbon-copy of Thursday.  The course was even softer thanks to an inch of overnight rain but there was one big difference — the pins were tucked.

That didn’t stop the X-man, Xander Schauffele.  It was Schauffele’s turn to put a 63 on the board and combined with his opening 68, he stood atop the leaderboard at 11-under par heading into the weekend.

Young Carlos Ortiz from Mexico added a 67 to his first round 65 and is a shot back of the USA leader at 10-under.

Matsuyama turned it up on day two.  The Japanese golf idol was six-under for his round through 16 holes when they ran out of daylight, thanks to yet another weather delay that lasted 90 minutes.  Hideki was at eight-under with two to play while Italy’s Mito Perrira (69-65), Sweden’s Alex Noren (67-67) and day one leader Sepp Straka (63-61) all finished at eight-under.

It was Schauffele’s finish that got him into the lead — he played the last five holes in five-under, going eagle-par-birdie-birdie-birdie.

Perhaps a good night’s sleep made a big difference for Xander.  The air conditioning in his hotel was out Wednesday night, causing tough sleeping conditions.  But it was restored and he came back well rested for day two and it showed in his performance.

Schauffele was confident in his mindset:   “The work is done even before you show up to the tournament. If you’re sitting around after a round trying to think-tank it and figure out what you’re doing wrong,” Schauffele said, “you’re doing it wrong.  There’s a very small group of people that have won from too far behind,” he added. “If you’re trying to win golf tournaments, you need to be in the hunt.”

Once again, there were birdies and eagles to be had and Xander got his share.  With the tee box moved up, the par four sixth played 294 yards and Xander launched a high three-metal that finished just eight feet from the hole.  He rolled in the putt for an eagle to jump start his round.

“It was nice to capitalize on a good tee shot,” he said.

There’s a long way to go in this one before medals will be won and Schauffele knows it.  He’s been reading a lot of self-help and mental strategy-related books.

“It all brings me back to a simple conclusion, which is something that was preached to me at a young age,” Schauffele explained — “stay patient in tough times.”

There wasn’t anything tough about scoring conditions the first two days and it has shown.

Schauffele is the only American near the top.  Collin Morikawa (68-70) and Patrick Reed (68-71) were seven shots back of Schauffele while Justin Thomas is only one-under for the tournament through 17 holes.  J.T. will have to be extraordinary over the weekend to make it to the medal stand.

In the meantime, it looks like they’ll blow past the 16-under mark that won Gold in Rio.

How low will they go?