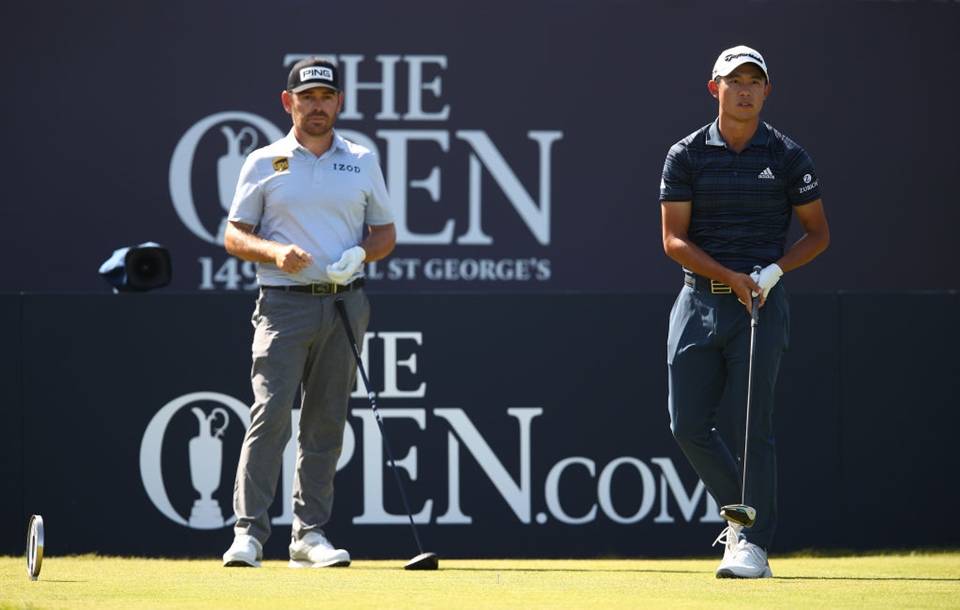 Louie Oosthuizen and Collin Morikawa will play in the final twosome on Sunday.

It’s been 11 years since Louie Oosthuizen won the Claret Jug at St. Andrews.  The 38-year-old South African gets a shot at it again going into Sunday’s finale at the 149th Open Championship.

Oosthuizen was unspectacular but steady on Saturday, hitting enough good shots to get to 12-under par thanks to a 69.  His 198 total for 54-holes is the second lowest three-round score in Open history.

Standing between Oosthuizen and a second Claret Jug is a major champion and an extraordinary striker of the golf ball — Collin Morikawa, the 2020 PGA champion and fourth-ranked player in the world.

Morikawa survived a pair of bogeys to start his day and after he was two-over through his first five holes, he played well enough the rest of the way to shoot 68 and put himself within a shot of Oosthuizen.  The two will be paired again Sunday in the final twosome of the day.

It looked like there would be a third player coming in at 11-under par under Jordan Spieth shot himself in the foot over the final two holes.

Spieth looked like the strongest player in the field through 10 holes, he was four-under for his round and 12-under.  A bogey at the 11th dropped him back to 11-under and after five straight pars, hit a perfect drive at the 17th that left him a stone’s throw from the green.  Spieth tried to hit a low run-up shot but it didn’t make it past the top of the false front and left himself well short of the green.  He chose to putt, going seven feet by then missed the par attempt.

At 18, Spieth once again was in good position.  He hit the fairway then his approach finished 25 feet from the cup.  His first putt left him just two feet and the shock of the day came when he lipped out the par putt.  The bogey-bogey disaster for Spieth dropped him back to nine-under.  He lost his chance to go head-to-head with Oosthuizen in that final pairing.  Instead, the spot belongs to Morikawa.

Odds favor that one of the top three will capture the Claret Jug on Sunday, but if not, Scottie Scheffler and Corey Conners are in at eight-under par.  Scheffler’s 69 came from a closing birdie.  Scheffler is long on talent but short on major championship experience.  He’s never won on the PGA Tour.

Conners had the best round of the top five players — a four-under par 66.

U.S. Open champion Jon Rahm’s 68 put him five shots back of the leader.  He could have been closer had it not been for three bogeys, the first coming at the opening hole.  Rahm acknowledged that he’ll have to do “something special” on Sunday to have a chance.

The course played tougher on day three and Oosthuizen talked about the pin positions after his round.  “Some really questionable pins out there,” was Louie’s take.  “I made some bad swings (on closing holes) but I righted the ship out there.”  Oosthuizen also acknowledged his mindset for the final 18:  “When the round starts tomorrow, it’s all shot-by-shot.”

Morikawa’s start was rough but he overcame it.  “I think I got into a rhythm — I kept my head in it and thankfully made a few birdies.”  As far as his game plan for Sunday?  “I’m just gonna stick to my routine.”

Spieth didn’t have anything to say after the embarrassing missed two-footer.  He went straight to the putting green to try and work things out.