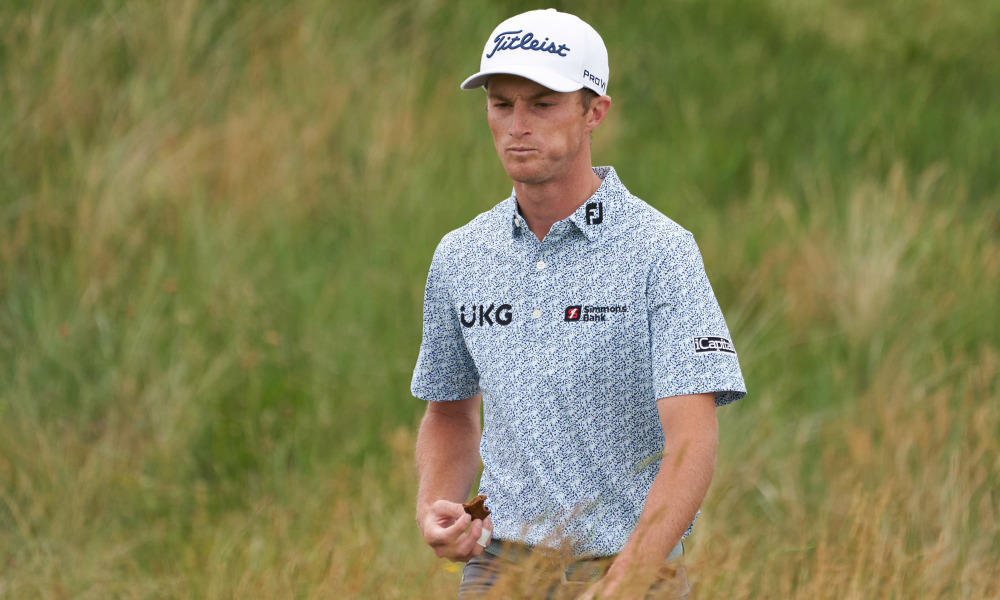 Will Zalatoris hurt his back on Thursday when he found the deep rough on the 15th hole.

You can lose small children in the deep stuff at Royal St. George’s site of the 149th Open Championship and that high stuff knocked Will Zalatoris out of the competition after Thursday’s first round.

Zalatoris,  shot a one-under par 69 on Thursday but on Friday, said that he injured himself while trying to hack out of the high stuff to the right of the 15th fairway.  After using all of his strength to advance his ball, Zalatoris appeared to bend over in discomfort.  On Friday, he recounted that the shot sent a “tingling” sensation down his leg and that he’d been advised to not risk further injury to his back.

Zalatoris said he initially thought about pulling out of the event immediately afterward, but that he didn’t want to spoil his Open debut.  After the hack-out on the 15th hole, he bounced back with a birdie on the next but bogeyed the last two – including a missed putt from one-foot at the 17th hole.

“Considering this is my first Open,” he wrote, “I felt like I needed to finish the round (even if it meant embarrassing myself a little at the end ha!).”

Zalatoris said that he attempted to hit balls and work out Friday morning but showed little improvement, adding that he was “gutted” to not continue in the year’s final major. He said he looked forward to returning to competition “as soon as I can.”

Up to 30th in the world, Zalatoris has enjoyed a strong run of form in the majors, finishing runner-up at the Masters and tying for eighth at the PGA Championship. He also shared sixth place at the 2020 U.S. Open.

Cobra Rep Fires Back At Bryson After DeChambeau Badmouths His Driver:

After his opening round on Thursday, Bryson DeChambeau declared that his driver “sucks.”

Then came the blow-back — first on social media and then from Cobra’s Tour operations manager — Ben Schomin.

Schomin, who had coincidentally been the fill-in caddie for DeChambeau two weeks earlier in Detroit was pissed off by DeChambeau.

“Everybody is bending over backwards. We’ve got multiple guys in R&D who are CAD’ing (computer-aided design) this and CAD-ing that, trying to get this and that into the pipeline faster. (Bryson) knows it,” Schomin said. “It’s just really, really painful when he says something that stupid.  He has never really been happy, ever.  Like, it’s very rare where he’s happy.  Now he’s in a place where he’s swinging a five-degree driver with 200 miles per hour of ball speed.  Everybody is looking for a magic bullet.  Well, the magic bullet becomes harder and harder to find the faster you swing and the lower your loft gets.

“It’s like an 8-year-old that gets mad at you. They might fly off the handle and say, ‘I hate you.’ But then you go. ‘Whoa, no you don’t.’ Schomin continued.  “We know as adults that they really don’t mean that and I know that if I got him cornered right now and said, ‘What the hell did you say that for?’ he would say that he was mad.  He didn’t really mean to say it that harshly.  He knows how much everyone bends over backwards for him, but it’s still not cool.”

“The comment I made in my post-round interview today was very unprofessional,” DeChambeau said. “My frustration and emotions over the way I drove the ball today boiled over. I sucked today, not my equipment. Cobra and I have worked together for over five years and they are some of the hardest working people in (the) golf industry and make an incredible product.

“Their team is like family to me, especially Ben Schomin who has been there for me every step of the way since I started my career. I deeply regret the words I used earlier.  I am relentless in pursuit of improvement and perfection. Part of that causes me to become outwardly frustrated at times. With the new speeds I am obtaining, my game is a constant work in progress and so is controlling my emotions.”

Of course Brooks Koepka took advantage of the situation and managed to troll DeChambeau once again.  On Friday, after his 66, Koepka blurted:  “I love my driver!”