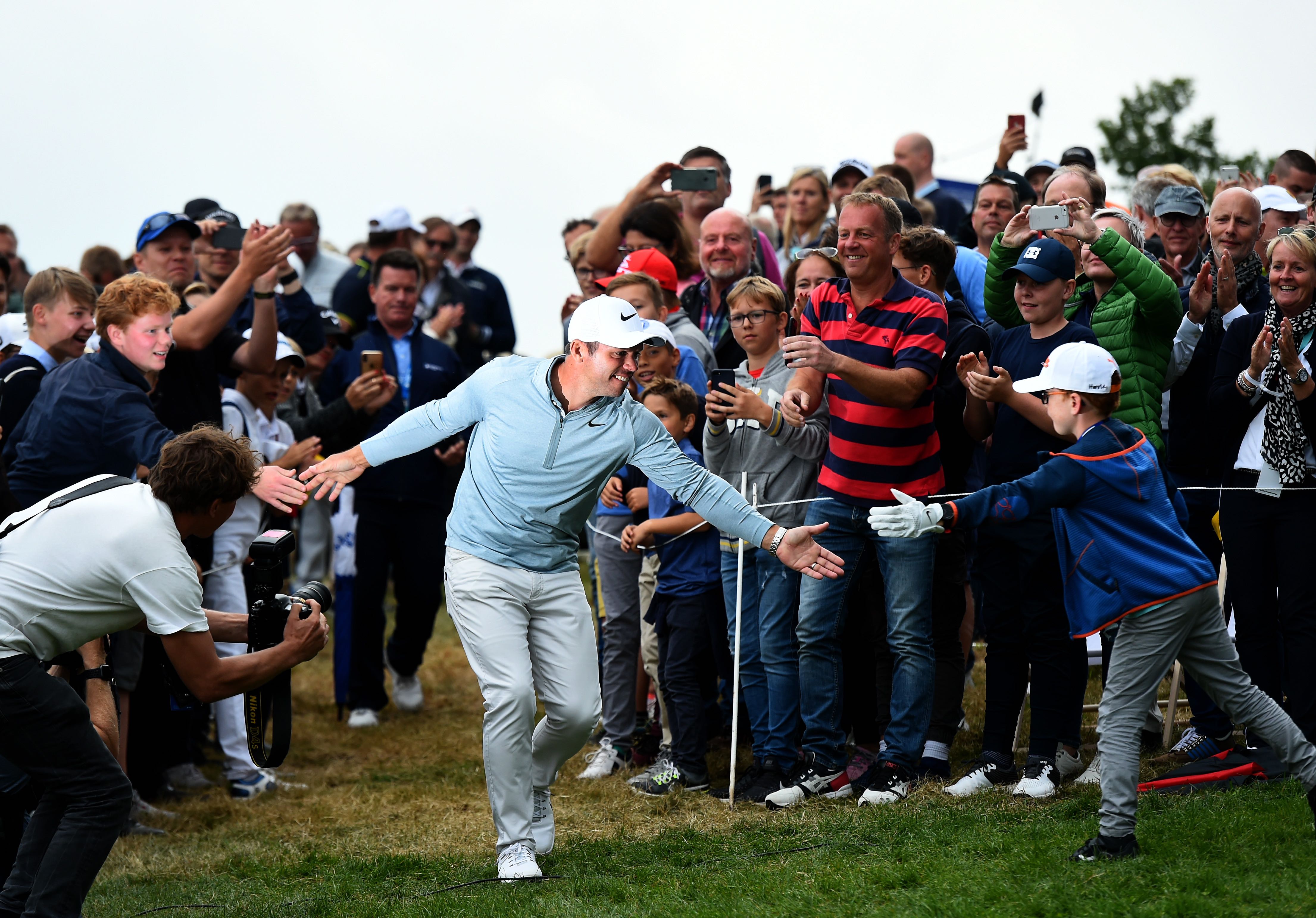 Paul Casey celebrates with a young spectator at the Porsche Open.

Paul Casey Had The Most Sunday Horsepower At Porsche Open

American hot-shots Patrick Reed and Xander Schauffele were way, way down the scoreboard and USA tightwad  Kooch The Caddie Mooch (aka Matt Kuchar),  was sent packing Friday after he missed the cut.

But Paul Casey has been on a run, he’s had his best season as a professional at age 42 and it seemed a pretty good proposition that he’d overtake those guys in front of him and win the Porsche Open.

By day’s end, that’s exactly what Casey did.  He had the most horsepower on what turned out to be a pretty tough course at the Green Eagle complex.

The one thing that has held Casey back over the course of his career has been the putter but down the stretch, he came up with birdies at the 16th and 17th holes to shoot a sparkling 66 and post a sweet 14-under total.

Both McIntrye, a baby-face 23-year-old from Scotland and Ritthammer, the German, had chances to catch or tie Casey.  But neither were up to the task and Casey notched his 14th European Tour victory, his first in five years.

“It’s been a long time,” said Casey, who finished fifth at the Tour Championship and pocked a tidy $2.5 million for that.  “This year has been fantastic — I’m over the moon!”

Casey has consistently been one of golf’s best strikers of the ball and once again, that was the case all week in Hamburg.  “My ball striking was excellent, those were big putts at 16 and 17,” he pointed out.

The English star came into the tournament ranked 17th in the world and he’ll move up from that.

He got himself a win on the PGA Tour this past season.  He won the Valspar at Innisbrook, going back-to-back in that Florida event.  His PGA Tour wins stand at a pedestrian three but overall, he’s got 20 world-wide wins on his resume.

“At 42, it’s nice to be at the top of your game,” Casey said, all smiles after ending that European Tour victory drought.

“I’m a bit emotional, but I always get emotional after a win,” he said.  No worries there, who wouldn’t?

At this stage of his career, Casey has learned to take it all in.  “I’m enjoying my golf.  I’ve got a good understanding of my game.”

And that is where everyone out there would like to be.

Casey now turns his attention to one of the European Tour’s flagship events — the BMW PGA at Wentworth — just outside London.  It will be a home-game for Casey who is now 16th in the Race To Dubai and looking to move higher over the next two months.

It will draw a quality field with all the name players from Europe and the usual appearance-fee hungry Americans  (yeah, we’re talking about you, Kooch).

His game’s in good order, the putter is working and life is good for Paul Casey.