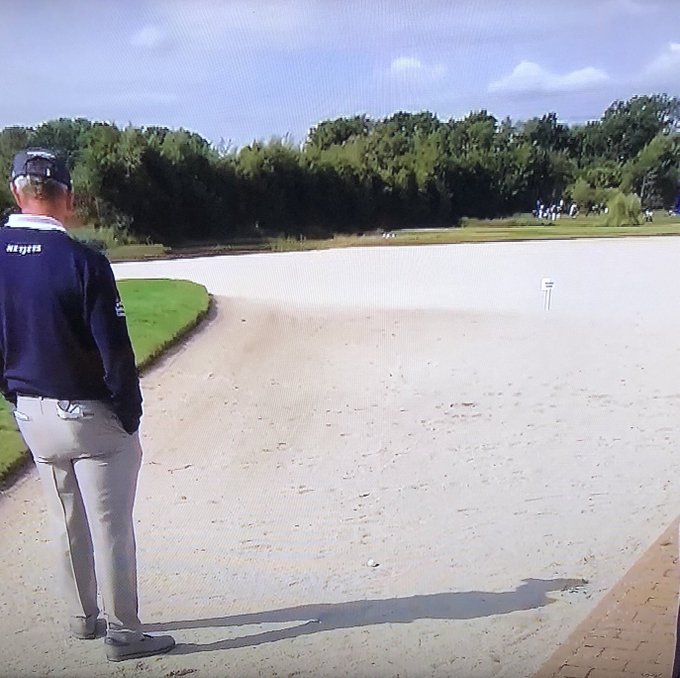 Kooch drew a bad waste area lie but decided to do something about it.

We know that Kooch The Caddie Mooch (aka Matt Kuchar) is the tour’s notorious tightwad.

We didn’t know that given the chance, he just might bend the rules a bit.

Late Friday toward the end of his second round,  Kooch The Caddie Mooch  was dangling near the cut-line at the Porsche European Open.

He found himself with a partially sunken lie in a waste area, consulted with an obviously inexperienced European Tour official then proceeded to legally move a few stones, totally okay thanks to the new rules.  Ah, but then Kooch The Caddie Mooch  evidently decided that pieces of sand were finely-ground stones and started flicking sand away from his ball.

The lads on the television announcing crew were having a fit.  They were watching as it transpired and sounded quite appalled by Kuchar’s liberal removal of sand, joking that Kuchar would soon have a perfect lie.

“Well, he’s going to have a perfect lie in a minute,” one commentator said.  “He’s doing it very quickly, isn’t he? Because he’s been told he can remove the bigger bits, but what he’s doing is moving everything.”

Under the 2019 Rules of Golf changes, players are allowed to remove “loose impediments” in the “general area,” which was formerly known as the area “through the green.”

Kooch The Caddie Mooch  went from a fairly test lie to a pretty decent one.

After the fact, John Parramore, head rules official for the European tour, showed up and had a chat with Kuchar.

As it turned out, justice was served.  Kooch The Caddie Mooch  shot 74-74, missed the 36-hole cut and was sent packing, pocketing what was probably a decent appearance fee.

So now, not only is he a tightwad, he’s a rules bender.

Folks will be keeping a closer eye on Kuchar from now on — bet on that.