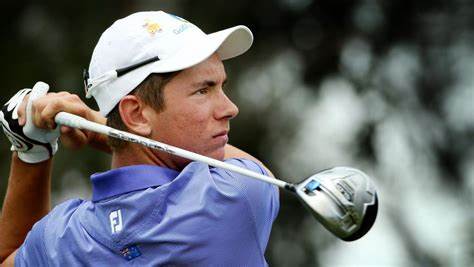 After he walked off the 54th hole late Saturday at the Bermuda Championship — Taylor Pendrith was living the Bermuda dream.

The PGA Tour rookie from Canada had played his way to the top of the scoreboard (17-under) with a cozy three-shot lead.  Didn’t matter that last week’s event was one of the worst overall fields in recent Tour history — Pendrith was 18 holes away from securing his card for the next two years and getting himself in the catbird seat for major championship invites and a FedEx Cup jumpstart.

That’s hefty stuff for a guy who just graduated from the Korn Ferry Tour.  The opportunities were overwhelming.

Maybe too overwhelming as Pendrith dissolved quickly over the first nine holes on a rainy, windy day.  They even went off early Sunday morning to avoid even worse weather predicted for the late afternoon.  Bogeys at six, seven and eight put the kabosh on his ambitions and opened the door for whomever might be ready and able to step through it.

Patrick Reed was the most accomplished player in the field and he made his presence known on Sunday.  He zipped his way around the Port Royal Golf Club with a nifty 65 that put him in safely at 14-under par.  It gave the rest notice as to what it was going to take to win and that was 15-under par.

Danny Lee made the turn in one-under to get to 15-under.  An even par back nine would revive his Tour card.  Lee crumbled mentally with a double-bogey, bogey, bogey run that started at the 12th.

Herbert started the day four back of Pendrith.  It wasn’t a spectacular round by any means but all he needed was a two-under par 69 and that’s what he got.  He clinched it with four straight pars to close, not what you’d imagine to be a special finish.  Lee still had a chance to shoot 15-under but a poor drive and a second that missed the 18th green ended his hopes.  Herbert, on the other hand stuck his approach to seven feet for birdie.  In the end, he didn’t need that birdie putt and missed it.  Still, the win was his and the two-year Tour exemption.

Herbert already played his way onto the Tour at Korn Ferry Tour finals earlier this year.  The win puts him back inside the top 50 of the Official World Golf Ranking and he can count on a Masters invite this April.

“I felt like I grinded really well early and I had the right attitude going into the day that it wasn’t going to be easy,” Herbert said afterward. “You just knew it was going to be one of those days where you had to battle really, really hard. Under par was going to be a great score.”

As for Lee, the tie for second with Reed put him in better standing that he was at the beginning of the week.   The T2 was good enough to secure his card after starting this season playing on a medical exemption.  Lee a solo third-place finish to earn enough FedEx Cup points to keep his Tour membership.