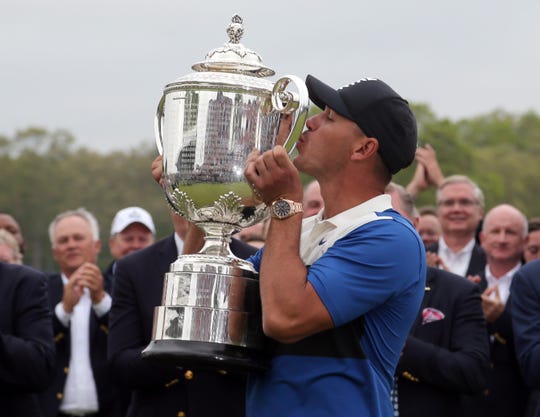 There may be no PGA Championship for Brooks Koepka to defend in May.

Sports have long been our escape from the nuances of work and everyday life.

Sports have long been this country’s go-to getaway, most of it on television.  We watch, we imagine, we pull for our favorites, we relish the experience.

For those of us who have loved the game of golf for more than five decades, the PGA Tour, the major championships and everything related has defined the seasons of our lives.

The Masters and its beautiful setting has long stood as the harbinger of spring, the birth of a new golf season — plans, trips and the dream of birdies yet to come.

Now the fears from the coronavirus pandemic have squashed our annual rite of spring.   This has long been my favorite major.  It was the first major I covered as a young golf writer in the old Tampa Tribune days.  The setting is the most beautiful, genteel and dignified.  Simply spectacular.  It is the only major held at the same place every year.  You get to know each hole by heart, you know each hole where golf history has been written.

And just like that, the 74-year run of the Masters has ended.

Which brings us to the season’s second major championship — the PGA at Harding Park in San Francisco.  It is set to be played in just 59 short days — which begs this question:

Will they actually be ready to go in that short a time frame?

If you listen to the noise out there, this is supposed to get worse before it gets better.  It has taken down all our major sports.  So the logical question  is:

Can this mess be resolved in time for the season’s second major to be staged?

First, it’s in California and odds are good that place won’t allow more than 200 people to gather anywhere in the state’s confines for well past the next 60 days.

Is it logistically possible to move the PGA to a low pandemic-infested area?  Probably not.

Right now the world of sports in our country has been sucked into an ugly black hole.

Spring has always been the best — March Madness, The Masters and the opening of Major League Baseball.

All gone for now.

At this point, it’s tough to guess when sanity might be restored.

A lady in my neighborhood was totally bummed.  She’s a huge Rory McIlroy fan and was convinced that this was Rory’s year to win 2020 Masters and complete the career Grand Slam.

But no, that favorite rite of spring won’t happen.

In fact, nothing is happening right now.

Tour players are on hiatus.  As of now, next up, yet to be called off is the RBC Heritage, the event at Hilton Head Island that comes the week after The Masters.

May be just a matter of time before that’s called off.

Then all eyes turn to the PGA.

But don’t count on it.