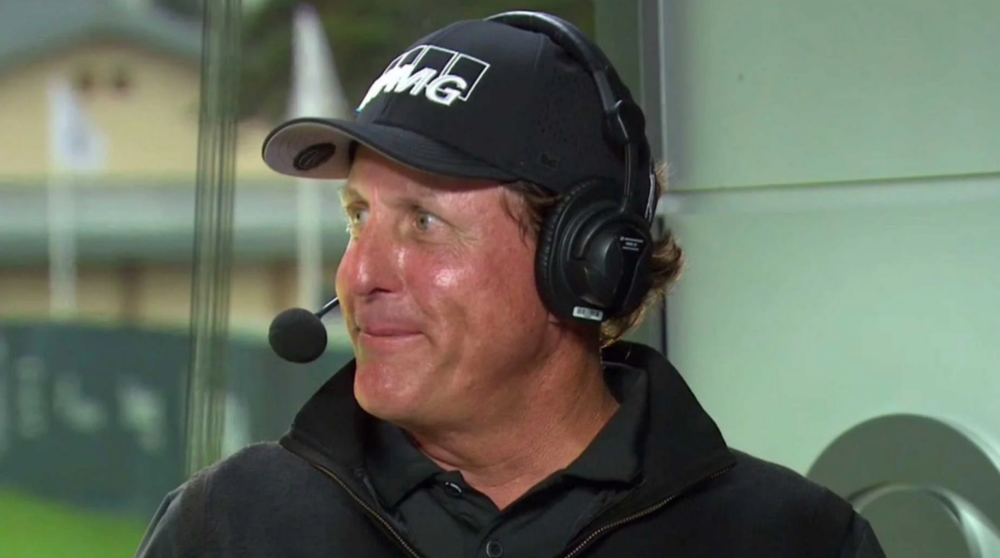 Phil totally took over the CBS booth when he made an appearance.

CBS has been trying to freshen up its golf broadcasts — Phil Mickelson took care of that single-handed during last Saturday’s third round at the PGA Championship.

Mickelson has gotten rave reviews after he put on the head-set and basically overpowered analyst Nick Faldo.  He brought a level of insight that probably left CBS wondering when Lefty might consider putting the clubs in his garage.

CBS had approached Mickelson earlier in the week and after barely making the cut and playing early on Saturday, Mickelson fit right into the broadcast times.

Lefty didn’t waste any time getting after it:

But after that awkward beginning, Mickelson added a players’ perspective that even Faldo — a six-time major champion who hasn’t played regularly on tour in almost 20 years — couldn’t.

Phil had some good observations on 36-hole leader Haotong Li, having met Li in China when Li was 14 years-old.

Li, Mickelson said, was one of the funniest guys on the tour. Matthew Wolff in his tie-dye shirt “just looks cool to me, all-around cool,” Mickelson said, before getting into a technical breakdown of the 2019 NCAA champion’s swing.

Mickelson also shared some insight on playing events without fans. The PGA Championship, which was rescheduled from May, was the first major since the COVID-19 pandemic shut everything down, including sports.

“We all miss it, we miss the electricity. That’s a big part of the fun of it,” Mickelson pointed out.  “Some players like to feed off the energy in the crowd to help them, I certainly do.”

Mickelson also gave the back-story on why he now wears those mirror sunglasses on the course.

“There’s actually a story to that. Back during Covid break, I did this Carac cream, which is like a skin cancer chemotherapy treatment on your face for like two weeks. Your skin blotches up, and you kill these cancer cells that you can’t see, and when I went outside, I had to wear some protection, so I wore these glasses to kind of protect the area around my eyes.  I liked it. They didn’t move around on my face when I was swinging, I went out and played with them, and I thought, ‘Oh, I’ll give it a try.’ So that’s kind of where it started. And then my eyes were much more relaxed at the end of the day; they weren’t squinting the whole time.”

Mickelson’s appearance was a huge breath of fresh air, something CBS has been lacking and hoped to find it by getting rid of Peter Kostis and Gary McCord, which hasn’t proven to be a great move.

Best move?  Get Lefty in there if and when he decides it’s time.

The Wyndham Championship may as well be called “The Bubble Open.”  Reason?  This is the last call to qualify for the FedEx Cup playoffs that begin next week in Boston at the Northern Trust.

The tournament, held at Sedgefield Country Club in Greensboro and is the last chance for players outside the top 125 to make it into the playoffs.

The playoffs this year have been cut from four events to three.  There will be just two chances for players to work their way into the top 30 and earn a spot at the Tour Championship at East Lake.

Some big names are pretty far down the points list.  Rickie Fowler is 83rd, Tommy Fleetwood 85, Brooks Koepka 92, Jordan Spieth 94 and Justin Rose checks in at 105.  All of them will have to play well either this week or in the first playoff  event.  Koepka and Rose are playing this week.  Koepka, Rose and Spieth will play together on Thursday and Friday.

Two big names outside the top 125 are Zach Johnson and Sergio Garcia.