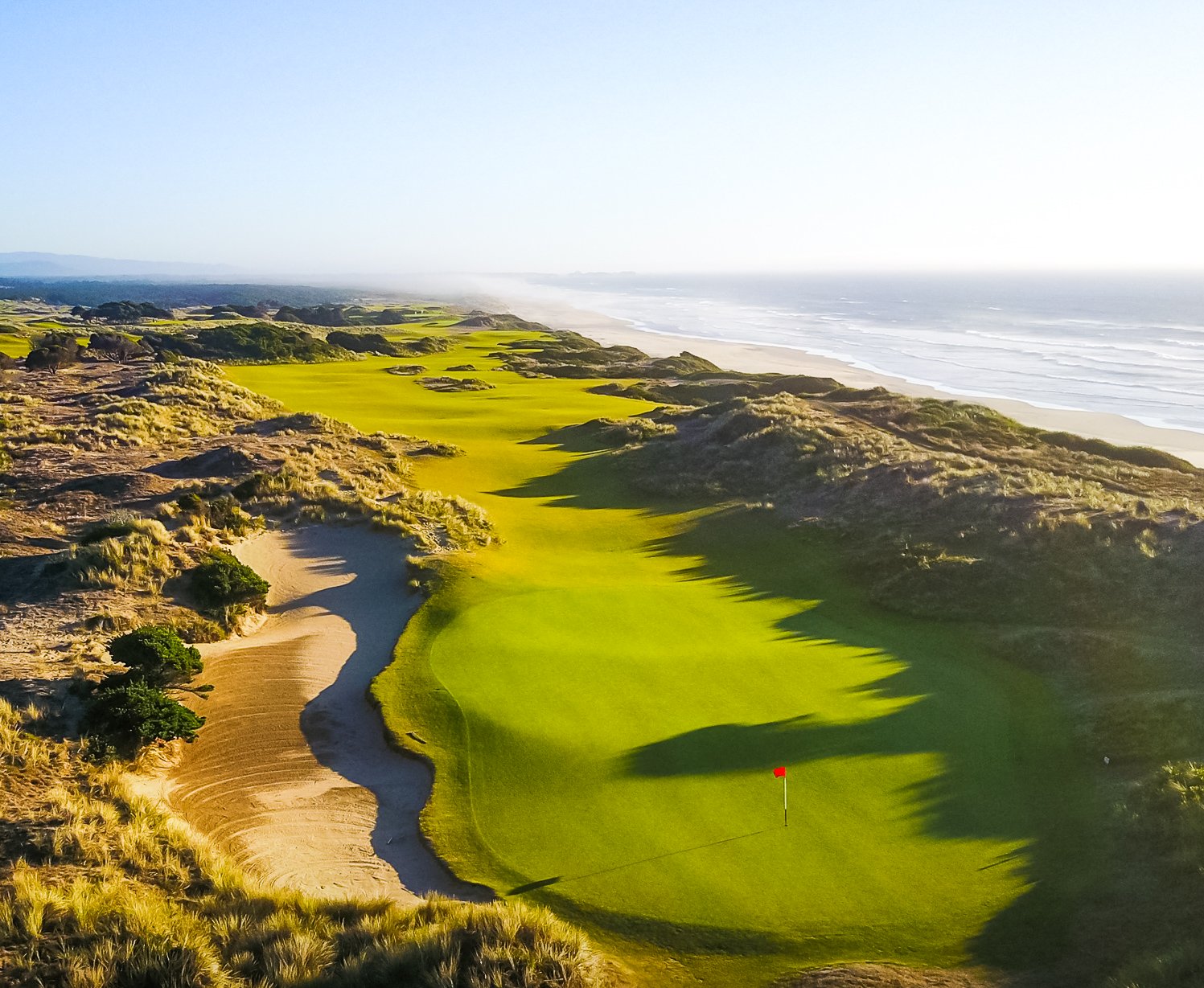 The Bandon Dunes Resort has some of the most spectacular courses in the world.

Brandon Dunes Golf Resort is an amazing golf treasure hidden away virtually in the middle of nowhere on the Pacific Coast of Southern Oregon.

Multi-millionaire developer and links golf lover Mike Keiser took a shot in the dark 20 years ago and bought 1,200 acres that were, indeed, in the middle of nowhere.

“To actually build this course in the middle of nowhere, five hours from Portland and 12 hours from San Francisco, and think anyone would come play it other than a few diehards from Portland is nuts,” Keiser said during a 20th anniversary celebration at the course. “That was the unanimous view of everyone involved, including me. I was just determined to build another course and this was such a good site so it was going to be the golf course.

“In terms of it making sense, it never made sense until lo and behold, during the first year, American golf announced that it loved links golf.  That’s what we didn’t know until the first year — in terms of it being a rational decision, it wasn’t. It was foolhardy from the day I conceived this.”

Keiser originally looked to the eastern side of the United States to build a course before a friend directed him toward the Oregon Coast.

“It was 1,200 acres with a mile of ocean frontage, just seeing it was magical,” Keiser said. “I thought ‘If you can do this Mike, do it even though it doesn’t make any sense’.”

Fast forward 20 years later and Bandon is host to the U.S. Amateur with Bandon Dunes and Bandon Trails hosting 264 players trying to earn one of the 64 match play spots.

Bandon Dunes Golf Resort has been draped in sunshine and winds are whipping off the Pacific Ocean.  For the morning players in the qualifying rounds, it has been relatively calm, once the clock reaches noon and beyond, Mother Nature took over with wind gusts of 20 to 30 miles per hour.

The difference between the morning and afternoon wave was 3.53 strokes (73.83-77.36), all due to the increase in wind speed as the day progressed. In terms of relation to par, the late wave (132 players) was +583 worse than those who went off in the morning.

This week, the matches will be televised and there’s a tremendous opportunity to see the amazing vistas at two of the five resort courses.

After the 36-hole qualifier on Monday and Tuesday, Wilson Fur emerged as the medalist.  After an opening 70, he set a new competitive course record at Bandon Trails Tuesday.

Furr, a rising senior at the University of Alabama, carded a 9-under-par 62 in the windy conditions to earn the No. 1 seed for the match play by two strokes over James Piot.

The 62 matched the second-lowest 18-hole score in U.S. Amateur history – Jeff Wilson also shot 62 in 2011 at The Home Course in Dupont, Wash.  Fur’s effort was two shots better than the previous course record that was set 24 hours earlier by Aman Gupta of Oklahoma State.  Gupta go into the qualifier as an alternate.  He tied for fifth, following up that 64 with 73 on Tuesday.

Some very big names failed to make it to the match play, including last year’s champion — Andy Ogletree from Georgia Tech.  Ogletree shot 74-72 and his three-over total missed by a shot of making an 18-man playoff for three spots.  Texas standout Cole Hammer won’t be in the match play either.  He shot 74-72 and missed the playoff by a shot.  Preston Summerhays shot 71-76 to miss out as did the Coody twins — Parker (73-76, plus six) and Pierceson (73-78, plus eight).

The playoff was scheduled for Wednesday morning with the match play to begin afterward.

The European Tour heads to a familiar site this week for the first of back-to-back events at Celtic Manor Resort.

Celtic Manor was the site for the 2010 Ryder Cup and starting Thursday, it hosts the Celtic Classic.  The following week the Wales Open will take place on the same layout — the Celtic Mantor Twenty Ten course.

Danielle Kang, with back-to-back LPGA Tour wins, will head the field for this week’s Ladies Scottish Open at the Renaissance Club outside Ediburgh.

Kang made up five shots over the final five holes last Sunday at the Marathon Classic to beat Lydia Ko.

Kang has risen to No. 2 in the Rolex World Rankings.  This event is co-sanctioned by the LPGA Tour and the Ladies European Tour.

Defending champion M.J. Hur will not play, she’s at home in South Korea, opting to stay there due to travel concerns related to COVID-19.

This is the first of two events in Scotland.  Royal Troon hosts the Ladies British Open next week.

Masters Makes Its Decision:  No Patrons On Site In November:

You could sense this one coming.

The Augusta National Golf Club announced on Wednesday that there will be no patrons allowed on site when the tournament is played this coming November.

“Since our initial announcement to postpone the 2020 Masters, we have remained committed to a rescheduled tournament in November while continually examining how best to host a global sporting event amid this pandemic.  As we have considered the issues facing us, the health and safety of everyone associated with the Masters always has been our first and most important priority.

“Throughout this process, we have consulted with health officials and a variety of subject matter experts. Ultimately, we determined that the potential risks of welcoming patrons and guests to our grounds in November are simply too significant to overcome.

“Even in the current circumstances, staging the Masters without patrons is deeply disappointing. The guests who come to Augusta each spring from around the world are a key component to making the Tournament so special. Augusta National has the responsibility, however, to understand and accept the challenges associated with this virus and take the necessary precautions to conduct all aspects of the Tournament in a safe manner. We look forward to the day when we can welcome all of our patrons back, hopefully in April 2021.

“We appreciate the support and patience of all those we serve – including the Augusta community, our corporate and broadcast partners and our friends in golf – as we continue to plan for this historic event.”