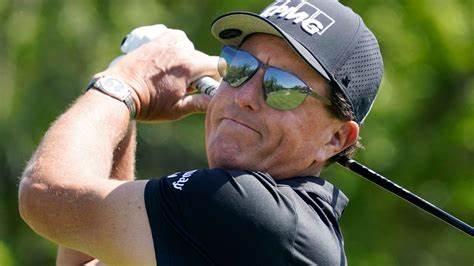 Phil Mickelson got his third senior win two weeks ago in Jacksonville.

Phil Mickelson is every player over 50’s worst nightmare.

Lefty has inserted himself into the over-50 set with a bang — winning three of the first four events he’s entered, including the Furyk and Friends gathering in Jacksonville two weeks ago.

Mickelson returns this week at the Dominion Energy, the first of the three playoff events for the Charles Schwab Cup.

Last year, Mickelson trounced Mike Weir on the final day, shooting 17-under for for the event and beating Weir by three shots.  Mickelson is back this year to defend on the James River course at the Country Club of Virginia.  This week’s field of 72 will be cut to 54 for the second event, Nov. 5-7 in Boca Raton for the Timber Tech Championship.  The Schwab Cup Championship returns to Phoenix Country Club Nov. 11-14.

Hottest player on the planet, male or female is Jin Young Ko.

In the last four LPGA events, she has two victories (Portland Classic, Founders Cup) and a tie for second at the Shop Rite.  The world’s No. 2 is the player to beat as the Tour heads across the Pacific to compete at the Ladies BMW Championship at LPGA International Busan, formerly the Asiad Country Club.

Defending champion, South Korea’s Ha Na Jang is back.  She defeated American Danielle Kang in a playoff last year.  Kang, who has fallen to No. 10, is the highest-ranked American in the field — world’s No. 1 Nelly Korda didn’t make the overseas trip.

Nelly Korda Will Play With Father At PNC Championship:

The PNC Championship may be minus its biggest draw this year — Tiger and Charlie Woods — but it will have the world’s No. 1 woman — Nelly Korda and her father, Petr Korda.

Nelly, now a major champion and Olympic gold medalist from the summer games in Tokyo, will compete alongside her Grand Slam-winning dad, the 1998 Australian Open tennis champ, in the limited-field event.

Rose Zhang, the Stanford freshman and former U.S. Women’s and Girl’s Amateur champion, has won her first three collegiate tournaments.  It’s something not even Tiger Woods accomplished when he showed up his first year in college.

Zhang shot 16-under to win the Stanford Intercollegiate by four shots at the Cardinal’s home course, Stanford Golf Course. Zhang’s 54-hole score in relation to par tied teammate Rachel Heck’s program record while Stanford, as a team, matched its previous program best with a 28-under performance while beating San Jose State by 22 shots.

Zhang’s Stanford debut last month at The Molly resulted in a 1-over 73 — but Zhang hasn’t shot over par in eight rounds since. She closed in 68 to win the Molly by three strokes and then captured a difficult Windy City Collegiate by a shot at four- under.

She is a combined 23 under with four rounds in the 60s, 252-0 against her competition and her 69.11 scoring average is more than four shots better than that of Rachel Heck (73.33), who won six times as a freshman last year en route to earning the Annika Award.

It won’t be surprising if Zhang’s a “one-and-done” at Stanford — too much talent and the LPGA Tour is calling.