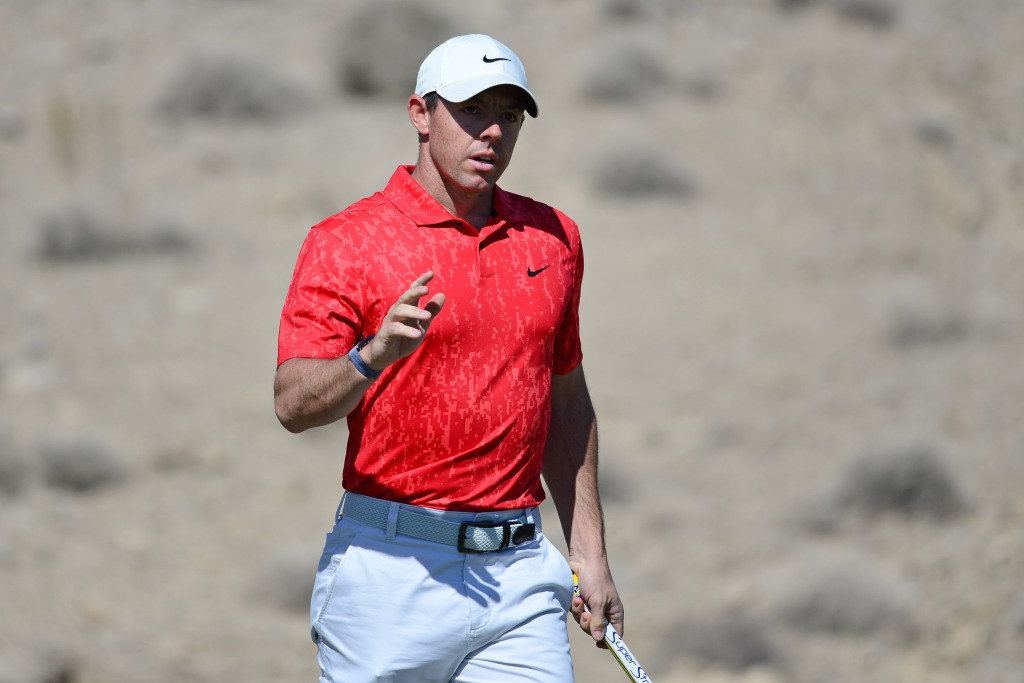 A closing 66 earned McIlroy his 20th win on the PGA Tour.

That was more like it — more of what we expect from the PGA Tour — three of its big-name stars — Rory McIlroy, Collin Morikawa and Rickie Fowler battling over the final nine holes on Sunday and in this case it happened to be in the desert outside Las Vegas at the transplanted CJ Cup.

Birdies were seemingly flowing from the water taps all week at the go-as-low-as-you-want Summit Club.  After a frenzied Saturday free-for-all, Rickie Fowler (21-under) had forged a two-shot lead over Rory McIlroy, the man who wants to be top dog again.  Collin Morikawa, the brightest young star of all of them, had yet to do much on his home course.  He was “only” 14-under through 54 holes.  Rory got there with an incredible Saturday 62, Rickie answered with 63.  Morikawa shot 65, which seemed to be about two-under par on this track.

The Sunday battle was worthy of 18 holes on the broadcast, but no, none of that, Golf Channel was late to the party and the duel was already well under way by the time the cameras focused on McIlroy, Morikawa and Fowler.  By the turn, Rickie and Rory found themselves locked at 22-under.  Rickie will look back and know the double-bogey seven at the sixth hole cost him.  A wayward second into the par five found the desert — not the place to be on Sunday.

Morikawa was well ahead of the final group of Fowler, McIlroy and Abe Ancer.  Collin finally showed what he could do on his local stomping  grounds — he went out in seven-under on the front, then added another birdie at 11 to get to 22-under — making it three in the fray.  He totally cooled off for some odd reason and as likeable Harry Higgs said earlier in the week:  “You’re getting pretty irritated if you’re making pars out here.”

Morikawa has one last wave of his magic wand when he he planted his second into the par-five 18th inside seven feet and when you’re the world’s No. 3 — you make those and Morikawa did just that, putting a 62 on the board and a 24-under par number that got Rory’s attention.  A birdie at 12 got McIlroy to 24-under and he’d make his big move at nearly the same time Morikawa made his.  McIlroy’s second to the par five 14th settled on the fringe just 35 feet from the hole.  His putter came back to life this week and it turned into Excalibur with a single stroke that found the bottom of the hole for eagle — Rory was 25-under and leading.  Rickie was even on the back nine through 14 and as Higgs suggested, he was probably getting irritated.

From that point, McIlroy played a skillful strategy — fairways, greens, hybrids and three-woods off the tees.  He even played the easy 18th as a three-shoter.  Imagine for a guy who can launch ’em past 350 at the Summit Club’s 3,000-feet above sea level altitude, being that wise and patient.

Morikawa saw the writing on the wall.  “Rory’s one of the best in the world for a reason,” he said calmly as he saw that McIlroy had gotten to 25-under.  “I’m happy.  The back nine didn’t go as planned.  It’s been an awesome four days to start the season,” Morikawa said after signing for 62 and 24-under.  He knew the closing stretch didn’t present much of an issue with fairways and greens as part of your plan.

Rory did indeed cruise home with four closing pars for 66, 25-under and that milestone 20th win.  He wasn’t the emotional wreck everyone saw after the Ryder Cup matches.  No, this Rory was all smiles, on his way back into the world’s top 10 where he lands at No. 8 this week, leapfrogging Louie Oosthuizen and Brooks Koepka.

This time we got smiling Rory and the Tour’s a better place with Rory in the winner’s circle, truth be known.  He caught flack on social media for telling everyone that he’s the world’s best when he plays his best but perhaps Morikawa would say the same thing if he was prone to do so.  “Yeah, it’s quite an achievement,” Rory said of Tour win No. 20.  “It’s great, it feels really good — just keep moving forward.”

You could say the same for Fowler, who may have risen from the ashes of his two-year slump.  He was in the thick of it and his old pal Butch Harmon gave him the nod after Rickie missed the cut at the Shriners.  Butch told Rickie he was on the right path (with John Tillery) and hopefully Rickie will stay on that path — the Tour’s a better place with Rickie back in the mix.  For the record, Rickie snared a tie for third with Keith Mitchell.

One might think this could be the start of a season of redemption for Rory and Rickie as well.  Hopefully it is.

“A lot of reflection the last couple of weeks,” said Rory, who speaks freely, more freely than most in the world of professional golf.

Just keep on being yourself, Rory — you’re a nice young lad.