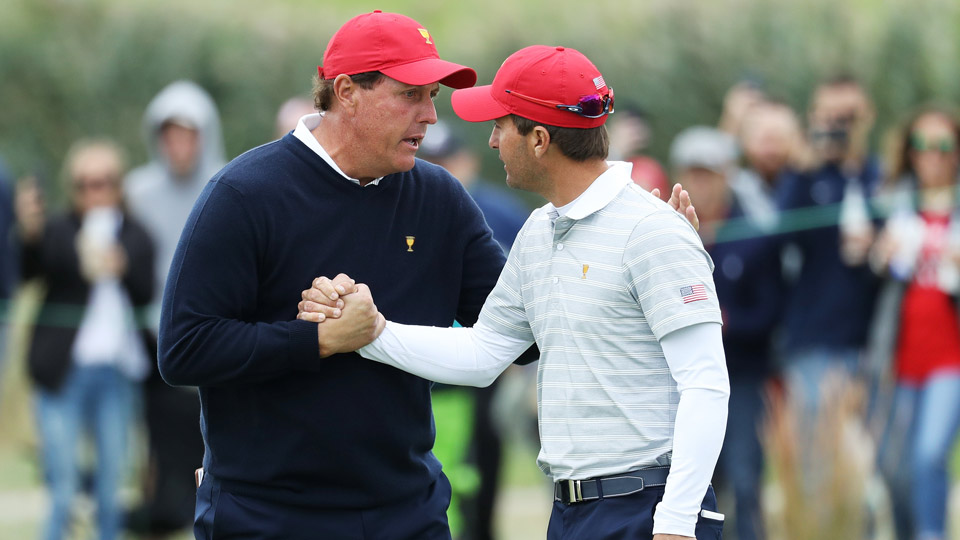 Phil Mickelson loved every minute of the 2017 Presidents Cup matches.

Why not?  It was a stress-free week for Lefty and the rest of the American team.

Another reason — Lefty needs “the action.”

The PGA Tour’s most famous gambler is showing up in Napa this week and there’s a reason.

These cross-over events have much weaker fields and here’s a chance for Mickelson to contend and score more Ryder Cup points.

Fact is, Lefty desperately wants a spot on the 2018 U.S. Ryder Cup team.  He’ll tell you so if you ask him.  No doubt about it.

So you’ll find Lefty at Johnny Miller’s home track this week out there in Napa.  Show up early, get in some practice, go sample some fine wines.

Good work if you can get it.

Along with Mickelson you’ll find most all of the 50 guys who just got their cards through the Web.com season and the finals.  You have the top 25 from the regular season, top 25 from the playoffs.  There are recycled guys like Jonathan Byrd, who won the Web.com Tour Championship on Monday and Sam Saunders, who tied for second.  They fall into that “lost their cards then got ’em back” category.

There’s solid up-and-comers like Tony Finau in the field.  You’d think this kid is poised to get to the next level.

You have guys like Kevin Na who play because that’s what they do.  Na doesn’t win much, but makes a helluva lot of money playing golf.

You have guys like Webb Simpson who made some noise in the playoffs but are still trying to regain their form from years past.

Then you have guys who make this field who have very limited status.  Guys like Tommy Gainey.  Yeah, whatever happened to old “two gloves?”

You’ll see a lot of players in this week’s field you haven’t seen in a while.

And therein lies the appeal for Mickelson.

If Lefty’s going to break through and get a win, it might be in an event like this.