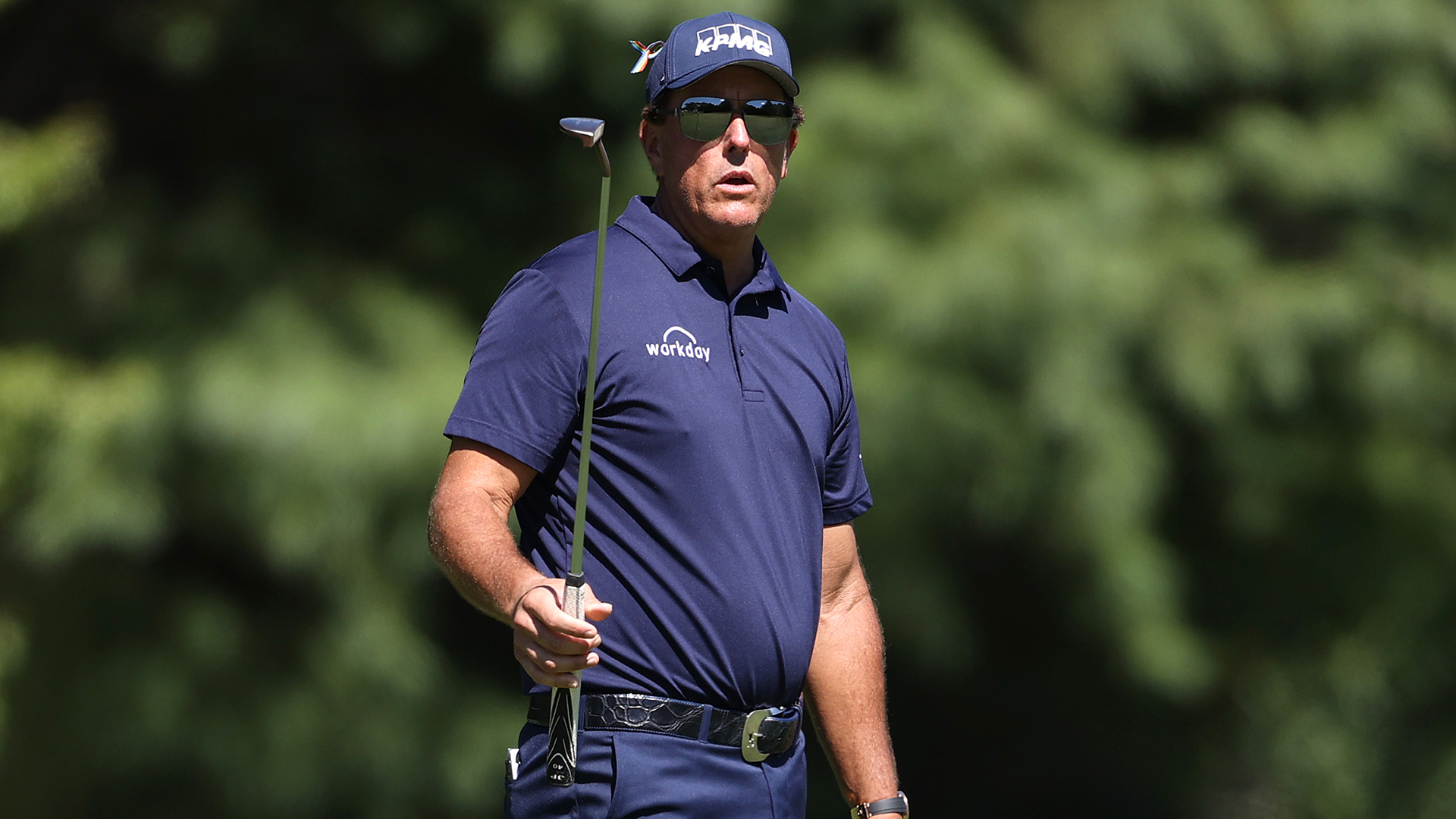 But that didn’t stop Mickelson from opening with with a six-under par 65 to tie Furyk and Kirk Triplett for the first round lead at the Charles Schwab Cup Championship.

Mickelson came in at No. 27 in the points race but Phoenix Country Club is one of his favorite courses.  “I love it — it’s a fun course to play.  It’s in pristine shape. I made some putts on the back nine.  On these greens you always feel like you have have made more,” said Mickelson, who’s looking for a fourth win on the Champions Tour.

It is Furyk who has the most to gain this week as he tries to overtake Schwab points leader Bernhard Langer for the Cup.

Langer tweaked his back during Wednesday’s Pro-Am and it didn’t get any better during the first round as he struggled with his swing but still gutted it out and posted a three-under par 68 that put him in a tie for 15th.  Only Langer, Furyk, Ernie Els and Miguel Angel Jimenez have changes to win the Schwab Cup.  Furyk, with his opening round, is now in the driver’s seat as Els tied Langer’s 68 and Jimenez found himself tied for 27th in the 35-player field.

The amazing story of Steve Alker continues.  The Australian who started with no status on the Champions Tour, won last week and is now one of the Tour’s top 35, shot a five-under par 66 that put him in the thick of the hunt for this season-ending championship.

A strong weather front blew through the Houston area on Thursday and a 90-minute delay meant the first round of the Houston Open was pushed into Friday.

Among the players who finished, Russell Henley, Talor Gooch and Marc Leishman were the best on the board with five-under par rounds of 65 at Memorial Park.

Luke List was five under with three holes to play and has a chance to take the lead on Friday.

Jason Dufner, who’s been dwelling in obscurity lately, opened with 66.

Tony Finau is the highest-ranked player in the field but his one-under par 69 left him at least four shots off the pace.  Brooks Koepka, a design consultant on the renovation of Memorial Park, was even par through nine holes.

The first round resumes Friday morning.

The last time we saw PGA Tour Rules Boss Carlton “Slugger” White, he was riding off into the sunset of retirement after 40 years as a Tour rules official.

Apparently Slugger has a new gig.

White has joined “the enemy” and apparently has been hired by Greg Norman to head the rules team for the Saudi-backed LIV Golf Investments start-up.

Justin Thomas is one of the few guys with the front gate code for Tiger Woods’ palatial estate on Jupiter Island and J.T.’s been visiting Tiger the past few weeks.

Thomas said last week that Tiger’s doing well “all things considered.”  Which is sort of mum.

As far as Tiger returning to play on the PGA Tour,  J.T. said what a lot of folks are thinking.  “I don’t know.  I know that he’s going to try.  I don’t see him ever playing if he can’t play well.  He doesn’t strike me as a guy that’s going to play at home shooting a bunch of 75s and 76s and he’s like, ‘All right, I’m gonna go give Augusta a try this year.’ That’s just not gonna be him.

“I think he knows that there’s a pretty good chance that this might be the last chance he really has of kinda making another run.  But at the same time, I know how determined he is.  I know he’s gonna want to at least try to give something again.  Obviously, I hope he does . But at the same time, as long as he can be a normal dad again, that’s the No. 1 priority again and the rest is a bonus.”

Thomas added this:  “It’s groundhog day – every day is exactly the same for him.  He’s able to be a dad again, which is most important.  He’s still his sarcastic a-hole self, so nothing’s really changed there. So I’m glad to see he’s as chipper as always.”