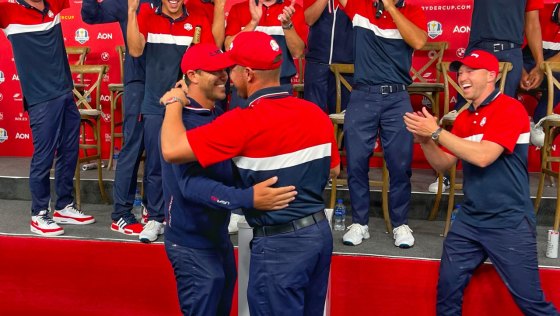 There will probably be no "Bro Hugs" when Bryson and Brooks square off in Vegas.

So where the heck is Bryson DeChambeau and what is everyone’s Mad Scientist up to these days?

A lot of Tour stars are on vacation — Dustin Johnson, Collin Morikawa, Jordan Spieth, and so many others.  Obviously these rinky-dink fall season events aren’t that motivating for the guys who make the most money.

Last time we saw Bryson, he was smashing golf balls with all his might at the World Long Drive Championships out in the middle of nowhere Nevada (Henderson to be exact).  Bryson’s first foray into the world of beastly bashers went pretty well.  He was a hit with the spectators and his fellow competitors.  DogLegNews instructional guru Josh Koch (he finished 11th in the competition) observed:  “Bryson may have felt more at home and at ease around these guys than he does on Tour.”

Bryson hasn’t been sitting around at home playing video games.  No, he’s out on the range tinkering and he has some new, top-secret toys from his club supplier — Cobra Golf.

Cobra’s got something so secret that they’re not showing off the clubs Bryson’s trying out.  According to Bryson himself, the prototype irons were produced by a 3D-printer and that’s a huge departure from the normal cast or forging process used to produce irons.  Cobra’s own club-scientist, Ben Schomin, spilled the beans that Bryson’s current 4 and 5-iron were produced from 3D printing but not the rest of his set.

Bryson went to his own UTube Channel and it showed him testing with a 3-D printed wedge.

These new Cobra clubs are described by Schomin as having “better player shape with a thin, rounded topline, small-to-medium sole width and a rounded sole camber.”  Bryson’s irons of choice the past few years are fairly simple in shape with a lot of leading-edge bounce and a bit of offset at the hosel.

At the start of his testing video, Bryson admitted it will be hard to get him away from his current set.

But this cutting-edge technology could be too much for science-geek Bryson to ignore.

This isn’t something that just came out of the Cobra oven.  It’s been a multi-year process with different models adjusted again and again, sole widths adjusted, face thickness adjusted, bounce variations tried out.

Truth of it all is that over the last five years, Cobra has produced at least a dozen if not more sets of irons with all sorts of Bryson-friendly modifications.

Which leads us to wonder if Bryson might use a couple of those experimental irons when he plays Brooks Koepka in Vegas the day after Thanksgiving.

Bryson hasn’t stepped foot in an event since the Ryder Cup.

On the other hand, Koepka’s been struggling with his game — T67 at Shriners, T38 at the CJ Cup and rounds of 71-71 that resulted in a missed cut at birdie-friendly Mayakoba.

In the meantime, Bryson’s thrashing away on the range.

That 3-D printing sounds intriguing.  But at the end of the day, it’s still a matter of who makes the most putts.