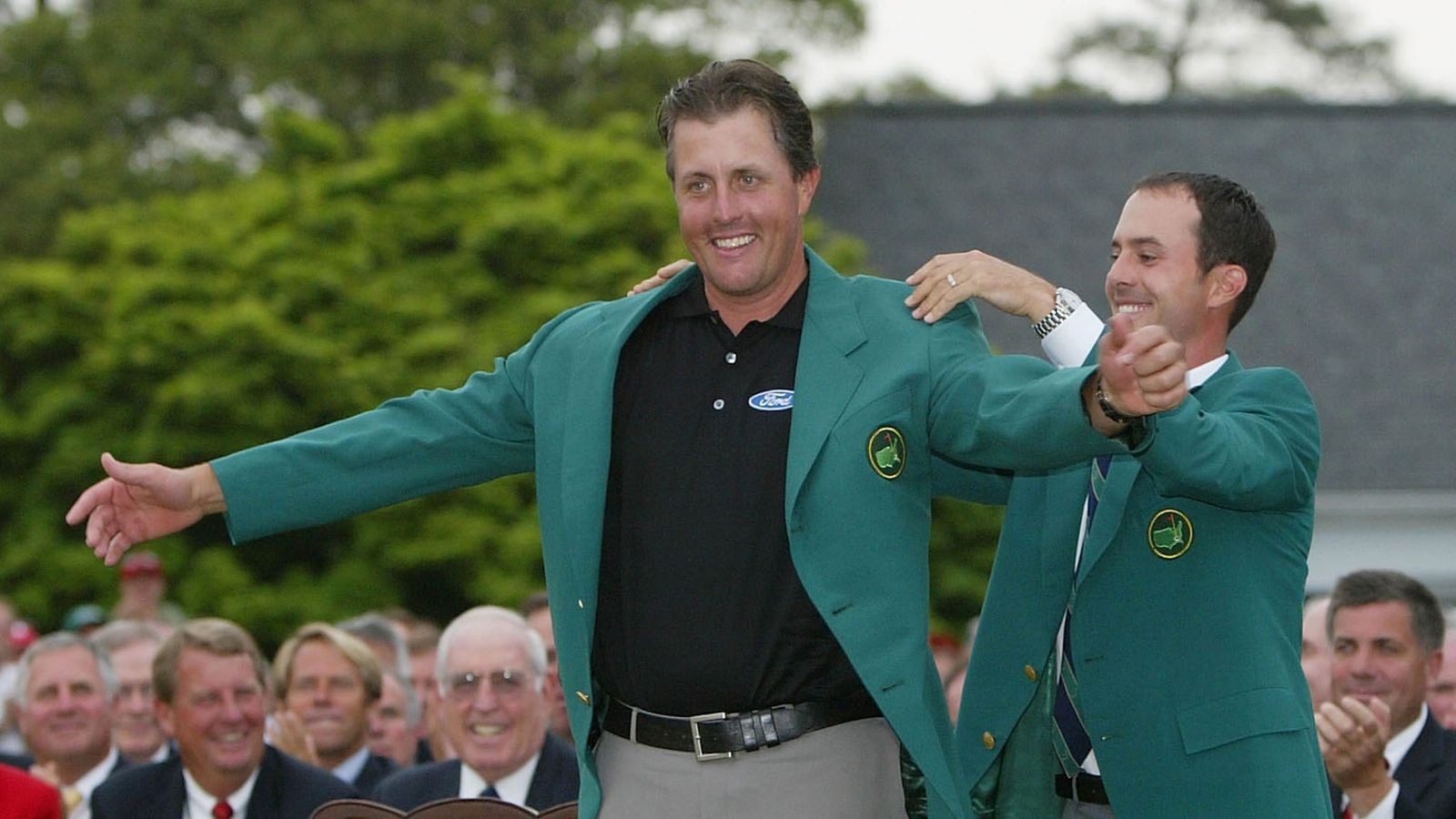 When Phil Mickelson won his first Masters, it was Mike Weir slipping the jacket on Lefty.

Mike Weir went to bed with a three-shot lead at the Dominion Energy Charity Classic Saturday night.  He and the rest of the field had one very long day last Saturday.  Rain washed out the start of this Champions Tour event on Friday and forced the 50-and-over set to play all day Saturday.

Weir shot 68 then fashioned his best effort in years — a nine-under par 63 at the Country Club of Virginia that gave him a nice three-shot lead going into Sunday’s finale.

There was only one problem.

Mikey, the Little Lefty, would have to go head-to-head with Big Lefty — Phil Mickelson — if he wanted to win his first senior event.

We all realize that Big Lefty is the basic Godzilla out there when he makes his way to the “older gentlemen” circuit.  He crushed poor Tim Petrovic and won easily in his first outing.  Now, the little guy who slipped that Green Jacket on Big Lefty way back in 2004, had to try and find a way to win on Sunday.

Truth is, Little Lefty was totally out-gunned in this one.  Three strokes?  Better play well Mikey.

On nice  Virginia fall Sunday afternoon it didn’t take long.  After only six holes, Mickelson birdied half of them to tie it up.  Six straight pars from Little Lefty wasn’t cutting it.  On the seventh, another birdie by Big Lefty and and unfortunate bogey by Little Lefty spotted Phil a two-shot lead.

Weir desperately needed help.  He got it at the par five ninth.  Mickelson hit a tee shot reminiscent of his wide left devil ball at Winged Foot back in 2006.  There was no hospitality tent to stop this one as it bounced on a cart path and landed in the back yard of a Virginia mansion — out-of-bounds.  Big Lefty would take bogey, Little Lefty made his first birdie and it was all square heading to the back nine — both Masters champions were 13-under and it was basically your two-man duel for the title.

“That kinda fried me a little bit,” Mickelson would say later of that typical Phil blunder.  “You can’t make those kind of mistakes.”

Things were looking up for Little Lefty.  Weir actually took the lead with birdie at 12 to go 15-under but there were a bunch of birdie holes coming home and Mickelson, with a 30-40 yard advantage in distance, had things stacked in his favor.

Things turned in Big Lefty’s direction at the reachable (for Phil) 13th, 347-yards.  He made birdie from pin-high left of the green, Weir scrambled for par.  All even.  After a brutally long wait at the testy par three 14.  It was there that Weir made a bad error — three putts from 18 feet for bogey.  Phil didn’t need any help and Weir gave it to him.  Phil drove it on the green at the 274-yard 15th and an easy two-putt birdie upped his lead to two — handwriting on the wall.

Both birdied the par five 16th, parred 17 then Phil ended it all with an easy two-putt birdie from 20 feet at the closing hole — 65 to finish to Weir’s 71 and a winning 17-under par with Weir a distant second at 14-under.

“I played a good back nine,” Mickelson said as he is now two-for-two in his first pair of Champions Tour events, equaling what Bruce Fleisher did back in 1999 and what Jim Furyk did earlier this season.  “I have fun out here. I can play more aggressive,” Mickelson said after the win.  “I can get away with a couple of misses, play a more attacking style.”

Mickelson was also looking ahead to November 12 and The Masters.  “I put a new driver into play this week, trying to get a little more pop, a little more carry. It was a little wayward at times, but it was also effective in allowing me to play this course the way I wanted to, which was aggressively,” Mickelson explained.  “It’s fun for me to come out here and play well and this is a good start for me as I try to build a little bit of momentum heading to Augusta in about a month,” Mickelson added.

As for Little Lefty, this was a blessing for him.  He’s found a place where he can compete.  He hasn’t won anywhere since his 2007 Safeway victory and he lost his card for the regular tour and played the Korn Ferry when he was 48 and 49.  “I haven’t been in this position in a while, but I felt very confident,” Weir said afterward.  “I hit one poor tee shot on number seven. Outside of that, I played really well and just didn’t get anything really out of it.”  He can also look back at the untimely three-putt at 14 as well.

This one played out like most thought it might.  Those short holes down the stretch were ripe for birdies and eagles.  Jim Furyk made back-to-back eagles at 15 and 16, eventually finished in a tie for 13th while another rookie, Sweden’s Robert Karlsson, holed a fairway metal for double-eagle two at the 18th.  That was good for 64 and a tie for ninth.

But this one was all Big Lefty’s.  Two straight to start.

Phil’s finally found a place where he can dominate.