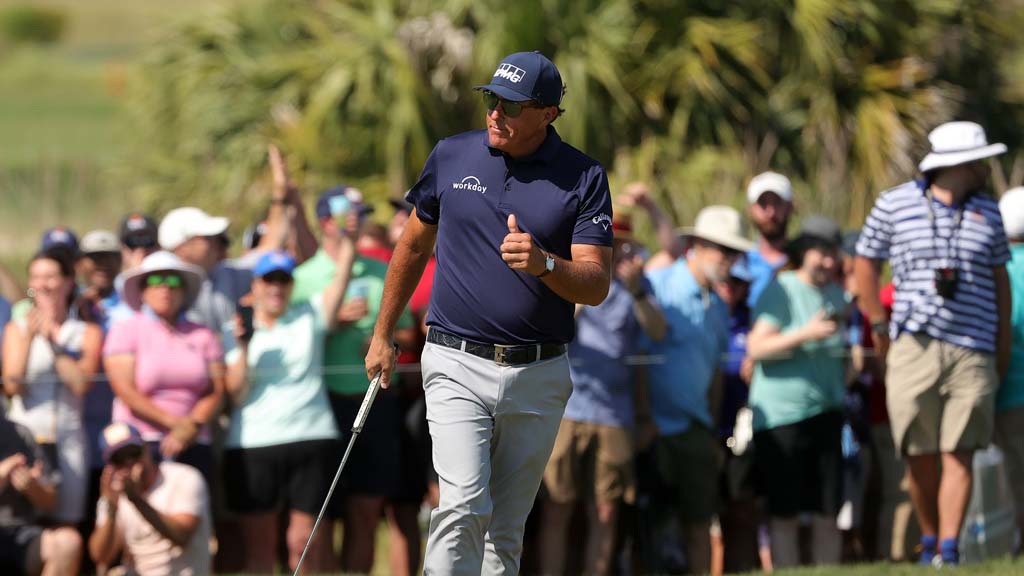 It was a thumbs-up kinda day for Phil on Sunday at the PGA Championship.

Posted By: Tom Edringtonon: May 28, 2021In: The Lesson TeeNo Comments

If you had to pick out a shot from Phil Mickelson that has amazed his fans over the years it would have to be the flop shot.

With Phil winning the PGA Championship last Sunday, we thought it would be great to take a trip back in the time machine and get Lefty to give some pointers on how to hit the shot.

Pay attention and Phil will remind you that it’s a low percentage shot.  So if you are going to use it in competition or even in a Saturday game, make sure you have the proper wedge setup AND you better practice — a lot!!

Phil shows how he hits the flop shot off a tight lie and the adjustments he makes to hit it out of a fluffy lie.

He sets up with his weight forward on tight lies, he sets his weight even on both feet from the fluffy lie.

The older man in the video with Phil is Roger Cleveland — wedge designer extraordinare.

Roger makes Phil’s wedges to the specs that Lefty likes.

Click here for Phil’s primer on hitting the flop shot:

Have fun, enjoy, bust out the 60-degree wedge and PRACTICE!!!