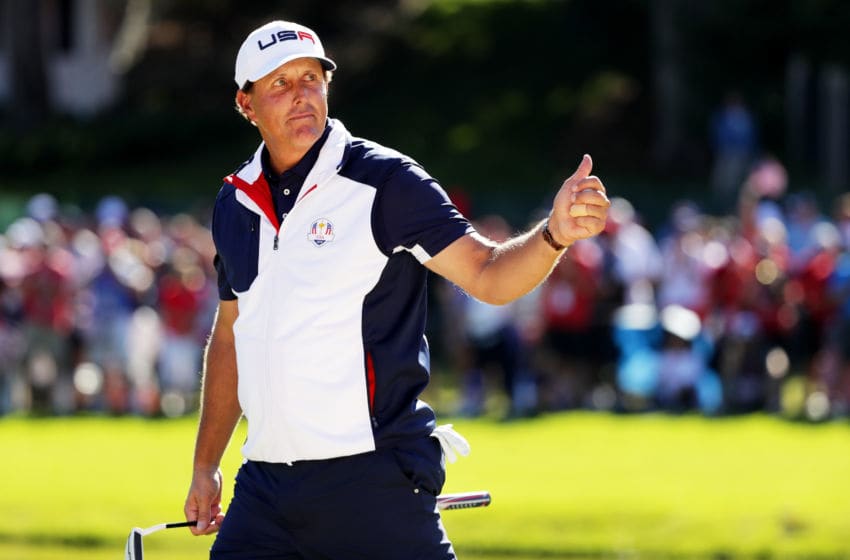 Lefty wasn't impressive enough lately to make the squad as a player.

Posted By: Tom Edringtonon: September 02, 2021In: In Other News...No Comments

Phil Mickelson saw the writing on the wall last week when he basically “volunteered” to be one of Steve Stricker’s vice captains at the upcoming Ryder Cup matches.

Stricker has added Mickelson to the lineup — not as a player but as a cart-riding, walkie-talkie toter along with another familiar face on the U.S. “coaching” squad — Champions Tour veteran Freddie Couples.

“I’ve been staying in close contact with both Freddie and Phil, talking about all things Ryder Cup, for a while now,” Stricker said when he made the announcement on Wednesday.  “They provide honest and impactful feedback, and both have such a passion for the Ryder Cup. I’m honored that they were willing to join our team and help put us in the best position to win in a few weeks at Whistling Straits.”

Mickelson’s name came up as a potential captain’s pick to play after he won the PGA Championship last May and became the oldest player ever to win a major championship.  But his play as slacked off since then and even Mickelson himself admitted he didn’t warrant a selection as a player.

That will take effort as there are perceived personality divides between players — starting with Patrick Reed then proceeding to the Brooks Koepka-Bryson DeChambeau social media feud.

Bryson didn’t make many friends last week when he spouted off at playing partner and opponent Patrick Cantlay last week on the 14th hole of the final round at the BMW Championship, where the soft-spoken Cantlay eventually upended DeChambeau in a six-hole playoff.

Mickelson will hopefully bring a leadership effect to the team room.  He’s been a part of every Ryder Cup team since 1995 and has played in 47 matches.

As for Stricker — he’ll announce his six captain’s picks on Monday after the Tour Championship.

Solheim Cup:   USA Will Be Looking At Korda For Leadership:

Final practice rounds are wrapping up with high anticipation for this weekend’s Solheim Cup competition at the newly-renovated Inverness Club in Toledo.

It’s been a banner year for Nelly Korda although there are still events to be played on the LPGA Tour, including the year-end CME Globe Championship.

“It’s been hectic,” Korda said this week between practice rounds at Inverness.  “But I’ve loved every single minute of it. It’s been a surreal year so far and hopefully we can make it even better this week.”

This is only the second Solheim Cup for Nelly.  She teamed successfully with older sister Jessica in the 2019 matches and although the U.S. lost to Europe, the Korda sisters, as a team, went 2-0.  In 2019, it was about Nelly’s potential.  Now it’s about her results and achievements.  European captain Catriona Matthew said a few weeks ago:  “Certainly, all the pressure will be on her (Nelly) to beat our team.”

“I try not to think about it,” Nelly said.  “There’s definitely a lot of people that kind of try to put it in my head, for sure, but I’m pretty easygoing, I just kind of try to fly under the radar and do my thing, be prepared as best as possible, have fun starting Saturday and hopefully put up some points and just have fun with my pod and my teammates.”

Perhaps Steve Stricker was looking to ease into things in a more informal setting and he did that by hosting a dinner this past Tuesday evening in Atlanta for his six automatic Ryder Cup qualifiers:   Collin Morikawa, Dustin Johnson, Bryson DeChambeau, Brooks Koepka, Justin Thomas and Patrick Cantlay.

Stricker’s agenda included some of the things the players should expect at Whistling Straits and there was, no doubt, some discussion about who he may or may not be considering as a captain’s pick.

This week’s stop on the European Tour is the Marco Simone Golf Club, just outside Rome.  It is hosting this week’s Italian Open and will be the site for the 2023 Ryder Cup.

Henrik Stenson, who’s game has been trending up, put together a seven-under par and was one of the first round co-leaders after Thursday’s opening action.

Stenson had company at the top of the scoreboard including Min Woo Lee from Australia, brother of LPGA star Minjee Lee.  Finland’s Kalle Samooja was also in at seven-under par.

Edoardo Molinari scored the shot of the day when he aced the par three seventh hole and took home a new SUV from tournament sponsor DS Automobiles.  Molinari finished a shot back of the leaders at six-under (65) along with Scott Hend and Eddie Pepperell.

On day two, Tommy Fleetwood went around in 68 and posted the early mark for 36-holes — eight-under par.

When Rory McIlroy gave his three-wood the old heave-ho-into-the-forest at the Liberty National, it kicked off what amounted to a treasure hunt by various club members.

The lost club remained lost until last Sunday and perhaps it was the storm that blew through that brought it out of hiding.

Grounds crew member Michael Bongiovanni out early for another day of work when he saw a club just off the 9th tee.

It turned out to be The Lost Ark Of The McIlroy Covenant.  Bongiovanni’s guess is that the club was perched in a tree and the winds blew it from its perch, into the nearby bush.

McIlroy’s caddie and manager saw pics of the club that were sent to them and they verified that it was indeed, Rory’s reject.

Only question remaining is:  What’s next for the club?  E-Bay?  Liberty National trophy case?  Men’s grill?  So many possibilities!