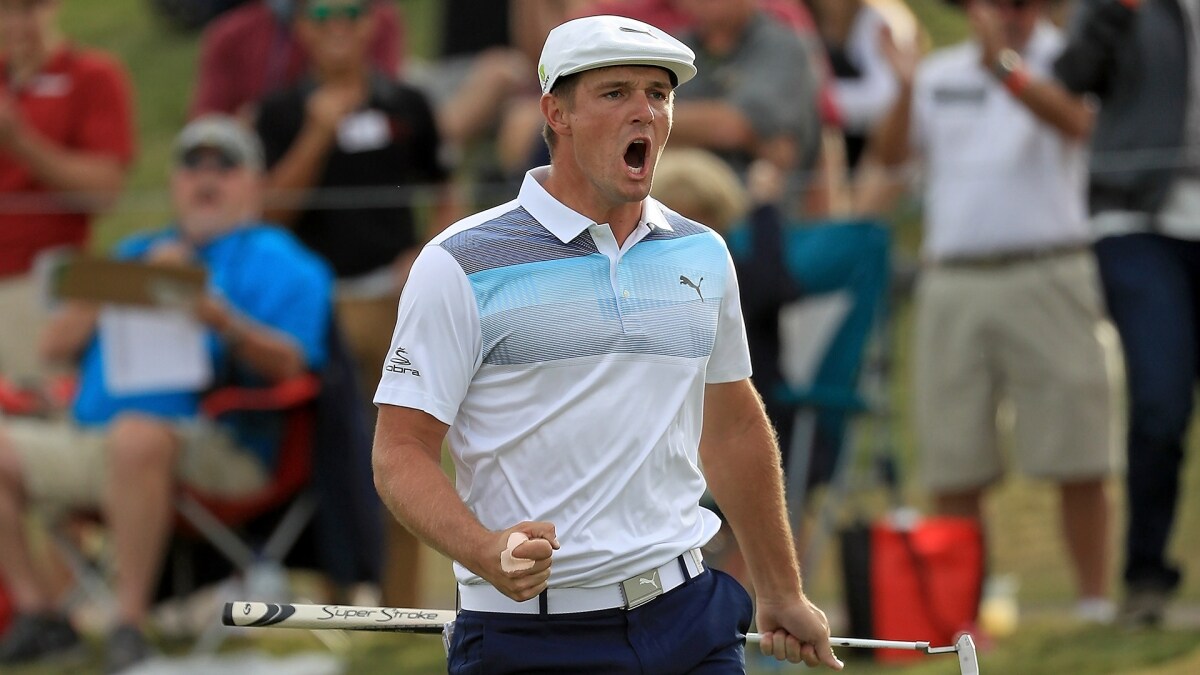 Bryson DeChambeau treaded water on Thursday with an opening 70 at East Lake.

Bryson DeChambeau: “I’m A Little Different And I Understand That….”

Away from the heat of battle with plenty of time behind him after his gut-wrenching loss to Patrick Cantlay last week at the BMW, the PGA Tour’s most controversial star had a serious on-camera discussion of what has transpired around him on the PGA Tour.

DeChambeau is intelligent, pensive and has risen to superstar status on the PGA Tour but he’s become a target for unfiltered fans as well as fellow Tour star Brooks Koepka.

Speaking this week, DeChambeau made some interesting points, they included:

Ryder Cup:  “We’re trying to figure out how to beat the Europeans.  If we can focus on being the best we can be — we’ll win.”

On Brooks Koepka:  “An interesting character.”

On the heckling by fans:  “Everybody has their own limits.  I’m gonna use that in a positive way.”

“It’s about the future of the game,” DeChambeau said of his major concern.

DeChambeau and Koepka were two of he six players who had dinner on Tuesday in Atlanta, Ryder Cup captain Stricker invited all six automatic qualifiers for a sit-down and discussion about plans for Whistling Straits.

But first things first.  DeChambeau started Thursday’s first round in the third position — three shots behind Patrick Cantlay, who starts at 10-under par and just a shot back of second-seed Tony Finau, who starts at eight-under.  With his fire-power, seven shots could be plenty for DeChambeau.

With the 20th anniversary of the 9-11 terrorist attack a few days away, DeChambeau has made a nice move to honor first responders and military veterans.

He will be donating $1,000 for every birdie he makes during the Tour Championship to the Tunnel To Towers Foundation.  “The people who acted heroically on 9-11 are true patriots and it’s all of our duty to honor them appropriately,” DeChambeau said.  “I truly hope this initiative will inspire people to support real American heroes and their families.”

Tunnel To Towers Foundation honors the legacy of New York firefighter Stephen Siller.  He had just finished his shift at Brooklyn Squad One and was on his way to play golf with his brothers when he heard over his scanner that a plane hit the North Tower of the World Trade Center.  Siller called his wife and asked her to tell his brother he would catch up with them later as he returned to Squad One to get his equipment.

Siller drove his truck to the entrance of the Brooklyn Battery Tunnel, but it had already been closed for security purposes. Determined to carry out his duty, he strapped 60-pounds of gear to his back, and raced on foot through the tunnel to the Twin Towers, where he gave up his life while saving others.

Trey Mullinax is one of many PGA Tour players looking to regain their playing privileges and he took a big step in the right direction Thursday at the Victoria National Golf Club.