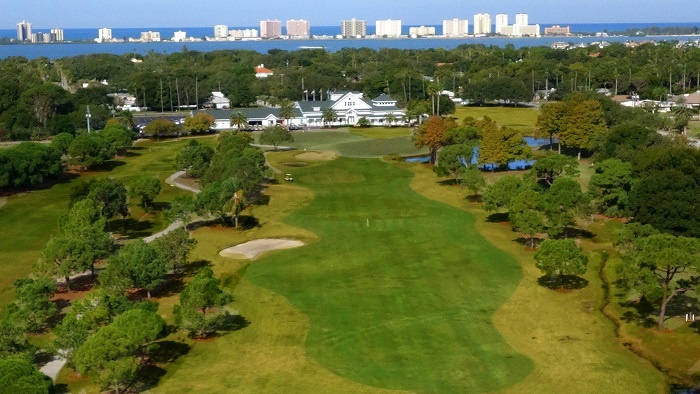 The wind-swept Pelican Golf Club was a tough nut to crack on Thursday.

Sophia Popov is now a full-fledged member of the LPGA Tour and she’s the only one who got the best of the wind-blown Pelican Golf Club on Thursday.

Popov the current Women’s Open champion fashioned a six-under par 64 on the restored Donald Ross layout, the best of a decorated field at the Pelican Open.

The German star, now ranked 28th in the world, was two shots clear of her closest competition — South African Ashleigh Buhai, who opened with a nice 66.

World No. 2 and 2020 Ladies PGA champion Sei Young Kim was just three back, shooting 67 along with American Ally McDonald.

The scoreboard started getting crowded at two-under par 68.  Seventh-ranked Brooke Henderson and No. 8 Minjee Lee headed a group of seven tied at two-under.

Brittany Lincicome, who lives a short drive from the course, opened with a one-under par 69

The world’s No. 1 found out that she was a bit rusty and with winds blowing north of 15 miles per hour and small craft warnings in the nearby Gulf of Mexico, Jin Young Ko finished over par with a 72 that tied her for 46th.

With America’s highest ranked players not in the field — Nelly Korda and Danielle Kang — Lexi Thompson, who has fallen out of the top 10 and is now 11th, shot even par 70.  Thompson scored a hole-in-one on the third hole, her 12th of the day when he jarred a nine-iron from 162-yards.  It was her fifth ace as a pro.

Overall, it was a testy day for the ladies as only 21 players managed to shoot under par.

Nienaber may be the European Tour’s equivalent of Bryson DeChambeau.  One of many highlights of Nienaber’s opening round came at the long fourth, where he sent his tee shot a whopping 439 yards before knocking his approach to five feet.

Nienaber, who won the 2019 South African Amateur Championship before turning professional last year, is playing in his 11th European Tour event since the restart.

Both of the leaders played in the morning wave and no one in the afternoon caught them.  American Johannes Veerman, a former Texas A&M golfer, shot 64 as did Canadian Aaron Cockerill.