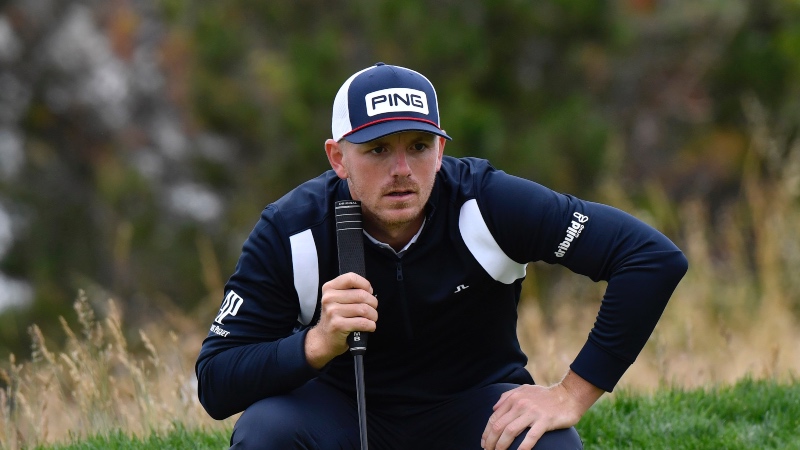 Matt Wallace's 64 was his career-best round on the PGA Tour.

Matt Wallace and a lot of European Tour players who competed in The Masters last week stuck around and made the short trip to Sea Island for the RSM Classic.

Good decision for Wallace as he came up with his career-best score in PGA Tour competition — a six-under par 64 on the Seaside course at Sea Island.  After Wallace signed for his round, Camilo Villegas came in behind him with his own 64 to share the lead on a cool, windy Thursday.

“It was a very tough round,” said Wallace, who used a local caddie after his regular looper tested positive for COVID-19.  “I hit it nicely today but the wind was tough.   On one hole I hit a five-iron from 155 yards and was still short of the green.”  Wallace also acknowledged that he changed putters and corrected his stance and setup.  “I hadn’t been comfortable over the ball,” he said.

For Villegas it was the start he needed as he’s seeking to regain his full-time playing privileges for the PGA Tour.  He’s been going back and forth between some regular tour events and the Korn Ferry Tour.

When Villegas arrived at the range to prepare for his round, he saw a rainbow in the distance. He later said itt made him think of his daughter, Mia, who died from cancer at 22-months old in July.

“She loved colors and rainbows and my wife was all about it. And it was cool. It was a nice way to start the day,” said Villegas, who wears a rainbow ribbon on his hat in her honor. “I start thinking about Mia and said hey, ‘Let’s have a good one.’ ”

Villegas handled the windy conditions (winds 15-20 mph) and birdied three of his final four holes on his first nine and his final hole of the day as he seeks his first PGA Tour win in six years.  “It was tough out here, but I love this place, had success. I’ve been coming here since 2000 and it’s one of those stops I don’t like missing,” Villegas said.

Wallace and Villegas were a shot in front of a group of eight players who came in at five-under par.  Four player on the Seaside course while Keegan Bradley headed another group of four on the Plantation course.

The co-leaders will head over to the Plantation course on Friday and the final 36-holes the cut-survivors move to the Seaside course.