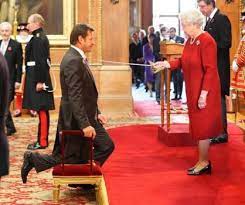 Queen Elizabeth II meant so much to so many and she played a role in the world of golf as well during her 70 years as Queen of England.

When she ascended to the throne at age 25, she immediately became part of the world of golf as she accepted Patronage of the Royal and Ancient Golf Club of St. Andrews.

That has been the custom for the monarchy dating back to King William IV in 1834.

The world was a different place when she became Queen and it was a lifetime of service to her country.

Among her royal duties was awarding Knighthood to notable citizens of the U.K. who made important achievements.

During those 70 years, four golfers where inducted into the Most Excellent Order of the British Empire.  The reigning monarch is sovereign The Order and oversees all appointments with counsel from the government.

Sir Henry Cotton received his Knighthood in 1988.  Cotton was considered the leading British player of his generation.  He won The Open in 1934, ’37 and ’48. Cotton accepted the knighthood before his death in 1987, and it was made effective from the date of his death, despite being formally awarded at the New Year Honors 1988.

Sir Bob Charles was knighted by the Queen in 1999.  He was the first left-hander to win a golf major, the 1963 Open.  Charles, a New Zealander won more than 70 worldwide titles and beat his age twice as a 71-year-old. He is now 86.

Sir Nick Faldo was knighted in 2009.  The former world No. 1 won six majors, including three Open Championships. Following his retirement, Faldo was a golf analyst for multiple networks, including Golf Channel and most notably, CBS.  He retired from broadcasting at the end of this past season.

Dame Laura Davies received her honors in 2014 and would be the last golfer honored by Queen Elizabeth.  Davies is considered Britain’s most accomplished female player and is still active on the LPGA Tour and Ladies European Tour, which she joined in 1988 and 1985, respectively. She was the first golfer, male or female, to win tournaments on five continents in one year. She owns four major titles.

The Queen herself was not a golfer.  She was an equestrian and still rode horses at her beloved Balmoral estate in Scotland well into her 80s.

It was at Balmoral where she passed away in the early evening last Thursday.

But her love of Scotland connected her to golfers around the world, especially those who travel to then fall in love with Scotland.

For those 70 impressive years on the throne, Scotland and Balmoral in particular, was her place of peace and happiness.

Perhaps it was fitting that she was there when she left us.