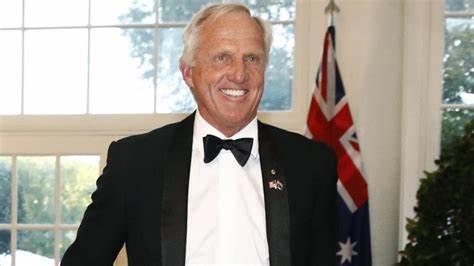 Greg Norman is all dressed with no where to go -- at least as far as the R&A is concerned.

“We have replied to him,’’ a spokesman for the R&A said. “There is no change to our position.’’

And the R&A’s position is basically:  No Soup For You, Greg Norman!

The R&A took that stance early and confirmed that “no change” in their mindset, which denies said Special Exemption to The Lamest Commissioner In The Land.

The Open Championship welcomes past champions in the field up to the age of 60.  There’s another way in if you place in the top 10 after the age of 60 — that gets you another five years free ride into the oldest of the major championships.  Tom Watson nearly won in 2009 at age 59, so he was good for 2010=2014.  The R&A tacked on another year so Tom could finish his Open days at St. Andrews in 2014.

“I’m disappointed with their decision, particularly given it is the 150th Open,’’ Norman said. “I have been a staunch proponent of the R&A since 1977 and a proud Champion Golfer of the Year – twice.’’

Of course, Norman added that he would not attempt to earn his way into the event.

Once upon a time Thorbjorn Olesen was a rising star on the European (DP World) Tour.  Then came his little “incident” on a long plane ride from Memphis to London where he was behaving so badly he was arrested upon touchdown at Heathrow.

His suspension from the tour is over and now he’s trying to work his way back to his previous form and he found some of it on Thursday during the opening round of the British Masters at The Belfry.  He shot a bogey-free 66.

Olesen is a five-time winner on the DP World Tour, his last victory came in 2018.  He made the European Ryder Cup team that year but his legal troubles kept him off the tour the past couple of seasons.

“Obviously a good start with birdie on 10, my first hole,” Olesen said.  “I thought I played really well, thought I’ve had some good rounds this year and just haven’t finished it off.  It was really nice to get that up-and-down on the last and have that momentum and not make a bogey today. I was really pleased with that.

“There’s a lot of things I want to accomplish. You have to stay in the present obviously but it’s been a while since I’ve been in the winner’s circle, and that’s my main goal this year,” he added.  “Obviously I’m working hard on my swing, changed coach. It’s starting to get a lot better and hopefully I can just build on some confidence with it.”

Olesen went out early and set the pace for the morning wave.  In the afternoon, New Zealander Ryan Fox shot his own 66 and he’s tied with Olesen after the first day’s play.

German Hurly Long, China’s Wu Ashun and Scot Richie Ramsay were one shot behind the co-leaders at five-under par.  Rasmus Højgaard, who was a winner at The Belfry in 2020 in the ISPS HANDA UK Championship, among those another stroke further back at 68.