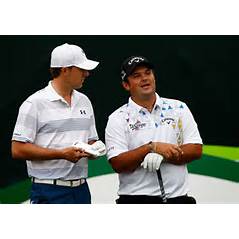 Patrick Reed shot 65, Jordan Spieth 66 in the first round of the TOC.

Reed And Spieth Set The Pace At Kapalua

Jordan Spieth and Patrick Reed enjoy playing together and they showed off a lot of game Thursday at the Tournament of Champions.

Reed hit a perfect second shot into the par five 18th then drained a 16-foot eagle putt for 65 while Spieth followed up with a birdie for 66.

The Ryder Cup teammates are one-two after the first round.

It was simply a matter of the twosome saving the best for last as they went off in the day’s final pairing.

“We seem to play really, really well together,” Spieth said of Reed and himself. “Maybe we wanna beat each other so bad it just brings the best out of us.”

Neither player came close to making a bogey. “I would call it as easy as the course can play,” Spieth said of the day where there was little to no wind and it is the wind that can make the Plantation course play tough.

They’ll play in the final pairing again on Friday.

J.B. Holmes, Danny Lee and Brandt Snedeker were in at six-under par.

Brooks Kopeka, Bubba Watson and Rickie Fowler were in at four-under par.

Jason Day came in after a three-month layoff and he looked a bit rusty on his way to shooting 70 on the par 73 layout.