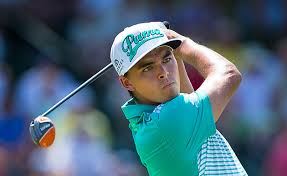 Rickie Fowler moves to fifth in the World Golf Rankings.

Rickie Fowler got off to a tough start on Monday at the Deutsche Bank championship but showed that it’s how you finish that counts most.

Fowler trailed playing partner Henrik Stenson for 15 holes and trailed by as much as three shots with eight holes to play. But things took a mighty turn at the par three 16th hole at the TPC Boston.

Stenson watched as Fowler found the green, albeit 25 feet from the hole. It was then that Stenson made the big mistake that would cost him the tournament. He hit his tee shot left of the hole, it barely cleared the water but hit and bounced back into the hazard. That mistake would result in a double-bogey five that dropped Henson from a one-shot lead to a one-shot deficit.

Fowler was 15-under with two holes to play, Stenson 14-under in what had become a two-man, back-nine duel for the title.

At the par four 17th, Fowler hit a gem of an approach, just 9 feet short of the hole from 165 yards with an eight-iron. Stenson’s second was 14-feet away. After the tall Swede missed his birdie, Fowler had a great chance to virtually ice it but missed his birdie putt.

At the 18th, both players missed the green with their second shots. Stenson’s third left him with a 15-footer for birdie while Fowler was a mere 10 feet away in three. Stenson missed, shot 70, and all Fowler had to do was two-putt for 68 and he did.

Fowler’s victory earned him his first multiple-win season on the tour, he won the Players Championship in May. He also took the Scottish Open on the European Tour the week before the British.

“I hung in there today,” said Fowler, whose opening tee shot went into a hazard. He chopped his ball out, wedged up and drained a long putt for par and that set the tone for his day. “”He (Stenson) made a couple of mistakes,” Fowler pointed out, the biggest was the tee shot at 16.

Third place went to Charley Hoffman, who made a nice comeback after his third round 76. He closed with 67 to finish 11-under, the only other player besides Fowler and Stenson to reach double-digits under par.

The victory moved Fowler into the top five in the FedEx Cup standings, giving him a good shot at winning the $10 million in bonus money at East Lake in three weeks.

“Pretty special,” Fowler said as he walked off the final green.