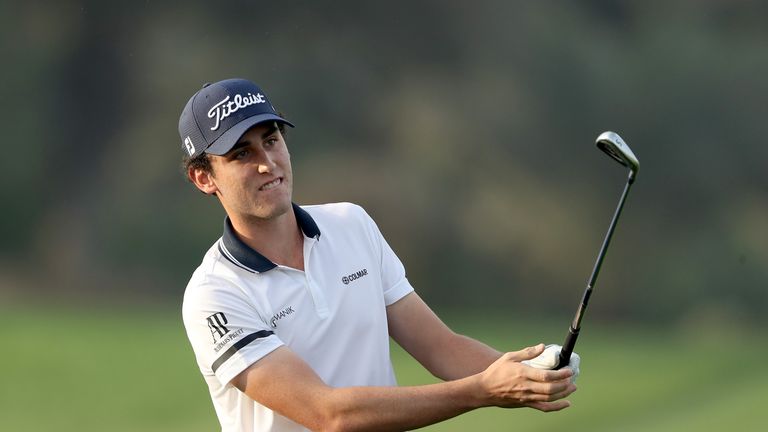 Renato Paratore is the 36-hole leader at the British Masters and the 23-year-old added a 66 to his opening 65 at Close House and finds himself 11-under at the halfway mark.

He’s already won on the European Tour — he captured the Nordea Masters in 2017 at the age of 20 and another win on Saturday can put him on the listing of rising young stars.

“It felt really good today,” said Paratore. “I played really solid, especially the short game. I saved some shots when I needed it, so I’m very happy my game.  It’s obviously a different atmosphere without the crowd but I’m just delighted to be back out playing again.  I like to play every week so for me it’s great being back.

“During the restrictions you just have to accept it. I tried to stay in good shape physically. I did not practice much technically but I just worked every day on the physical aspect.  I practiced a lot when we were able to play after lock-down and Austria (the Austrian Open) was a good week to come back.”

Paratore leads Dale Witnell (68-64) of England and South African Justin Harding (69-63) by a shot heading into the final two days in the first of six European Tour events in the U.K.

Third Round Note: Paratore was still waiting to tee off on “moving day” when England’s Sam Horsfield turned in a dazzling 10-under par 61 that included eagles on all three of the par fives.  He had five birdies and a single bogey kept him from shooting 60.

One of the popular faces in golf is Andrew “Beef” Johnson.  He was in the field at the British Masters but has withdrawn, he’s uncomfortable with the tour’s “bubble” and the current pandemic.

“I’m struggling to get my head around it all,” said Johnston, who was four over par when he stopped playing. “One minute I’m coming out of lock-down, going out for dinner, and then the next I’m back in lock-down in a hotel room.”

After pulling out, Johnston spoke to a European Tour representative and explained his reasons for heading back to his London home.

“I’ve been on-off saying I’m going to play, I’m not going to play, for months,” Johnston said. “I kept changing my mind. But being here and being confined to the hotel, confined to the course and not being able to bring my family is ultimately not what I want and not how I want to live my life. We like to travel as a family, and it’s just been very difficult to get my head around being stuck in those two places and then coming out and trying to compete. It just doesn’t feel right. I tried to come up here, but I was leaving it later and later. I came up Tuesday morning to try to be away as small a time as possible, but it’s not good prep for a tournament and it shows I don’t really want to be here.”

With the future of her playing career shrouded in uncertainty, Michelle Wie will be at the next Solheim Cup in at least one role.

It was Wie who lobbied for the appointment.

“As soon as I heard the news, I immediately texted Pat,” she said.  Wie joins Angela Stanford was previously named one of Hurst’s assistant captains.

Wie said she still hopes to be a playing assistant captain when the matches are staged next year at the Inverness Club in Toledo.