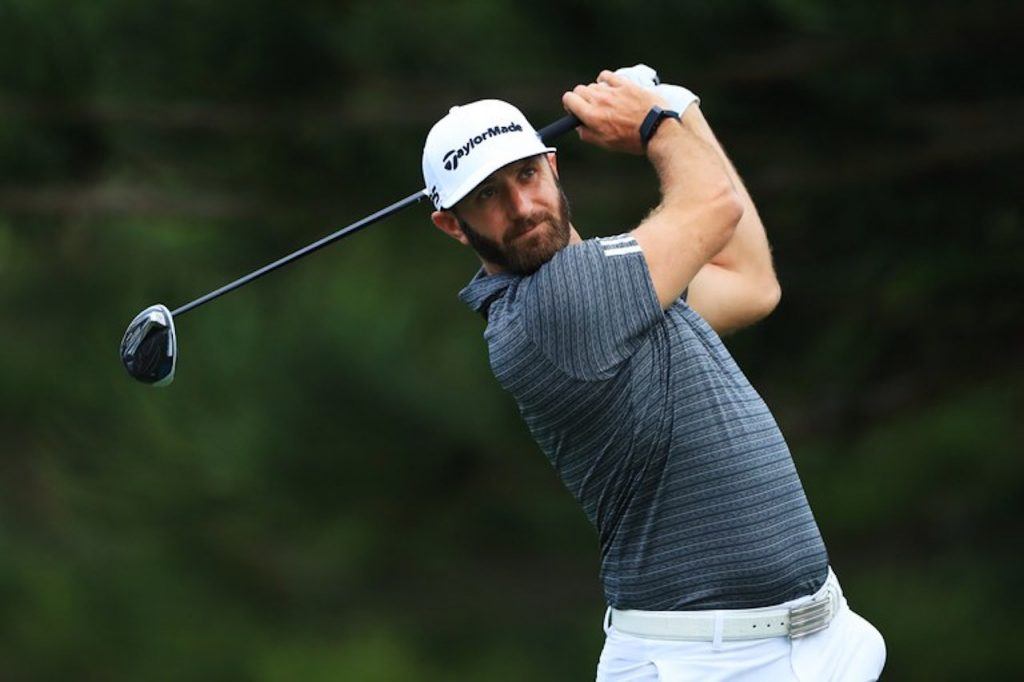 Dustin Johnson made a nine at the 18th hole then withdrew after his first round.

He nearly made it three straight on Thursday at the 3M.

D.J.’s struggles continued at the TPC Twin Cities, which is certainly no Muirfield Village.

The bulk of his issues came late on his first nine, which was the back nine at the TPC-TC.  He bogeyed 16, made double at 17 then total disaster struck at the 18th, where defending champion Matt Wolff won the event last year with eagle.

D.J. made a nine on the short par five and explained his encounter with the water:

“Hit a great drive on 18 and we only had like 199 to cover from where I was, 208 flag, it was a perfect 6-iron,” Johnson recounted after his round.  “I hit it right at it and never once did I think it was going to go in the water. That never crossed my mind when it was in the air.”

Unfortunately for Johnson, that ball did find the water, failing to cover the pond guarding the front of the green. He dropped in the fairway, then hit another iron at the green. That one found the water.  He dropped another, hit it in the water.  Drop again. Short again. D.J. hit his eighth in tight for a kick-in nine and explained:

“It just went in the water and I hit two more shots in the water, then I hit a good one. Made a tap-in for a 9.”

He sounded fine after his interview then inexplicably withdrew from the tournament citing a back injury.  Shortly thereafter his agent indicated that Johnson still plans to play in next week’s WGC-St. Jude followed by the PGA.

D.J.’s withdrawal on Thursday overshadowed the 63 by Richy Werenski, who once upon a time was a part of The Golf Channel show The Big Break.  Werenski birdied his final hole, the par five 18th, to break out of a tie with Michael Thompson, who was alone in second after shooting 64.

Koepka Get It Under Par — Barely:

It wasn’t a spectacular start for Brooks Koepka at the 3M but it wasn’t awful.

Koepka, who needs some high finishes to get himself up the FedEx points list (he’s currently 153), had three bogeys and four birdies on day one for a one-under par 70.  Earlier this week, Koepka fired another shot across the bow of Bryson DeChambeau.

When asked if he has felt the need to raise his game to match DeChambeau’s ever-growing power, Koepka was blunt in his assessment. “I don’t need to keep up with anybody,” Koepka said. “I’m good.”

Tommy Fleetwood is back in the States and is ready to play three straight weeks.  He’s in this week’s field after the 14-day quarantine period required by persons coming in from overseas.

He’s in the 3M and opened with an even-par round of 71 on Thursday.

Tommy will play in next week’s WGC-St. Jude in Memphis then head to San Francisco for the PGA Championship.

Nick Watney was the first player to test positive for the Coronavirus.  “I’ve tested positive for the antibodies and I’m feeling good,” Watney said Thursday after an opening 65 put him just two shots off the lead.

Didn’t have to wait until 5 p.m. on Friday — Tiger Woods tweeted that he won’t play in the WGC-St. Jude this coming week in Memphis.  He’ll wait for the PGA Championship in two weeks.

Tour Begins To Relax Who’s On Site At Coming Events:

The Sheriff of Nottingham (aka Tour Commish Jay Monahan) is loosening things up a bit on the PGA Tour.

The Tour has informed players that tournaments and title sponsors will be allowed to have up to 50 guests per day Thursday through Sunday for the rest of the season.  The Tour will also allow players’ wives and girlfriends (for the single guys)  to be on-site during competition days.

All of these additional persons will not be subject to testing for COVID-19 but will be required to undergo a temperature check and fill out a questionnaire each day upon arrival. There also will be limitations on where they can go once on the grounds.

“These programs will be applied on a tournament-by-tournament basis, in accordance with state and local guidelines in place and at the discretion of the tournament,” Tyler Dennis, the tour’s chief of operations (aka one of The Sheriff’s Henchmen) wrote in an email to the players that was leaked to the appropriate media sites.

They are also going back to those lucky “honorary observers” who walk along with feature groups.  They will have 16 of those per day, two observers per group.

With no pro-ams for the foreseeable future, the Tour will make up to 30 players available to hob-nob with the sponsors on Tuesdays and Wednesdays.

These additions will add about 500 or more persons on site to the approximately 1,100 that includes players, caddies, volunteers, media and officials.

Adam Scott Will Return For The PGA Championship:

Adam Scott’s been sequestered in Australia, hasn’t been seen since the cancellation of The Players in March.

Scott has been on the record citing uncertainty with the PGA Tour’s protocols for the COVID-19 virus.

He’ll make his return in two weeks at the PGA Championship.  Scott confirmed that on Friday.  He’s currently ranked ninth in the world rankings.

Tony Romo wasn’t good enough to beat Mardy Fish, in fact, he didn’t even finish the American Century Championship in Lake Tahoe thanks to a wrist injury.

So it seems confusing that the injured Romo would show up for the Price Cutter event.

Sure enough,  after completing several holes  Romo withdrew thanks to that same bum wrist, deja vue from the American Century.  Seems there was confusion over how many holes Romo actually completed on Thursday.  The Korn Ferry Tour reported that he had played just four holes, while other media members on site reported between six and eight holes. The leaderboard listed Romo as 3 over par at the time of his WD.

As far as the actual leaders at the Price Cutter in Springfield, Mo., Max McGreevy and Rich Lamb opened with eight-under par 64s to share the day one lead.