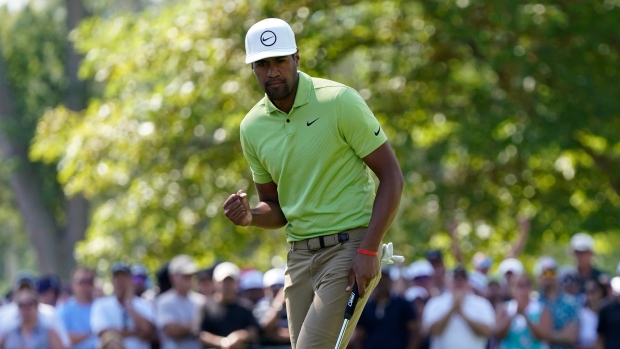 Tony didn’t like the way he finished on his way to winning the 3M last week so all he did was wipe out the rest of the field on Sunday at Detroit County Club and in the process, he became the first back-to-back winner on Tour in three years.

“I was disappointed with my finish last week,” Finau said after shooting a tournament record 26-under par.  “All I wanted to do this week is show I’m a winner and a champion.”

Tony is more than that.

He’s come up the hard way.  Today’s stars typically cut their teeth on lofty college and amateur competition — not Tony.  He turned pro at age 17 and did it the hard way — working his way up from mini-tour golf to the biggest stage.  It’s been a long, tough journey and now at age 32, the PGA Tour’s late-bloomer is in full bloom.

“It feels amazing,” Finau said as he has doubled his PGA Tour victories (this was his fourth) in the past two weeks and in the process, moved himself into the top 10 in the FedEx Cup race and jumped to 16th in the world rankings.

He best described his journey and mindset in one sentence — “Keep your head up and one foot after the other.”

For the longest time, Finau was known as the nice guy who finished second.  Victories avoided him but his immense talent was beginning to show through.

This past week he put on a ball-striking clinic — for most of the four rounds it was fairways and greens and his vastly-improved putting stroke was on full display.  His power looks easy, almost effortless and even more amazing is that he doesn’t wear tradition golf shoes — no spikes, not even soft-spikes — just regular athletic/tennis shoes.  He average 309-yards plus, hit 82 percent of the fairways and 92 percent of the greens — impressive.

But that putter, the club that he struggled with for years, is now a friend.  He got rid of that awkward arm-lock method and now his stroke looks impressive  — a nicer, flowing stroke and this week he was simply unbeatable.

Tony got off to a fast start with rounds of 64-66, then took a share of the 54-hole lead with rookie Taylor Pendrith — both were at a lofty 21-under.

Now here’s where Tony got rid of an old demon.  This was the sixth time he held a 54-hole lead.  He was previously zero-for-five, failing to close those previous leads.  With his final-round 67, he left little doubt who the best man was this week in Detroit.

He made just one bogey all week and that came at the 11th when he three-putted from 70 feet.  All he did was bounce back with a nifty 30-footer for birdie at the toughest hole on the course — the 482-yard 12th.  That got him back to 24-under, four clear of playing partner Pendrith and five ahead of Patrick Cantlay, who made an early run with five front nine birdies.  Birdies at the two finishing par fives — 14 and 17, sent Tony down the 72nd fairway with a five-shot lead and the tournament record in hand.

He was the Rocket Man of the Rocket Mortgage and takes a ton of momentum into the playoffs.

And he’s proving that nice guys do finish first.