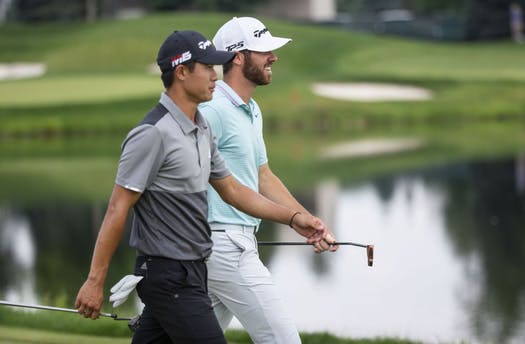 Matt Wolff and Collin Morikawa made a big impact in very few appearances.

Rookie Of The Year: Wolff, Morikawa, Im Or Someone Else?

Time to turn some attention to the candidates for PGA Tour  Rookie Of The Year.

The candidates have been selected by the Players Advisory Board and ballots have gone out to tour members.

Here’s a look at the possibilities:

Cameron Champ:  Won the Sanderson Farms in last season’s crossover events.  Struggled a lot despite his out-of-this-world length off the tee.  Played in 26 events, had just three top 10s.  Did manage to finish 62nd in the FedEx Cup standings.  Champ is 24 years old.

Sungjae Im:  The 21-year-old South Korean was the tour’s ironman.  He played in a whopping 35 events.  Didn’t get a win but made 26 cuts, had 16 top 25s and finished an ultra-high 19th in the FedEx Cup standings, best showing of any of the candidate.

Adam Long:  Oldest of the candidates.  The 31-year-old got his first win at the Desert Classic (the old Bob Hope).  Played in 27 events, made 11 cuts and finished 69th in the FedEx Cup standings.

Collin Morikawa:  Earned tour status with victory at the Barracuda Championship.  Played in only nine events, made all nine cuts, had three top 10s and was 59 in the FedEx Cup standings.  That a lot in a very little time for the 22-year-old.

Matt Wolff:  Like Morikawa, made a big splash in very few events.  He won the 3M, biggest win among the candidates.  He chipped in for eagle at the 72nd hole in Minnesota to beat Morikawa.  Wolff appeared in just eight tournaments and finished 74th in the FedEx Cup standings.  He’s the youngest of the candidates.  He is 20 and left Oklahoma State after just two seasons.

It’s going to be a tough race, a tough, very qualified field for Rookie Of The Year.

Im had the consistency factor but lacked the all important victory.

Wolff and Morikawa had less than 10 events on their resumes.

Long, outside of his victory, didn’t do much the rest of the season.