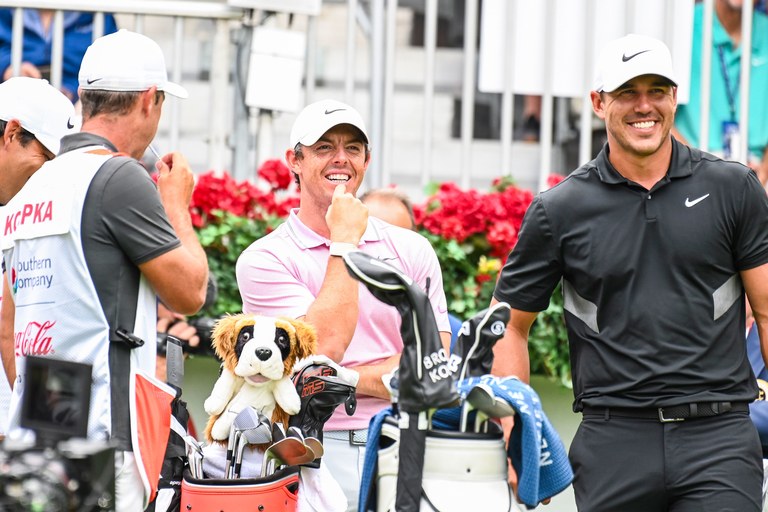 Rory McIlroy and Brooks Koepka are in the same field for the first time in a long time.

Rory, Brooks, Jon And Yes, Tiger — The Gang’s All Here

You get the idea.  The roll call is impressive, very impressive, especially with Eldrick T. Woods on site as host of your 2020 Genesis Invitational, aka The L.A. Open,  out there near Hollywood  at ritzy Riviera Country Club.

Yeah, the gang’s all here for the first time in a long time.  Nine of the top 10 and there are no tears shed with Webb Simpson taking the week off.

With Tiger’s status in the game, the PGA Tour has promoted his event to “elevated status.”  That moniker puts it in the “Invitational” category along with Bay Hill (Arnold Palmer) and The Memorial (Jack Nicklaus).  There’s also a smaller field — 120 players vs. the normal 144 or in the case of the Mob Scene at Pebble Beach — 156.

The money is pretty large as well — $9.3 million smackers with $1,674,000 to the winner — makes it worthwhile putting those annoying Poa Annua greens late in the day.

Jon Rahm wasn’t so lucky.  He’ll have to watch The Human Rain Delay — defending champion J.B. Holmes for two days along with Justin Rose, who isn’t all that quick.

Rory’s got D.J. and Cantlay while Koepka gets Phil and Bubba.  Lefty’s the personality of that group, you could fit Bubba and Brooks’ charisma into a thimble, maybe a shot glass if you’re generous.

All the talking heads are still trying to figure out why Woods can’t win on this historic course.  He made his debut here back in 1992 at the tender age of 16 (can it be that long ago?).

Suffice to say it would be an eye-opener if Woods chalked up No. 83 this week — don’t hold your breath.  But that will be the conversation every time he tees it up until he finally nails it and passes The Slammer for the all-time wins number.

Tiger talked about his pairing and his relationship with Thomas.  “J.T. always wants to win.  He’s highly competitive, highly  motivated.  He’s interested and thirsty for knowledge.  We’ll be very competitive come Thursday and Friday,” Woods observed.  But Tiger couldn’t help getting the needle into his partner at the Presidents Cup:  “I carried his ass in Australia,”  Woods quipped.

Woods recounted his visits to Riviera as a spectator with his father.  “Yeah, I remember watching as a kid.  One time Tom Watson was playing a hole and I ran out to 12 green.  He hit it over the green near me.  Bruce (Edwards, Watson late caddie) came over and said, “Get out of the way, kid,”  Woods recalled.  “Later when I was on tour, I reminded Bruce about that.  He said, “you were in the way.”

Woods says he hopes to play better this week.

His path is simple, as he pointed out — he’ll have to putt better than he has in the past.