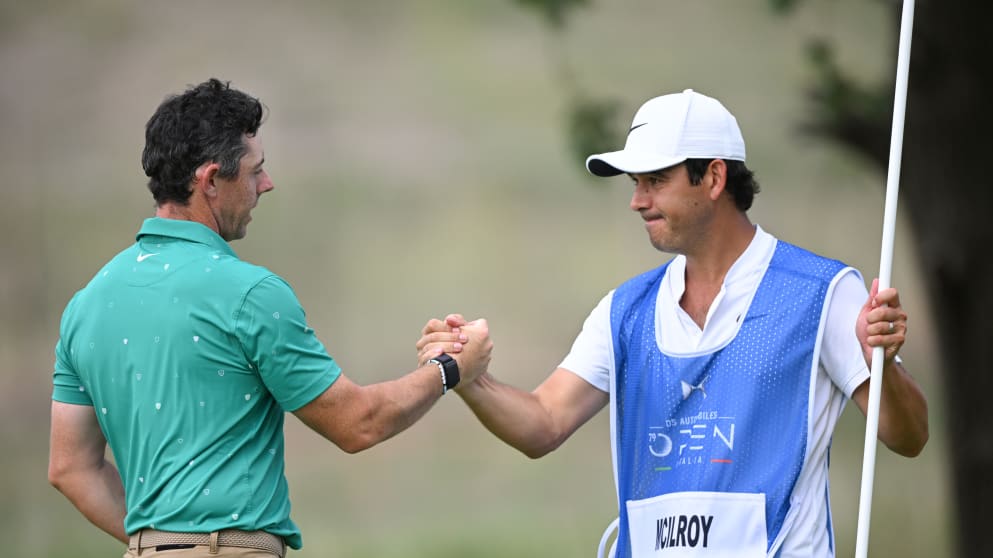 Rory and friend/caddie Harry DIamond had a good trip around Marco Simone on Thursday.

Rory McIlroy was almost apologetic for his slow start early Thursday at the Italian Open.

“I shouldn’t have stayed up so late last night,” Rory said after putting a four-under par 67 on the board at Marco Simone Golf Club, site of next year’s Ryder Cup matches.

“I played the easier nine, not so well,” he explained, as he described a slow start that began on the 10th tee.  Rory basically sleep-walked his way around that back nine, two bogeys and a single birdie left him one-over heading to the front.  And it was there where things turned quickly as he wiped the sleep out of his eyes.

A pair of pars came routinely but then at the par four third with 115 to the hole for his second, Rory’s wedge hit a foot from the cup, spun left and buried itself in the bottom of the hole for an eagle two.  “I think that eagle obviously ignited something and sort of kick-started my round a little bit. I played some really good golf on the way in,” McIlroy recounted after coming home in 30 strokes, following up that eagle with three birdies.

That tied him for the lead in the clubhouse.  Play was delayed early by lightning there outside Rome and by day’s end, darkness halted play with U.S. Open champ Matt Fitzpatrick still on the course with three holes to play.  Fitzpatrick got back out early Friday, added another birdie and his 65 was good for the first round lead.  Surprise contender right behind him was 51-year-old Thomas Bjorn, who shot 66.

As for Rory, his stellar play continued after he finished a shot behind winner Shane Lowry at last week’s BMW PGA at Wentworth.  Rory showed up at Marco Simone with a mission — he wanted to take a closer look at this Ryder Cup site and the European team is very much on his mind.

And McIlroy thinks its time for the Europeans to get a fresh start and flush the elderly LIVers away — so long Sergio, Westwood, Poulter — all Defectors to that exhibition funded by The Infidels.

“I think we were in need of a rebuild, anyway,” McIlroy said earlier this week after he arrived in Italy. “It was sort of, we did well with the same guys for a very long time, but everything comes to an end at some point. I think Whistling Straits is a good sort of demarcation, I guess. That’s all behind us. We have got a core group of guys, but let’s build on that again, and instead of filling those three or four spots with older veterans, let’s blood some rookies and let’s get them in and build toward the future. I think that’s important.”

When quizzed, Rory repeated his stance on The Defectors:  “I have said it once, I’ve said it a hundred times,” McIlroy said. “I don’t think any of those guys should be on the Ryder Cup team.”

Rory’s not the only one checking out Marco Simone.  European captain Luke Donald headed here after playing at Wentworth and he was in good shape for his first round.  He completed 14 holes when the horn sounded and he was two-under.  Donald parred his way in Friday morning and signed for 69.

McIlroy and Donald got together and invited a few other Ryder Cup prospects to dinner earlier this week.  “A few of us are meeting for dinner tonight (Tuesday) for a little bit of team bonding but also to have a talk about the course and how we think it should be set up to favor the European team.”

And the course proved fairly tough on opening day for this championship that is one of the oldest in Europe.

McIlroy pointed out how tough it was to play from the rough — it’s how he came up with both of his first round bogeys.  “If you get it going off line here off the tee it’s very, very difficult,” Rory pointed out.  “The rough is incredibly thick and there’s sort of jungle outside of that if you get it way off line.  So keeping it in the fairway is the big key and then because there’s so many undulations and different levels on the greens, it’s trying to get the ball in the right place on the greens, and because it was so windy today, they slowed the greens up a bit which made it tricky to read them.  The ball wasn’t breaking as much as it has the last couple of days in practice.”

One young player who is a candidate for Donald’s team next year is the defending champion — Nicolai Hojgaard.  Playing with McIlroy, Hojgaard put together a nice three-under par round of 68 to put himself in the conversation.  His twin brother Rasmus was in with a one-under par 70.  Viktor Hovland was one-under for his day through 15 holes.  He went back out with the rest of the Friday early-birds and finished with an even-par 71.

With a number of players who came back for that early, Rory had plenty of time to catch up on his sleep.

As for his chances here, well, Rory was quick with that:  “Just a few things to adjust to, but yeah, overall, if I can get the ball in the fairway the next three days, I should have a chance.”