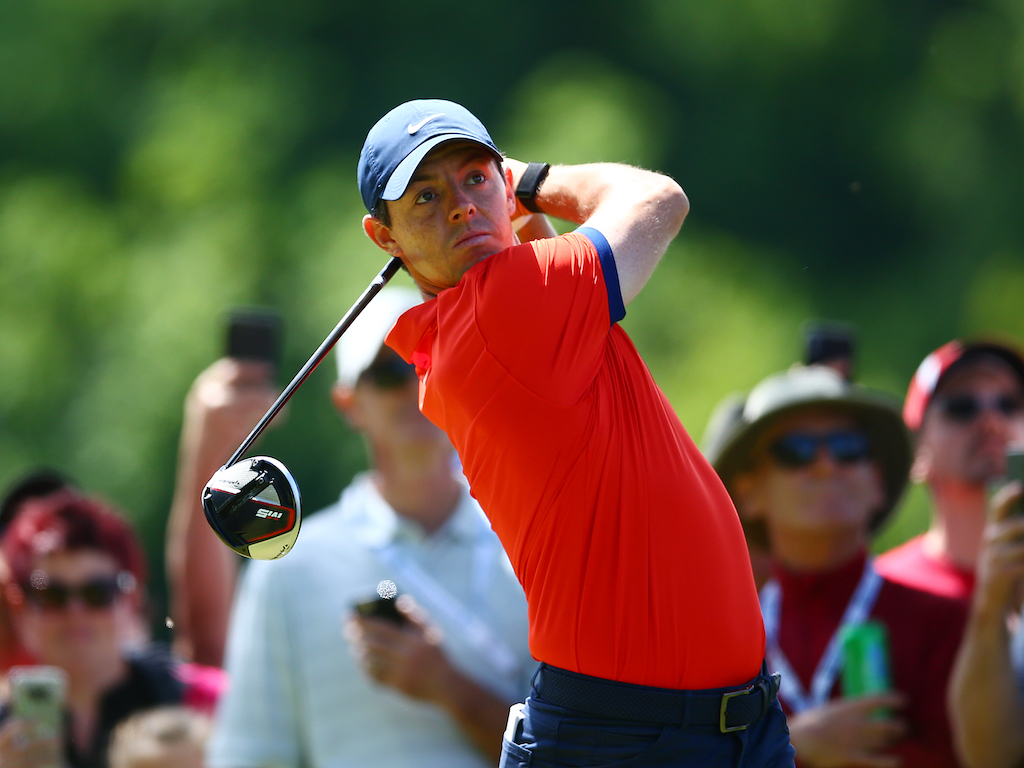 Rory McIlroy's driver was a huge weapon on Sunday in Canada.

The Rory McIlroy everyone has been waiting to see finally showed up over the weekend in Canada.

He showed up with a Saturday 64 that gave him a share of the overnight lead at the Canadian Open, then on Sunday, he went on a scoring rampage that left no doubt as to who was going to walk off with the winner’s trophy.

After his Saturday effort at the Hamilton Golf Club earned him a share of the 54-hole lead, McIlroy showed up and showed up big on Sunday.

“I want to remain aggressive,” McIlroy said before his final 18 holes.  “Stay committed, I think conditions are slightly more benign, 17 or 18 under par, that’s sorta the goal today.”

McIlroy went out and blew 17 or 18 under out of the ball-park.

He pulled out his driver on the first tee, crushed a perfect 353-yard drive that left him just short of the green.  He made a simple pitch to three feet and was off and running.  That set the tone, sent the message for the rest of the round.

At the second he launched another huge drive — 336-yards then from 120 yards out, stuffed it within four feet.  Another birdie.  The par five fourth was no challenge to the Master Blaster.  Easy two-putt for a third birdie then at the par four fifth, he launched a spectacular three-wood that landed pin high on the fringe of the 320-yard par four.  At seven his approach to eight feet gave him a fifth birdie and a 30 at the turn.

If the power and finesse display on the front wasn’t enough, McIlroy went on a four-hole birdie binge starting at the 11th and suddenly the 59 watch was on.

The watch faltered when Rory pulled his tee shot at the par three 16th into a greenside bunker and failed to get up-and-down for par.  The watch went back on when McIlroy reduced the par five 17th to rubble.  He hit a perfect, fairway-splitting 341-yard monster then pulled seven-iron and stuffed it inside three feet from 196.  Easy eagle, 10-under.  Birdie 18 for 59.

That birdie wouldn’t come.  Knowing he had a whopper of an eight-shot lead probably led to a loose second shot that sailed right into a greenside bunker.  He missed that par putt from just inside eight feet but it didn’t matter.  It cost him a 60, which would have been his career low round on tour.  His 61 left him with a 22-under par 258 total — lowest score ever in this antique championship.

It was a pure display, a pure clinic of accurate power off the tee, finesse iron play and wedge play that made McIlroy finally look like he has found a solution to what has been a long-standing problem.

“I’m very proud of myself,” said McIlroy, who stayed the weekend at The Memorial last week after missing the cut.  He did some intensive work on his game, his wedge and short game in particular.

“Just awesome,” McIlroy continued.  “I played with so much freedom (yesterday) and it carried over to today.

“I’m gonna take a lot from this.  I’m excited for next week.”

Defending champion Brooks Koepka may show up and once again declare that no one is more confident than he.

Sixty-one shooting Rory McIlroy might take exception to that.