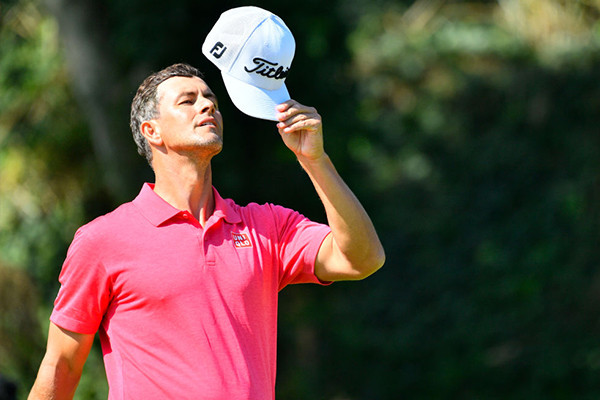 Adam Scott made some clutch putts down the stretch to win at his favorite course.

If there’s a fear that bombers on the PGA Tour are rendering classic golf course obsolete, let Riviera serve as the model to battle that belief.

Riviera put an old-school beat-down on some of the game’s best and made a lot of highly-skilled players look downright silly on a sunny Sunday afternoon outside Los Angeles.

Take host Tiger Woods as a shining example of Riviera’s ability to defend itself.  Woods, the best player on the planet for the past 20 years, shot 76-77 over the weekend and finished dead-last in the field at 11-over par.

And if Woods can’t handle the layout, then what hope is there for the rest?

The scramble for the title at the Genesis Invitational started with world’s No. 1 Rory McIlroy, major champion Adam Scott and Steady-Eddie Matt Kuchar all tied at the top at 10-under par.

Scott, perhaps the only player in the field with a strong love for Riviera, got off to a nice start.  A couple of early birdies had him 12-under through his first three holes.  A bogey at the fourth dropped him back to 11-under, tied with McIlroy and one better than Kuchar.

Then came what may become known as The Fiasco At Five.  Both McIlroy and Scott missed the fairway.  They both made big mistakes with their second shots, going left and long, ending up in the nasty collection area behind the green. Things got instantly ugly.  McIlroy tried to bump a chip on top of the hill, hoping it would take one bounce and trickle toward the cup.  He didn’t hit it hard enough and it rolled all the way back down. Same thing happened to Scott.  He tried to flop it over the gully but came up short and saw his roll back as well. McIlroy got on with his next attempt then  three-putted from 20 feet for triple-bogey seven. Scott got on with his fourth and two-putted for double bogey.

At that moment, McIlroy looked like No. 101 instead of No. 1.  That triple dropped him back to eight-under and to make matters worse, he followed that up with bogey at the par three sixth when he found the wrong side of the par three and had to chip over the bunker that sits in the middle of the putting surface.  He was back to seven-under and took a big punch to the gut from relentless Riviera.

Scott went the other way.  He made birdie to get back to even par for the day, still 10-under, holding the lead by the skin of his teeth.

Kuchar stayed with him until the turn when bogeys at 10 and 12 killed his hopes.

Scott got himself on the championship causeway with two big back nine putts.  The first was a 10-footer that saved par at the difficult 12th then a 12-footer for birdie at the 13th that gave him a two-shot lead.  Another bogey, this one at the 15th, left Scott needing birdie somewhere to seal the deal.  He got it at the par five 17th when he rolled one in from just inside 11 feet to get to 11-under.

The tall Aussie with the picture-perfect swing made routine par at 18 to step into the winner’s circle for the first time in almost four years.  His last PGA Tour win came at the 2016 WGC-Doral.

“It’s amazing,” Scott said after holing his par putt for a one-under par 70.  “I’ve loved this place since day one.  It was a tough day.  It’s a big step whatever point in my career I’m at and I haven’t won for three years.  This feels very, very special — finally a win on my favorite course.”

It might be Scott’s favorite but from look of the scorecards of the rest of the would-be contenders, they may carry a different opinion.

At the end of the day, there were just two winners — Scott and Riviera.