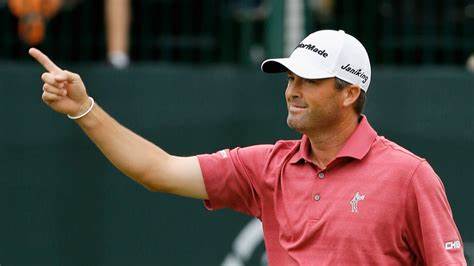 Ryan Palmer is looking for his first win in his home state of Texas.

Ryan Palmer has never won in his home state of Texas.

With 36 holes to play at the Byron Nelson, he’ll have a shot at that Texas win.

Palmer was hotter than the weather on his way to a Friday 62 that got him to 15-under par and tied with unheralded rookie David Skinns and first round leader Sebastian Munoz for the halfway lead.

“It’s been a work in progress this year,” was how Ryan described the state of his game.  “I’m finally playing the way I know I can.”

Palmer, who lives in Dallas and has a large contingent of family and friends watching him this week, had a perfect card with 10 birdies, no bogeys.

Skinns name is unfamiliar to most.  The 40-year-old rookie from England got his card via the Korn Ferry Tour.  He’s played in 11 events this year and missed the cut in eight of them.  But he had his best round of the season — a 63 that tied him with Palmer.

Munoz, who opened play with a dazzling 12-under par 60, found the going a bit tougher on day two and finished with 69.

Jordan Spieth, defending champion K.H. Lee and Joaquin Niemann were all in at 12-under par.

Justin Thomas got to 10-under while world’s No. 1 Scottie Scheffler was in at nine-under, hampered by a triple bogey earlier in his round at the par four 13th.  He played the back nine first but rallied to shoot 68 despite the triple.

After an opening 72, Xander Schauffele got off to a poor start on day two.  He was three-over par for his first five holes but played his final 13 in eight-under par to make the 36-hole cut on the number at five-under par.

Dustin Johnson’s played continued to be unimpressive.  He followed his opening 67 with 70 and is in at seven-under par.