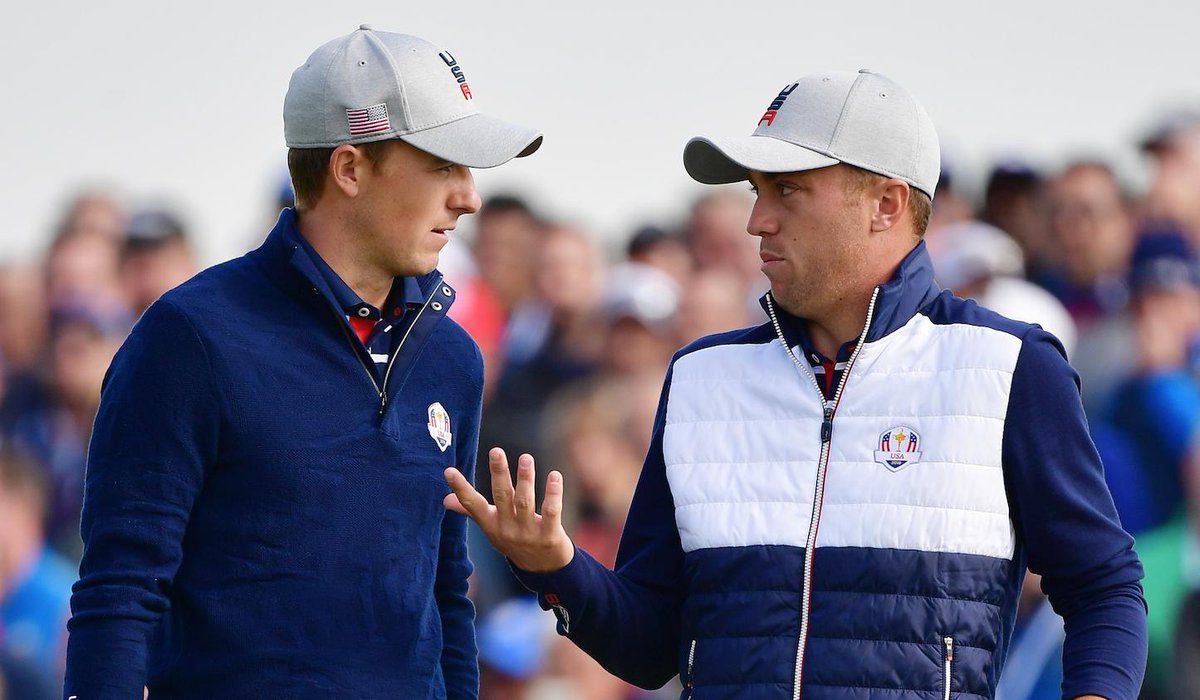 Steve Stricker would be wise to pair Jordan Spieth with Justin Thomas.

The eyes of the golf world are are focused this week on Whistling Straits for what should be an incredibly compelling Ryder Cup that features perhaps the most talented team ever assembled by the good old USA.

The heat is on U.S. captain Steve Stricker when the first ball goes in the air Friday morning.  He’s the first-ever Ryder Cup captain in the modern era without a major championship on his resume.  Over the years, winning the PGA Championship put you in the mix for American captaincy at some point in time with the exception of the biggest blunder ever and that would be the PGA Of America ignoring the impressive career of Larry Nelson (three-time major champion and winner of the PGA in ’81 and ’87).

Stricker is the captain because of who he is and where he is from — Wisconsin.  Thought is the on-site USA faithful will rally around their fellow Cheese-Head and pull his talented team to victory.

Which brings us to said talented team.

Stricker has seven of the world’s top 10 on his squad — an overwhelming number.  He also has an array of young, Ryder Cup un-tested talent in what signals a changing of the guard if you will.  Phil Mickelson’s days as a Ryder Cup player are over, most likely the same for on-the-mend Tiger Woods.  This team has a different look and young players without any Ryder Cup Scar Tissue if you will.

Let’s get right to the leadership of this team — Justin Thomas and Jordan Spieth.  If Stricker is as smart as we hope he is, he’ll send this pair out in the first four sessions on Friday and Saturday.  They’ve got the magic and the mojo and it’s not out-of-the question to expect them to get a minimum of three points out of those first four matches.

“Everybody is on board with what’s best for the team,” Thomas said on Tuesday.  “I’m excited to possibly play with Jordan.”  Possibly?  Stricker better make that happen.

Spieth, likewise, is chomping at the bit.  “I’m pretty excited that we’ve got youth and fire (on our team).”  A Spieth-Thomas pairing brings exactly that plus a lot of experience on Spieth’s side and a 4-1 record by J.T. in Paris (2018) as a first-timer.

Spieth described Whistling Straits as “tough and fair.”  The three-time major champion added:  “You can birdie just about every hole with the right shots.”

Stricker can’t ignore the chemistry between Spieth and Thomas and there’s a lot of familiarity with a lot of these U.S. teammates.  “We’ve known everyone on this team since grade school with the exception of Dustin (Johnson) and Tony (Finau),” Spieth pointed out.

Okay, pencil in Jordy and J.T. for both sessions on Friday and Saturday.

Now for another team we propose:  Patrick Cantlay and Xander Schauffele.  Perfect pairing in skill-set, deportment and achievement.  These guys are cool and calm and when you look at their ball-striking skills and short-game prowess, it’s not a stretch to count on them for three points from the first four sessions. Again, Stricker should send them out in all four sessions over the first two days.

If those teams play above average, it’s within reality that the two dynamic duos could give the U.S. six points.  If the rest of the gang can scrape up, let’s say, three points, the U.S. could take a 9-7 advantage heading into the singles and it’s the singles play where the U.S. has a huge advantage.

Other possible teams? If you go by Tuesday’s 18-hole practice session (the only one as they’ll go just nine on Wednesday, Thursday) you might see:  Dustin Johnson and Collin Morikawa;  Brooks Koepka with Tony Finau;  Daniel Berger with Harris English and Bryson DeChambeau with Scottie Scheffler.

Granted, this all sounds wonderful.  But keep in mind, there’s one huge equalizer here:  IT’S MATCH PLAY.  Truth be known and decades of golf history has proven that in match play, the best player doesn’t always prevail.  Those high rankings for the U.S. players are earned over four days of stroke play.  This match play and this Ryder Cup contest in particular, is a different animal.

Spieth summed it up best:

“The Ryder Cup is more about emotion that any other tournament.”