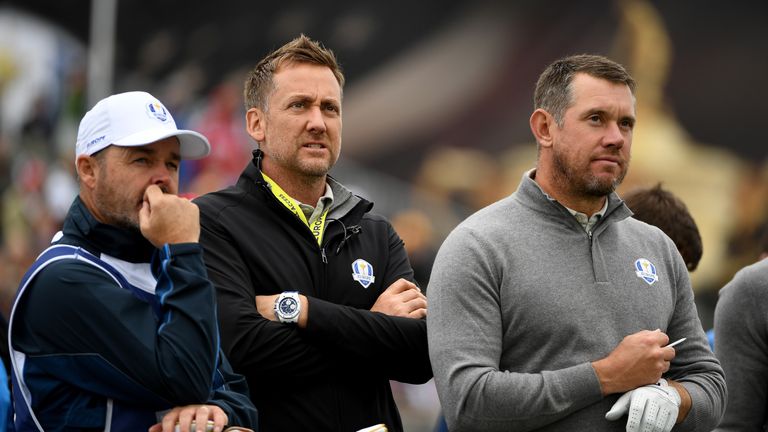 Ian Poulter and Lee Westwood have played in 66 Ryder Cup matches between them.

The United States Ryder Cup team is packed with youth and a half-dozen first-timers in this iconic event.  The European team will try and counter that youth with age and experience.

There’s been a changing of the guard in American golf and this will be the first Ryder Cup in recent memory with Phil Mickelson or Tiger Woods playing for the U.S. side.

Captain Padraig Harrington’s European squad is just the opposite.  He has a lot of familiar names with a wealth of Ryder Cup experience.

Lee Westwood has played in 44 matches and at age 48, had one of his best seasons last year on the European Tour.  Ian Poulter, age 45, has been a long-time thorn in the side of American captains and he’s starred in 22 matches.

Sergio Garcia is 41 and that’s the exact number of matches he’s played in.  Add the three together and you’ve got 107 matches played.  That’s a LOT of experience.

By the time the Sunday singles roll around, look for Westwood to pass or tie Phil Mickelson for the most Ryder Cup matches played — 47.  England’s Nick Faldo played in 46.

When it comes to Westwood, Poulter and Garcia, Westwood pointed out what they have in common:  “I think all three of us are very passionate about the Ryder Cup and we hold it in very high regard.  We give it our all when we’re involved.”

Garcia has given it his all and then some — he’s the all-time Ryder Cup points leader with 25 1/2 scored for his European teams and this is his 10th.

A lot of Garcia’s success comes as a result of unselfish, team-first attitude:   “I’ve always said it.  I’d rather go 0-5 and win the Ryder Cup than 5-0 and lose it.  That’s not going to change. It doesn’t matter.  The most important thing is that Europe plays well, that we give ourselves the best chance to win the Cup, and that’s the goal.

At the end of the day, the European formula for success has been its team chemistry and Garcia confirmed that:

“I guess chemistry, how you feel,” Garcia said.  “We’ve had some good matches that we’ve won and then we’ve had some ones that maybe we haven’t played as well.  It just comes down to how you feel that week, and more than anything, just kind of being there for your partner, enjoying your time with him, and the good and the bad and the ugly.  Just enjoy it; it’s as simple as that.

On the same note, Westwood gave his reasons for his longevity in this event:

“I think I get on pretty well with everybody. If somebody partners me I’m pretty straight hitter of the ball. I hit a lot of fairways, hit a lot of greens. That’s sort of what my game has been renowned for. I do make putts when I need to, despite what people’s opinions might be.  I just try and make my playing partners comfortable and let them just do what they’re doing. That’s really what I learnt from playing my first one with Nick Faldo. He just let me — he was there to back me up, and I knew he was always going to be there, and just let your playing partner get off and express themselves.”

Chemistry and comradery.  It’s been a staple of the European team.

This go-round, throw in age and experience.