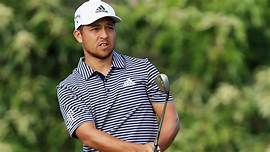 Xander Schauffele couldn’t have asked for a hotter start on Friday at the CJ Cup — seven birdies over his first nine holes at Shadow Creek.

Schauffele started his day on the back nine, birdied every hole except 10 and 12, made the turn in 29 then added one birdie coming home for the week’s best round — an eight-under par 64 that got him the 36-hole lead at 14-under par.

“Couldn’t have had a better start,” Schauffele said after signing his card.  “When we made the turn, the pace of play really slowed down and we were standing around too much,” he explained as he lost that momentum over the final nine holes.

He goes into the weekend three shots better than first round leader Tyrrell Hatton.  Hatton had an up-and-down round.  He was going in the wrong direction late in the day.  He bogeyed the 15th and 16th holes to fall back to nine-under but birdies on his final two holes got him in the house with a 68 and an 11-under par total.

The only other player in double digits under par was Russell Henley.  He shot 68 to get to 10-under.

Brooks Koepka started finding his mojo on day two.  He shot 68 and was all smiles even though he was 12 shots back of the lead at two-under.

Defending champion Justin Thomas got himself in position for a weekend run with a 66 that put him at six-under.